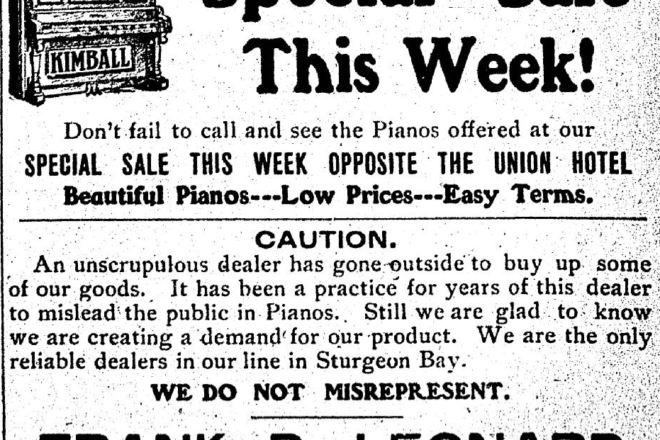 THE FLOOD has at last come. The weather has been very warm during all the present week, Tuesday and Wednesday considerable rain fell, clearing the snow off in open fields except the largest drifts. Quite a lake formed in the village east of Cedar street, extending nearly four blocks, filling cellers and making the streets impassable. No losses of consequences were sustained by water in the cellers, except Feldman & Cochems lost between $300 and $400 worth of groceries.

The canal has received a new name. So much annoyance and inconvenience was caused to the canal and telegraph companies last season, on account of the names “Sturgeon Bay” and “Sturgeon Bay Canal” being so near alike, that it became important to have a change in name, to avoid the trouble in mistaking telegrams. The canal officials decided this week upon the name of “Minorville” as a slight acknowledgment of the appreciation of Mr. Minor’s service. So, Minorville, after this, it is.

Henry Hopp succeeded in bagging a lynx last week, which weighed about thirty-five pounds. The animal was shot near Whitefish Bay, the hunter being one of a party spending a week at Clarks lake. “Jonah” holds an enviable reputation as a sportsman, having spent his younger days chasing game in the wilds of Sevastopol, his native town. More of these animals are occasionally seen in that locality.

The family of Capt. Wm. Boyd came very near being fatally poisoned by rat poison the first of this week. One of the family had mixed some poison with lard in a pan to kill rats and unbeknown to the one who prepared the evening meal, the pan had been brought in and was used to warm up some food. There was grease enough left in the pan to counteract the effects of the poison which doubtless saved them. As it was several of them were very sick for a short time.

The members of the Masonic lodges of this city are considering the advisability of purchasing the Feldmann block for lodge purposes.

If it is found that the building can be remodeled without too great an expense and if the price is right the question of purchasing will be voted upon at an early date.

On May 26 the new Masonic Temple, in this city will be dedicated. A new $40,000 structure and one of the finest of its kind in the State of Wisconsin.

How proud the local order of Masons must feel of their new home, and just as proud must each and everyone of those who helped make the new building possible feel.

The building was made possible not only through the efforts of the local Masons but through the generous support of all, irregardless of the beliefs or church affiliations. All showed their willingness to help, and in this new Masonic Temple reflects the true American spirit and feeling of brotherhood of each and everyone.

Sparks from the chimney, which ignited the roof, are believed to have caused the total destruction of “The Clearing,” home of Jens Jensen, renowned architect and former landscape gardener, at Ellison Bay Saturday afternoon. In addition to the building, constructed of native timber from adjoining forests, the fire destroyed Mr. Jensen’s library, records and many priceless paintings, etchings and manuscripts accumulated by their owner during his lifetime. The loss is estimated at $20,000, and is only partially covered by insurance.

The fire was discovered by Mr. Jensen as he left the building to go to the mail box, and although the Sister Bay Volunteer fire department responded immediately to the call there was no chance of saving the structure and efforts were devoted to protecting the studio and two small cottages nearby.

Since retiring from active work a year or so go, Mr. Jensen spent the major portion of his time at “The Clearing,” and at times had groups of students in nature study in which he was greatly interested. The only occupants of the premises at the time of the fire, however, were Mr. Jensen and his secretary, Miss Martha Faulkersan.

Temporary living quarters for Mr. Jensen have been taken at the home of Mr. and Mrs. S. S. Telfer of Liberty Grove, and as soon as possible work will be started on the erection of a class room or school for students in nature study. One of the small cottages will be remodeled as a home for the veteran director of the Chicago museum of art, who has also planned and laid out some of the foremost parks in the country.