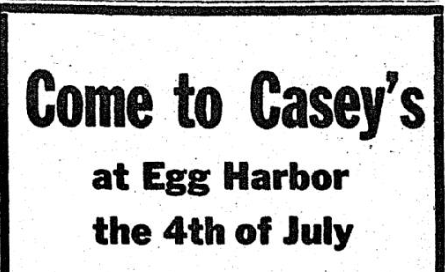 TORNADO MILL BURNED. – The Tornado mill, belonging to Scofield, Leathem & Co., was entirely destroyed by fire last Wednesday. Fire was first discovered under the floor about 9 o’clock, A.M., where it was probably started by a spark from the boilers. There was $2,000 insurance on the premises. We did not learn the amount of the loss. We understand they succeeded in saving most of the shingles piled about the mill.

Independence Day will be celebrated this city under the management of the sons of veterans and Henry S. Schuyler post G.A.R., who will be assisted by a delegation from the camp of the sons of veterans of Menominee. The principal features of the day will be a street parade in the forenoon, and a dance in the afternoon and evening at opera hall. There is also to be a grand display of fireworks in the evening. Let everybody turn out and assist in giving the tail of the American eagle such a twist that his scream will be heard from Squaw Creek to the head-waters of Kangaroo Lake.

While at Fish Creek Wednesday afternoon, and when just about to start for home, Sheriff A. A. Minor and wife met with a serious runaway accident. Mr. Minor was tramped on by the frightened horse and Mrs. Minor thrown out and quite badly bruised. Their injuries are fortunately not of a serious nature. The buggy is a wreck.

PARK PLAN IS MOVING AHEAD

Indications point to the success of the plan fathered by Assemblyman Thos. Reynolds for the selection of some spot in Door County as the site for a park. A bill authorizing the expenditure of $200 for the purpose of investigating and selecting a proper location has passed the assembly and the chances are believed to be favorable for its final adoption.

Assemblyman Reynolds is working hard for the success of this project and is confident he will secure a state park for Door county.

If the “knockers” here at home have any influence the bill will be killed. It seems strange that, in a case like this, where there is a possibility of securing for Door county such an honor as that of being selected as a site for a state park, there should be a single person in the county opposed to the plan. But there are a few here, moved by petty animosity and jealousy, who apparently oppose everything not started by themselves. Fortunately for the general welfare of the people of the county are beginning to see through this opposition and understand its source and motive. Some day the “knockers” will find themselves quietly dropped, and the time is not far distant either.

The special meeting of the County Board of Supervisors will be held at the court house this forenoon.

It is not expected that the session will consume more than one day. The only matter that will be brought before the body will be the question of appropriating the sum of $5000 for the proposed experiment station that the state legislature has appropriated $12,000 to have located in the state park in the northern part of the county.

Another matter will be the question of appropriating a sum of money with which to continue the road repair work in the county. There is need of about $2,500 for this purpose.

There has been no sounding of opinion with regard to the appropriation for the experiment station and it is not known how the members of the board feel on the subject. The project is backed by some of the best known and most progressive farmers in the county, who feel that is a step forward.

At a discussion held Monday evening at the Sturgeon Bay Motors by a number of local men interested in the promotion of aviation in this county, the suggestion of H. R. Jones, proprietor of the Carmen hotel, of sending a plane load of cherries from this county to President Coolidge, met with enthusiasm. The suggestion, however, would not be carried out unless a company is formed here and a plane is purchased.

No definite word has as yet been received by Mr. Bailey in regard to the delivery of the plane and as yet a definite organization has not been perfected. It is thought that the matter will culminate within the next few days.

George Meyer, 92, oldest resident of this town, and one of Door county’s oldest residents, passed away at the home of his daughter, Mrs. Anna Hickey, Sunday evening, death being the result of injuries sustained in an accident the preceding day. The aged man was ascending the front steps to his daughter’s home when he evidently lost his balance and fell backward onto the concrete walk. He is believed to have sustained a fractured skull and he never regained consciousness.

Prior to the fatal accident Mr. Meyer had never been seriously ill during all of his long life. He cast his vote regularly at each election, being exceedingly interested in civic affairs of every nature, and he was a familiar figure on the streets of this town.

Surviving are two children, the daughter, Mrs. Hickey, and one son, William, also of this town; 26 grandchildren, and four great grandchildren.