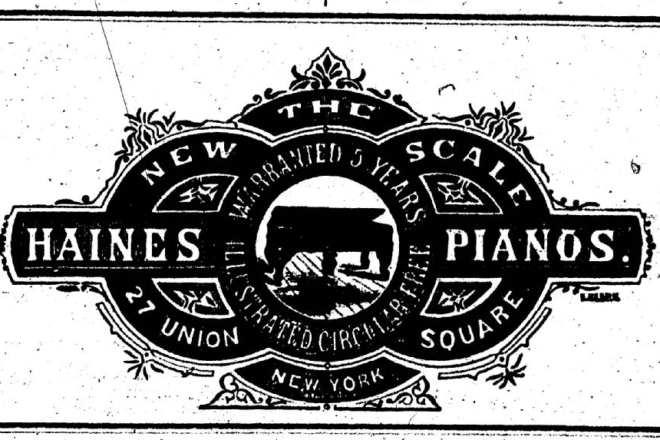 Eight or ten families of Germans arrived at Egg Harbor this week, having purchased a section of land, three and a half miles east of the Harbor. They intend to make farming their business.

Pluck That Tells. – The structure for the temporary light in the bay near the entrance to the canal, took fire last night. There was no one about to see to it, when Mrs. L. R. McLachlan, observing the accident, immediately went out alone in her little boat, climbed the structure, and extinguished the flames. Her rowing gloves were ruined in the adventure, and the Canal company justly owes her the best pair to be found in the market. Our lawyers all stand ready to enforce the claim if there is any delay in its settlement.

There will be about four thousand bushels of apples shipped from this county this fall, something, never before heard of in the history of the county. Usually many thousands of bushels are brought here during the fall months.

MUST HAVE A RAILROAD

Baileys Harbor In Danger of Losing the Proposed Cement Factory Unless A Railroad Is Built to That Place.

In completing its report and taking under consideration the erection of a cement factory at Baileys Harbor, the obstacle of railroad transportation confronts the company. The fact that the company can secure water transportation at that port during the year around is a great advantage, but the men who are furnishing the capital hesitate in placing their money in a factory to be located twenty-five miles from a railroad.

It is to be regretted that there is a probability that Door county is to lose such a large manufacturing plant as the cement factory would prove to be, all on account of lack of railroad facilities.

It would seem as though the time to take some action was at hand. Door county cannot afford to lose such business opportunities. The Democrat believes the proper step to be taken is for a committee pof representative citizens of Baileys Harbor and the other towns in the county to marry a representative of the electric railway company, and also the city attorney, and try to straighten out and come to some clear understanding in regard to the building of the proposed line at an early date.

The cement factory is not the only manufacturing industry that an electric railroad, built to the northern end of the peninsula, would bring, not is it the only one that will be kept out if the road is not built.

Remains of Five Door County People Brought Here for Burial the Past Week.

ARE VICTIMS OF INFLUENZA

Several deaths have occurred during the past week of people who were residents of the city or former residents, all of them having died at outside points.

Clarence L. Benedict, 27, died Oct.17 in Akron, Ohio, where he worked for the Goodyear Rubber company. He married Miss Josephine Garland of this city on June 26, 1915. He leaves his wife and six-month-old baby.

George H. Simon, who was born in Egg Harbor 35 years ago, died at the Marine Hospital in Detroit, Mich., after he was taken ill while serving as a fireman on a coal carrier. He leaves behind his wife and four young children.

Mrs. Frank Sacotte passed away at Chicago after an illness of a short time with influenza. Deceased was born in Nasewaupee, being 31 years of age. She was married in 1907 to Frank Sacotte. The remains will be brought here for burial.

James Cassidy passed away at Detroit, Mich., on Sunday. Deceased was 33 years of age and leaves a wife and one child. Mrs. Cassidy is the daughter of Mr. and Mrs. Magnette of Sister Bay.

Miss Alice Evelyn Mullen died at San Francisco, Cal., at 5:30 on Thursday evening. Miss Mullen was 40 years old, having been born in this city on April 9, 1878. Owing to the health regulations at San Francisco it was impossible to take the body out of the city, hence interment was had at the place of death.

Miss Agnes Jungwirth died at Milwaukee early Sunday morning. Deceased was 27 years of age, having been born in Sister Bay, the daughter of Mr. and Mrs. Joseph Jungwirth. She was taking a course as a nurse at the St. Joseph hospital when taken down with the influenza. After an illness of ten days, she passed away.

The Spanish influenza claimed another victim, Mrs. Chas. Tesnow of Kewaunee, who died in that city on Saturday. The deceased was born in Liberty Grove, August 3, 1883, being Augusta Dorn, daughter of Mr. and Mrs. August Dorn. Besides the sorrowing husband, she is mourned by four small children.

Secure Small Quantity of Moonshine And Home Made Beer as a Re-Sult of Their Efforts.

On Saturday evening the police under the leadership of Officer Parkman made a couple of raids, one of this side and the other in the Fourth ward.

About 7:30 o’clock they searched the premises of Joseph Searth, the new proprietor of the Sturgeon Bay Hotel on St. John street. In one of the rear rooms a quart bottle of moonshine whiskey was found, which was half filled with liquor. This was confiscated by the officers. The proprietor claims that he knows nothing of how it got in the place.

The other place raided was that of Felix Fortempts in the Fourth ward. Here a jar of home made beer was found and a quart of the beverage was taken as evidence. This is to be analyzed to determine its percentage of alcohol. If it is above the lawful requirements of one half of one percent prosecution will follow.

The city of Sturgeon Bay has appropriated a sum of money for the purpose of conducting a rat control program, whereby rat poison will be distributed free of charge to private homes, business places and the city dumps, where rat infestation is a problem. The bait used is one that is poisonous to rats only.

All parties wishing to secure bait will call at different designated points in the city. The localities for distribution will be selected within the next few days.