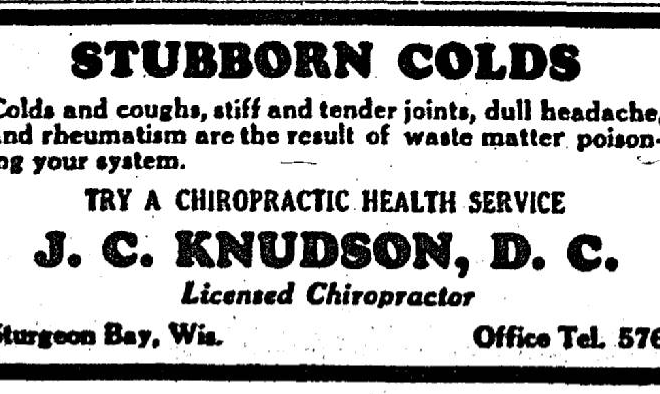 Mrs. Wright of Clay Banks died last week after a long illness from dropsy, leaving a large family of small children unprovided for. Some week since Mrs. Wright made a complaint against her husband for ill treatment while on a sick bed. He was arrested and required to give bail to keep the peace. He took leg bail and fled. The town has been providing for the family for some time. Sheriff Houle and wife have taken a young child, and we understand will adopt it.

The boiler in the saw mill of Blakefield & Co., Fish Creek, this county, exploded Wednesday afternoon about four o’clock with a terrible force, the explosion being heard a distance of four miles. No lives were lost, and but one man injured, a Mr. LeRoy, being struck in the back of the head by a flying piece of timber and knocked down but not seriously hurt. The cause of the explosion, we are informed, was turning water into the boiler when it was empty, and very hot.

Dr. A. H. Chandler left for the north Wednesday. Look out for sea serpents and snake stories. He started for Sister Bay but it is doubtful if we will be able to get past Line Erskine’s.

Quite a sensation was created last Sunday when Rev. G. M. Colville of the First Presbyterian church, at Racine, stopped Miss Suzanna Roberts when partly through with the solo “Ave Maria,” saying it was not a fit song for a protestant church. Miss Roberts who has a rich contralto voice, will appear with the Cochems’ Grand Concert Co. at Opera House, Oct. 16.

THERE IS NO INFLUENZA HERE

During the past week there have been numerous rumors to the effect that the Spanish influenza had obtained a foothold in this city and reports were circulated that there were half a dozen or more persons who were ill with the disease.

Health Officer H. C. Sibree was interviewed on the subject and stated that there were no cases in the city to his knowledge.

Dr. Sibree urges the people to take every precaution possible, however, to guard against the disease. Care should be taken to avoid getting wet feet. Houses should not be permitted to get too cold as it is dangerous to become chilled. Neither should the room be too warm. A temperature between 65 and 68 is best.

Another thing that the health officer wishes to impress upon the public is the habit of spitting on the walks and in public places. This should be stopped. Another thing he wants to call to the attention of the individual is that when obliged to sneeze or cough, this should be smothered in a handkerchief to prevent spreading of the germs of the disease, should the person by any chance have the malady in any form.

100 Enroll In Smith For President Club

According to Elmer C. Christianson, secretary of the Door County for Alfred E. Smith for President Club, the membership drive is progressing nicely. Over 100 members have joined the club thus far, it is stated.

Speaking before an audience of over 500 persons in the high school auditorium, Sen. LaFollette opened the Progressive campaign in Door county last Thursday night.

Among other statements he made the senator stated that “in these times, when war threatens the peace of the world, we demand the United States be kept free to work out its own domestic problems. We must not repeat the fatal mistake of being led to the brink of war by secret diplomacy and hidden commitments.”