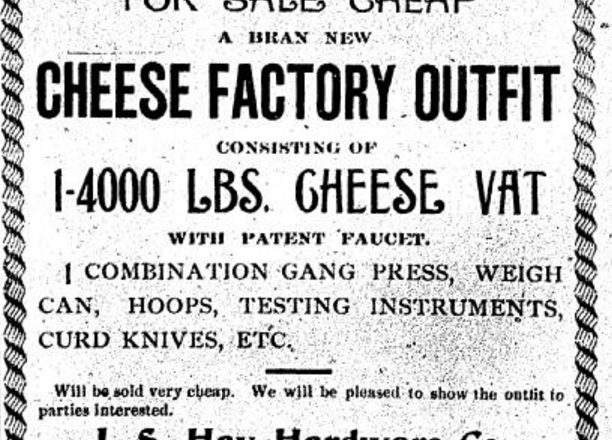 A tramp passing through this town asked one of our citizens if he knew where he, the tramp, could obtain work? This was the way he asked for the desired information:  “Say mister, I don’t suppose you don’t know of nobody who don’t want to hire somebody to do nothing for nobody, do you?” The reply was: “Yes, I guess not.”

After experimenting for some time, during last winter, Capt. Ed Cox concluded that it is not practicable to construct a steam ice-boat for the navigation of Green Bay, although it is said that such vessels have for several years been in use in Germany and other European states. Costly experiments have been made at Escanaba, with results similar to those of Capt. Cox, it being found that a boat capable of withstanding the rough usage to which it is subjected upon the uneven surface of our bays must be too heavy for actual service.

I. Pleck is making preparations to build an addition to his bottling works. It will be of solid brick and constructed on the north side of the present building extending the east front from 24 ft. to 50 ft. This addition is to make room for additional bottling machinery for putting up and steaming various kinds of Milwaukee export and fresh beer.

A new water-works system was tested on Monday and Wednesday and found in perfect order. On Wednesday four streams were used with nozzles from three-quarters of an inch to one inch and a quarter and no difficulty was experienced in throwing water over the Cochem’s store and Democrat office buildings. All property within a radius of 1,000 feet of the new pipe line will have good fire protection hereafter, and Wednesday’s test shows that four or more streams are available at any point within two blocks of Court and Pine streets, where the system is laid.

Chief of Police Hall and officers Parkman and Schroeder raided the Andrew Berenson home in the Third Ward Wednesday afternoon where it was alleged a gallon of illicit liquor and the boiler and coils of an old still was found.

Berenson was placed under arrest and when brought before Justice Dehos pleaded guilty. He was fined $100 and costs, which he claimed he would be unable to pay and was given until today, Thursday, to attend to business matters before being placed in jail to serve out his sentence.

The raid was made up on complain of J. Nipert who alleged that Berenson was in his store Wednesday morning and when leaving stole a ring of bologna. In searching the premises for the bologna, the booze was found and confiscated by the officers. It is stated that the bologna, too, was found.

EGG HARBOR – Paul Bertschinger and Bill Johnson are the undisputed bowling champions of this village as the result of four matches rolled at Sturgeon Bay and Algoma against Spencer Eames and Len Olson, in which the champs garnered 1750 sticks, and the latter 1630.