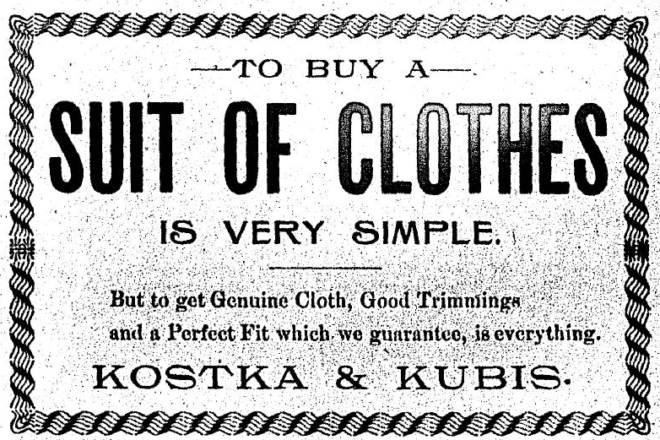 The Indians of Dakota and Nebraska are organizing for a general onslaught on the whites. Gen. Custer is lively in making preparations to repel them.

On the first of January Albert Jacobs took charge of the saloon belonging to Mrs. J. P. Graass and which was formerly rented by Arnold Wagener. Mr. Wagener will devote his entire time and attention to the duties of the sheriff’s office.

Little outside of routine business was done at Tuesday nights council meeting, with the exception of appointing W. S. Reynolds school commissioner for the third ward. The council will soon be up against some pretty big propositions in the proposed public improvements which will require no little executive ability.

And now comes information that meat markets in this and other counties are to be inspected by agents of the state dairy and pure food department, because it is suspected that adulterated sausage is being made.

The law defines what constitutes pure sausage and sets the fine for a violation at not less than $25 nor more than $100.

For this district the investigation will be made by deputy J.B. Linzmeyer, of Green Bay, whose district takes in Door, Brown, Manitowoc and Kewaunee counties.

Mr. Linzmeyer is the inspector who a few weeks ago caused a conviction in this city for violation of the dairy law.

If we are ever to expect anything in the industrial upbuilding of the city we must have better train service.

Before the war we were given a Sunday train and the Cherry Special during the tourist season. The past year we had nothing and now it is planned to give us less.

During the past year the company enjoyed the best business since it has been in operation. The establishment of a couple of government shipyards in this city has greatly increased the incoming freight receipts and the taking off of a couple of steamers of the Goodrich line during the summer no doubt improved outgoing traffic.

The business men of this city and county are entitled to an exclusive freight and passenger service. A short time ago there was a campaign on for a railroad to be built to the northern end of the county, which is made to appear ridiculous if the line between this city and Green Bay is not a paying proposition with the towns in the northern part of the county as feeders.

Dilly-dallying along and being bluffed from year to year has been the way Sturgeon Bay and Door county have been treated.

If this is the result of government control, the sooner the government lets go the better it will suit all concerned up in this neck of the woods.

HAVE WOLF HUNT ON CHAMBERS ISLAND

Party of Nine Try To Run Down Killer

A wolf hunt on Chambers Island was one of the thrills enjoyed the past week by a party of nine from this city on Saturday and Sunday. Those participating were Jos. Schauer, W. E. Wagener, A. W. Miller, A. B. Minor, Frank Pleck, Leo Schauer, Thos. Tong, John Nelson and John Walker.

During the past week or two there have been several deer killed on the island and Caretaker Fairchild came to the conclusion that a timber wolf was responsible for th depredations. He got in touch with Jos. Schauer of this city, who is the owner of wolf hounds of high quality and a successful hunter of these animals, and gave him the privilege of picking out his own party to round up the marauder.

The dog got on the trail of the wolf the first day, but no one of the party seen the wolf.

Sunday another hunt was started and two of the party seen the animal, a large timberwolf, but failed to get a shot. The beast was too smart, and it is believed that its size scared the dogs when it turned on them.

It is believed that the wolf is the only one on the island, evidently having crossed the ice from upper Michigan.

The Brute is having a feast of venison, as the island is populated with deer, one of the hunting party having counted 52 animals in one day, which is only a small portion of what is on the island.

Efforts will be made to rundown the wolf during the winter, as it is realized that it will have to be killed to save the deer.

Another outside plane has failed to find the Door county airport, and again the necessity of an airport, as pointed out by Dr. Dan Dorchester and other flying enthusiasts, is brought home forcibly. The latest proof of the necessity for more adequate facilities came two weeks ago when a pilot from Racine flew his mother up here, and failing to spot the field, finally landed near East Maplewood. Fortunately he picked out a fairly good field, and encountered no difficulty in landing.

Let’s not allow Door county to lag behind on this important project. We need an airport, and we need it for this summer. The benefits to be accrued by the county are too far-reaching to let the proposal die.