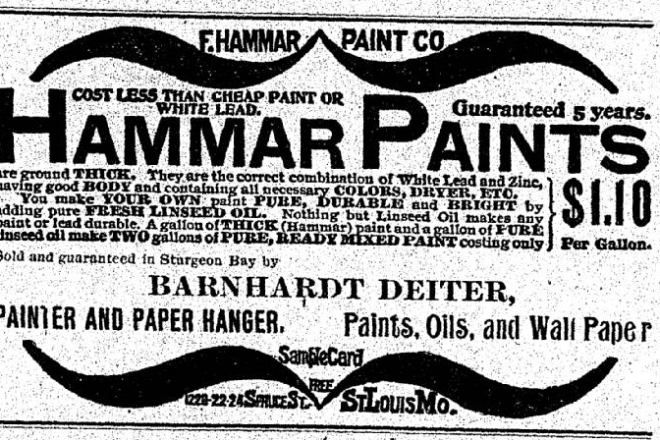 During the storm of last Saturday evening, a ball of fire came down the spout leading from the eve trough to the cellar in A.W. Lawrence’s residence. Mrs. Lawrence was in the cellar at the time, the ball of fire passing directly in front of her. Mrs. L. was terribly shocked and did not recover from the effect for two or three days. No damage was done the dwelling, except one spout being torn loose.

Ephraim is well supplied with boats this summer – the Corona, Depere, Moore and City of Green Bay all stopping regularly at this place. It is also quite a summer resort, being visited every year by people from Chicago and Milwaukee mostly, and no wonder for no finer scenery can be found on the shores of Green Bay than here.

Our sister city of Ahnapee took unto itself a new name Thursday. We will now have to call it “Algoma.” As a result, persumably, the Record says they have an “epidemic of boils” over there.

A dozen or more farmers from the Kolberg German Lutheran church came here Thursday with their teams for the purpose of hauling brick for their new church. There will be 45,000 in all and three trips will be made to convey them to the location of the new edifice.

The hardware store of Scofield Co. was last week burglarized. The depredation was committed on Tuesday night, July 2d, but was kept quiet in hopes of apprehending the offenders. About ten dollars in change that had been left in the cash drawer was taken, but as far as could be seen nothing else was missing.

It is supposed that the work is that of some boys who wanted money to spend on the Fourth.

The main traveled roads of the county have been oiled during the past few weeks. And what a difference a little oil makes. It is certainly a blessing to the motorist as well as the resident along a highway with heavy traffic. What an impression it must make on a tourist to enter a county with roads so perfectly free from dust!

Roads can be kept oiled at a nominal cost. The county highway department should continue its good work.

Salesman is Advised To Get Out of County

A magazine salesman who worked in Door county last week was given the opportunity of making himself scarce in these parts or of facing a charge of indecent exposure, when he was picked up by police Sunday. He chose the former course and the “head man” of the group of salesmen promised he wouldn’t again be permitted to return to Door county. Action was not pressed by the police for the reason that the two married women involved did not wish to enter formal complaint and appear in court. The women were playing tennis at Municipal court near the bathing beach Saturday when the salesman drove up in his car and asked permission to watch them. Later he was noticed removing some of his clothing and the women got into their car and drove away before anything further developed.