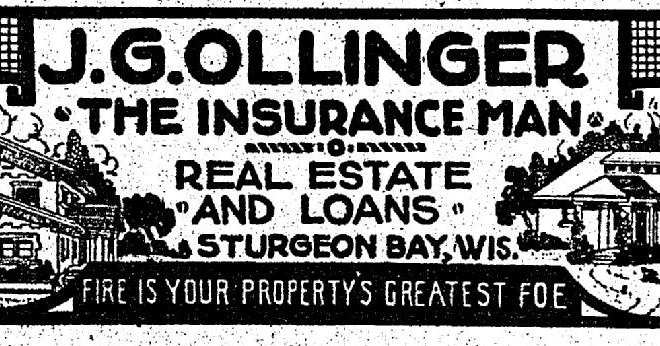 An out-door bake oven belonging to Mr. Duchateau, Post-master at Dycksville, was struck by lightening during the recent great storm and completely demolished.

An ancient copper spear-head was found last week on the farm of Asa Thorp, at Fish Creek, the discovery being made by Milton Thorp while plowing in a field above the bluff. The relic is nearly five inches long and has a socket for the reception of a shaft. The copper appear to be unusually hard as to indicate that it was tempered by its maker, but this opinion will need confirmation. Some of those who have seen the weapon believe it is the work of the race that preceded the Indians, and their belief must be accepted as at least probable if it is shown that the copper has been tempered by human agency.

On Monday the contract was let to the lowest bidder for building the new school house at Fish Creek. Seven sealed bids were received, two from this city, three from Baileys Harbor, and two from Fish Creek. The bid of Freeman Thorp of Fish Creek was found to be the lowest and the contract therefore awarded him, the exact figures being $678.00. The details of the specifications we do not know, but understand that the building will be first class in every particular.

Wednesday morning, Senator Stephenson’s yacht, the “Bonita,” arrived at Fish Creek from Marinette with the following party aboard:

Early luncheon was served at Thorp’s Hotel where the party was joined by a number of Fish Creek and other Door County people, including Hon. Thos Reynolds, Dr. Eames, Henry Fetzer, Frank Long, Herb Peterson, Frank Wellever, John Bertschinger and a number of other. After the splendid repast the party all entered carriages for a drive through the proposed park site, the greater portion of the land in which has been optioned. The first stop was made at Eagle Bluff lighthouse, and from there through the woods to “Shanty Bay,” then east and south to the southern line of the proposed site, which is the mail road between Fish Creek and Ephraim, and back to Fish Creek. At 6:15 the party again set out and went up on “School House Bluff” to view the glowing sunset from this great height, from where it seems one could leap right out onto the Strawberry Islands. The entire party were entranced with the beautiful view from this point.

Gov. Davidson said inpart: “We live for future generations. The beautiful spots should be preserved, and I take my stand now, and also before the next legislature,in favor of State Parks.”

There is only one thing that can now prevent Door County from securing the grandest of all State Parks, and that will be a “hold-up” by some of the landowners. There are a few men who are asking and insisting on a price from two to six times as much as the land is worth. Properties of little value a month ago are now almost priceless.

It is hoped by the people of Door County that the State Park will not be lost through the avarice of a few, but that they will reconsider and option their properties at what it is actually worth.

Nearly a month has passed since the draught set in, yet no one seems to be suffering. Business is going along as usual. Saloons are being converted into other lines and the profiteers are getting what formerly went to the liquor dealers.

An unpopular chord was struck week when it was hinted by a summer resorter in a letter to the Chamber of Commerce that nails and tacks were evidently being strewn along the highways in Door county due to the fact that a number of tourists were complaining of tire trouble.

Statements made by garage men and tire repair men throughout the county contradict the statement, the majority of whom claim that of all the nails and tacks found in tires this season, there has not been a new nail or tack found.

One garage man in the heart of the summer resort district went as far as to say that in his number of years of experience he has found the same tourists year after year are complaining of the trouble while others pass over the roads time and time again without any unusual annoyance from this angle.

Humanity will probably benefit to an incomparable degree as the result of a bequest made to the research department of the University of Wisconsin (for the study of cancer) under the provisions of the will of the late M. W. McArdle, a native of Baileys Harbor. Mr. McArdle passed away May 16, 1935. A bequest of $10,000 was paid to the university on June 17, last past, and on Tuesday of this week when the estate was up for final settlement, 1,000 shares of Chicago Flexible Shaft stock valued at $49 plus per share and a one-fifth interest in Maxwelton Braes, Baileys Harbor summer resort, appraised at $91,767.50, were turned over to university authorities.

The inheritance tax paid into the office of Door County Treasurer Emil Miller before the estate could be settled up, amounted to $3,830.60, the largest such tax ever to be paid in Door county.