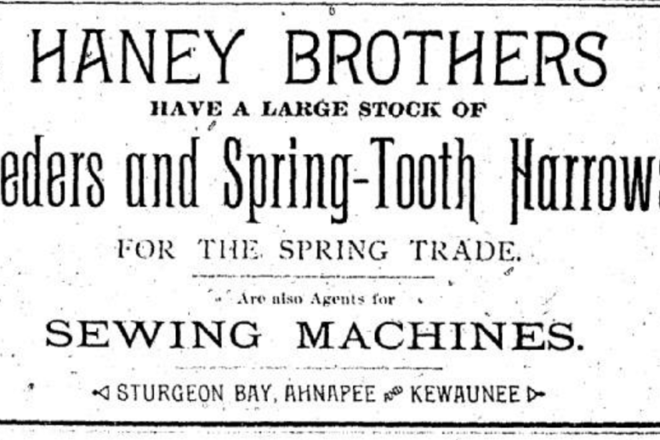 Our boys beat the Modocs at Ahnapee last Saturday in the match game at base-ball pretty badly. The Peninsulars scored 136 to the Modocs 31 – Harah for the Peninsulars! We’ve heard of other tribes of Modocs getting worsted in fiercer and more determined engagements than that, They say they’ll not give it up so; but will gather up their scattered forces, recruit their strength a little, and try to improve upon their skill and drop down upon the Peninsulars in about a month and go home singing, “We routed them we scouted them and put them all to flight.”

Peter Hahn has quite a mechanical curiosity in his cigar store which has been attracting considerable attention. It is a figure of a man holding a cigar holder, and when a cigar is inserted and a match applied his highness smokes away with all the nonchalance of an old timer. It is quite amusing for both the young and old folks.

The alleged smallpox epidemic in the town of Brussels, and across the line in Kewaunee county, is reporting to be spreading very fast. A traveling man who was in the city Wednesday stating that while he was there he learned that there were between forty and fifty cases. This may have been exaggerated, but nevertheless, if it is spreading fast it will only be a question of a short time before it will reach this city.

PANKRATZ MILL ON ITS LAST RUN

Marks End of a Former Great Industry in Door Co.

Steam was raised at the Pankratz mill Monday after lying idle nearly two years and on Tuesday a small crew began cutting up the broomsticks. This will doubtless mark the end of the sawmill business in this city and what was the means of starting the town and maintaining it for many years now is a thing of the past. What will be done with the plant is not known although it has been reported that it will be torn down and move to some other place.

The bulk of the lumbering industry was ended in this city and county some years ago but logs were brought here in rafts from northern Wisconsin and Michigan which prolonged the sawmill business in this city. Notwithstanding the loss of this important industry the city has grown and flourished and in its place has come an ever increasing and productive agricultural and horticultural community, together with the stone quarries, canning factories, etc., which will always make Sturgeon Bay an important city in this part of the state.

The organization of the Department of Explosives, Door County Council of Defense, has been completed, with L. J. Meverden as the chairman. The duty of this department is to regulate the use of all explosives and to keep them out of the hands of enemy aliens. There is a representative of the organization in each community and before any explosive can be purchased a permit must be issued by him. No dealer will be allowed to sell dynamite or any other explosive, unless a permit is shown, by the buyer.

W.D. PHILLIPS IS KILLED BY FALL FROM WINDMILL

Wendell D. Phillips, veteran well-driller, was killed on Thursday forenoon of last week, when he fell from the tower of a windmill on the fruit farm of Christ Hansen in the town of Nasewaupee.

He was getting ready to drill a well and was being assisted by Hans Halvorson, who was employed by him, and Mr. Hansen. Mr. Phillips was in the tower trying to disconnect the fan of the windmill, which had got caught in his machine. He told Mr. Halverson to help him with the tractor. The latter started the machine and when he looked up was surprised not to see Mr. Phillips in the tower. He was lying on the ground, unconscious.

He had fallen 42 feel, landing on his back, which is is believed was broken. Three ribs were torn off and punctured his lungs, causing him great suffering.

He was rushed to the Physicians and Surgeons Hospital in the city, but died from his injuries half an hour after reaching the hospital. What caused him to fall is not known, but it is believed he suffered a dizzy spell, to which he was subject.

Seeking revenge for a wrong he claimed had been done him, Joseph Cherney, who is employed on a farm a short distance out of Sawyer, destroyed 42 six-year-old cherry trees on the farm of a neighbor, John Weckler. The tree trunks were sawed through to within a fraction of an inch and broke off easily in a slight breeze.

When called on the case Sheriff Walter C. Olson noticed particularly that the footprints made in the orchard by the culprit were unusually large. Upon questioning by Sheriff Olson the suspect vigorously denied having had anything to do with the destructive work. However, when his shoes fitted the prints in the orchard perfectly, and a saw was uncovered on the farm with the cherry wood sawdust in its teeth, the sheriff believed he had the right man and took him into custody.

After spending the night in jail Cherney decided to confess. Cherney was arraigned in County Judge H. M. Ferguson’s court Tuesday morning when he entered a plea of guilty. He was ordered to pay a fine of $50 and costs of the action, or spend 40 days in the county jail. He chose to “sit.”