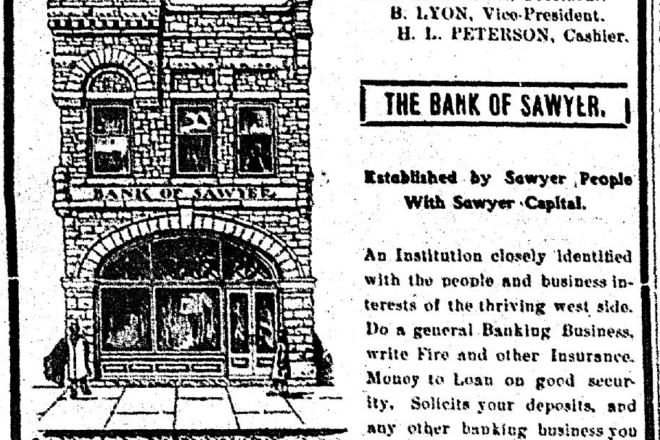 Complaints about “that sidewalk on Cedar Street” have become chronic with our neighbor of the Advocate. Do they find navigation difficult between the saloons?

One of the saddest catastrophes which has happened on the lakes this year occured yesterday morning. The tug Justice Field with the barges Dickenson, Emerald, Dessle and Lillie made the Kewaunee harbor, and attempted to anchor. About 6 o’clock the barge Dickinson broke loose and was soon in the surf, being dashed to pieces. The crew consisted of seven men, four of whom managed to reach the shore, two men and one woman being drowned. At about 11 o’clock the Emerald also broke loose and was soon dashing to pieces. The crew consisting of six men got into the yawl and attempted to reach the shore. When they were about thirty feet from the barge the yawl was overturned. One man managed to reach the shore by hanging on the overturned boat, the others perishing. Seven of the eight bodies have been recovered.

On Friday the numerous slot machines about the city were ordered removed by the mayor and their hum is no longer heard in the land. It would seem queer that it is necessary to compel these gambling devices to be removed by law as the odds are still in favor of the machines, but the desire of humanity is so strong as to obtain something for nothing that the machines continued to rake in a good revenue for their owners, even after it had been repeatedly demonstrated that the player was invariably the loser.

WOULD BUILD AN ELECTRIC RAILWAY

Prospects are Bright, for the Early Construction of an Electric Railway from this City North, Touching All the Leading Points.

While in the city on business a few weeks ago, and in a conversation with the publisher of this paper, J. A. Becker of Milwaukee stated that it would seem to him that an electric road connecting all the towns in the northern party of the county with the city, would be a paying enterprise, perhaps not at first, but would become so rapidly as the resources of the county were developed by the advent of a railway.

Without having gone over the ground except casually, Mr. Becker proposes a line as follows:  Sturgeon Bay to Jacksonport, crossing to Egg Harbor, hence to Fish Creek, and a branch from there to Baileys Harbor, from Fish Creek on up the shore to Ephraim, Sister Bay, and Ellison Bay, with powerhouse about midway.

Those who have relatives in the service in France must not expect to see them for some time. It took over a year to ship the men across and it will take longer to get them back. Boats that were used for transporting troops will be placed in commercial trade. Some of the soldiers will be kept there until stable governments have been established in accordance with the terms of the armistice. This may take a couple of years. Therefore there will be none of them home to eat Christmas dinner.

PAVING MATTER IS UP TO VOTERS OF DOOR COUNTY

The county board at its session yesterday morning adopted, with only one dissenting vote, a highway program which will mean (provided the program is approved by the voters of the county) that Door county will have a system of hard-surfaced roads within a period of three years. The bond issue provided for in the resolution which passed the county board, calls for the sum of $1,095,000 to be raised by sale of twenty-four year funding bonds, and with $615,000 estimated as being the amount of money that will come from state funds, the financing of the project will have been taken care of.

Voters of the county will be called upon at the regular election next April to pass judgment on the program, and if the result of the election is favorable the county board will enter into negotiations for getting the bonds placed so that work may be commenced as early in the season as possible.

That cherries remain popular in the diet of the American people is indicated in a special report released this week by the bureau of census of the Department of Commerce, showing the 100 leading counties in number of cherry trees of all ages. The increase for the country as a whole was 16 per cent, with over three-fourths of the 100 leading counties showing increases. In general, the largest increases in commercial counties were in the eastern areas. Of the 49 leading counties which are east of the Mississippi river, only two reported fewer trees in 1935 than in 1930, and 40 countries improved their relative standing.

Door county is indicated to be the premier cherry county, having 46 per cent more trees than the second county, Grand Traverse, Mich. Four fifths of the total trees in Wisconsin, which ranks fourth among the states in number of trees, are in Door county, the report show. The number of trees in this county increased 40 per cent between 1930 and 1935.

A study of the report shows that Door county has maintained its rank in in number of trees of all ages, trees of bearing age and production since 1929.