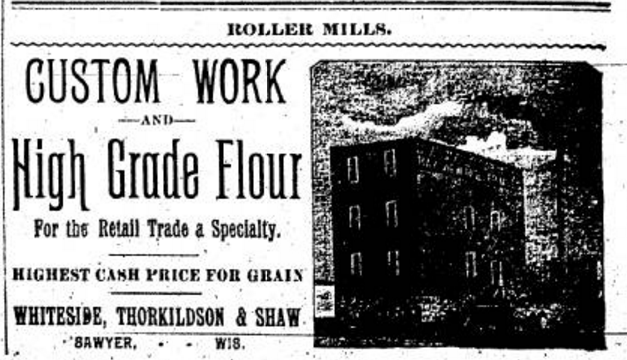 It is evidently a fact by the stir around Wagener Bros. brewery, that the article of beer they manufacture is by no means inferior, nor the sale of their beer second to any house in this region.

Last Saturday was a good day for telephones, five instruments having been located at that time by Henry Overbeck, manager of the central office. These stations are at John Graef’s market, Dr. Sibree’s residence, the Bay View roller mills, the bridge-tender’s office and at Mr. Overbeck’s house. There are now twenty-seven instruments connected with the central office.

Christian Peterson, of Clay Banks, and John Henkel, of one of the adjoining towns, came together in a “scrap” at the dance at Jindra’s hall, Stokes, Monday night over some trifling affair and the following day the former was arrested for assault and battery. He plead guilty to the charge before Justice Dehos, who imposed a fine of $10 as a punishment, which together with the costs brought the amount up to $26.37, which was paid by the boy’s mother.

The class of “toughs” that at times invade the halls at the average country dance and disgust everybody with the despicable displays of rowdyism are becoming fewer within the past few years but there are still altogether too many of them left and an occasional arrest and fine goes a long way.

State Officials to Visit This County Early Next Month

Selection of a site for the proposed state park in Door county will be taken up this spring by the Wisconsin State Park Board. The members of this body will arrive at Sturgeon Bay some time during the fore part of May for the purpose of inspecting the various sites which may be brought to their attention and selecting the one found most available…

Tracts of contiguous territory comprising anywhere from 500 to 2,000 acres will be considered in selecting the proposed site, although if found suitable and at a reasonable price, more than this will be taken….

Anybody in the county who has in mind a suitable tract of land for this park site or who wishes to call attention of the Park Board to the advantages of any particular site is invited to correspond with this office.

Jno. Boler, cashier of the Door County State Bank, was down to Chicago for the week end, returning Monday morning. Mr. Boler says everything is war and automobiles in Chicago, with Billy Sunday as one of the present leading attractions. Thousands turn out to hear the great evangelist every day, and there are never any vacant seats in the huge tabernacle.

Gallon of Liquor Seized By Police

The G. A. Huck barn was raided Monday morning by Chief-of-Police Hall and Officers Parkman and Schroeder. As a result it is alleged that a gallon of “moonshine” was found after an hour’s search of the premises.

For some time it is alleged by local authorities that complaints have been made by parents that their sons were obtaining booze from that source.

Water Front Park May Be Created Near Bridge

For the purpose of further beautifying Sturgeon Bay, a study is being undertaken by the Door County Chamber of Commerce of the cost of filling in and creating a park on the water front in the area between the new bridge and the elevator and docks on the Sawyer side of the bay.

The idea advanced by F. N. Graass is to make use of the equipment of the Ferd. Roher Construction Co., now engaged on the Little Lake project, to widen and deepen the channel leading to the west side docks. The dredgings would be dumped as a fill and covering the area from the bridge approach south, which is now most unsightly and of no use except as a dumping ground.