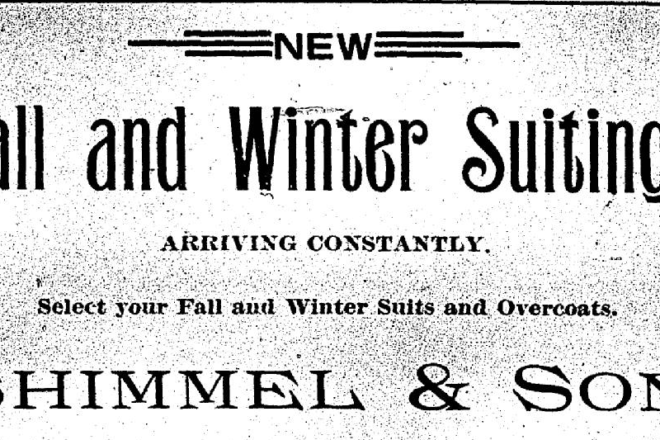 Mr. Sawyer has contributed $25 toward building a Methodist parsonage in this village. Every Methodist is now expected to vote as Sawyer directs. This, with all other contributions received, foot up $40 all told. This sum multiplied by 40 will give a sum sufficient to make a start.

Nelson & Spear are selling excursion tickets good for one week, from Sturgeon Bay to Milwaukee and return over the Milwaukee & Northern road at $8.65; To Chicago and return the fare is $11.95. This includes admission to the expositions at both cities.

Kicked by a Vicious Mule.

Henry Boness, an employ of the Sturgeon Bay Brewery Co., was kicked directly on the chin and seriously injured by a vicious mule on Wednesday morning. The company owns a tract of wild land east of Bayside cemetery, and on Wednesday morning set several men to work clearing up the same. The men were pulling small poplar stumps with a team of bay mules, recently purchased, and Mr. Boness was directly behind one of them fastening the chain to a stump when the brute kicked at him, striking him full on the chin, inflicting a terrible gash, and inuring the flesh and bones of the face in a very painful manner. Dr. J. S. Tweddle was called, dressed the wound, and did everything possible for the unfortunate man.

On Wednesday the friends of Antone Brey gathered at his place and assisted him in a barn raising. Mr. Brey’s new barn is 40×72 feet, 16 foot posts, and a hip roof. This barn is being erected to replace those destroyed by lightning about six weeks ago, at which time Mr. Brey not only lost his buildings but also considerable machinery and some stock.

The seating capacity of the high school is 252 and there are 276 students enrolled. Of these 126 are boys and 150 girls. It was necessary to double up putting the seats together in some instances and adding another row or two for the accommodation of the increased attendance.

During the past week an additional typewriting room was installed in the gymnasium to handle the increased number of students who are taking up this line of work. There are 66 pupils in this class, 20 of whom are advanced pupils, this being three times as large as last year. This necessitates the putting in of overtime by the teachers and scholars, the first class beginning at 8:15 am. The Domestic Science class is also so large that this feature is carried on until 4:30 pm in order to handle the work.

The great demand for stenographers on account of the war has induced many of the students to take up this study at this this time.

Henry Mann, who left a short time ago for Hollywood, Calif., returned to this city Saturday after going through a favorable try-out for the movies at that place. Mr. Mann is now on the waiting list and expects to be called back to Hollywood about January 1st, or as soon as they have an opening for a character of his ability.

Mr. Mann is quite enthused over the country in that vicinity and while away visited a number of cities in Mexico.

Up to 9 o’clock Tuesday morning, the Sturgeon Bay police department had issued 235 licenses to bicycle owners and each owner was given a copy of the new ordinance regulating the use of bicycles on the streets of the city. The police last week designated 4 o’clock Friday afternoon as the time for issuing the first licenses, and the force was swamped with a crowd of youngsters clamoring to be waited upon. License No. 1 went to Gladys Lonzo, N. Court st., and all told the number of licenses issued the first day totaled 202.

Police Chief James F. Hall said Tuesday that he expected the number of licenses issued would go over the 250 mark.