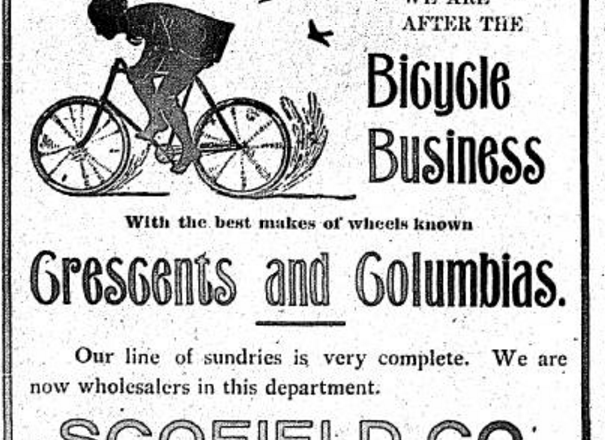 The changeable weather of late has caused large numbers of our people to wrestle with the “epizootic.” The disease is not a pleasant one, but it keeps the patient employed – and that is something these times.

The residents of this city should stop doubting as to whether our railroad is going to be built this season or not, and go to work to do what they can towards helping matters along. They should take some steps toward securing the right of way through the county. If some of our local business men would turn out and devote a little time to this matter no doubt the right of way for road could be secured at a more reasonable figure than if the company does all the work.

The Opera House is being decorated and put in first class shape, a good hardwood floor being down on the list of important improvements. Then roller skating, which has been dead for years in this city, will be revived. The skates now used differ considerably from the old style kind, ball bearings being one of the important features in roller skates of the makes of today. Some of the leading skates in use have only two rollers, one at the toe and heal, instead of the ordinary four roller kind. M.J. Peters is taking orders for these skates, furnishing them at actual cost. The new floor will be laid in the hall as soon as the renovating and decorating is completed.

When addressing your letters for the rural delivery drop the “F” and write simply R.D. The government has decreed that hereafter the service will be designated as plain rural delivery, dropping the word “Free.”

ECHOES FROM THE TUSCANIA

The commander in charge of the soldiers who were on board of the Tuscania, the troop ship sunk by the German submarine, of which Chas. Soukup of this city was one, tells of the nerve displayed by these hardy young Americans, who while lined up two hours awaiting their turn to be taken off the sinking craft and sang songs such as “On Wisconsin,” “Columbia,” the “Star Spangle Banner,” and other familiar pieces.

Sgt. Soukup is said to have been one of the last of those to leave the boat, being rescued by one of the English torpedo destroyers, which went to the aid of the endangered comrades amid an active bombardment from the submarine.

Bridge Hearing Will Be Held In Next Two Months

A hearing to determine the necessity of the proposed 1,700-foot bridge at Sturgeon Bay will be held within the next two months, it was decided late Monday by the state highway commission. The commission last spring rejected the proposal on the grounds that sufficient funds were not available and that there was some question as to the legality of the state paying part of the cost.

With the hearing set within this space of time a committee of county and city officials should be appointed to work with the Highway Commission to do research work and secure data to submit at the hearing.

NO CLUES YET ON PENINSULA FEED STORE ROBBERY

Burglars who broke into the Peninsula Feed store in Sawyer last week Thursday and did great damage to the safe there, were still at large apparently for no clues as to the identity of the persons had been uncovered, Police chief James Hall reported at noon Wednesday.

The thieves, who took nothing, missing $28 in an envelope and 48 cents in pennies, rolled the safe out to the warehouse where they finally abandoned their efforts in opening it. A new safe will have to be purchased.