Prognosticators say that we are to have twenty-six snow storms this winter, each one to last three weeks.

A new sidewalk has been built along the east side of Church street between St. John and Cottage streets. By the way, the city is becoming pretty well supplied with sidewalks and this season has seen more built than any before, which speaks well for the growth of our town. All the walks are built in a good substantial manner and there are a few places that cannot now be reached without stepping off the walk.

The streets and private yards bear evidence to the fact that Thursday night was Hallow’een. About the usual number of depredations were committed. Wood piles were toppled over, gates lugged off and left in odd places, while the rascals even went to the trouble of taking up several heavy plank cross-walks in different parts of the city and toppling over out buildings.

The apples raised in Door county are of an exceptionally good quality. Owners of orchards realize the importance of cultivation and spraying, which is the secret success in apple culture in Door county, and this has been brought about principally through the efforts of D.E. Bingham and A.L. Hatch, who are recognized throughout the state as authority on fruit culture.

The History of door County as compiled by Mr. Holand will be a standard reference work for many years to come. Mr. Holand spent nearly two years on the work, searching the records of the county since its organization, going to Madison several times to look up data in reference to the county in its early history, and delving into the past….

The two volumes are bound in leather, have a very neat typographical appearance, and is a work that the people of Door county can well feel proud of. 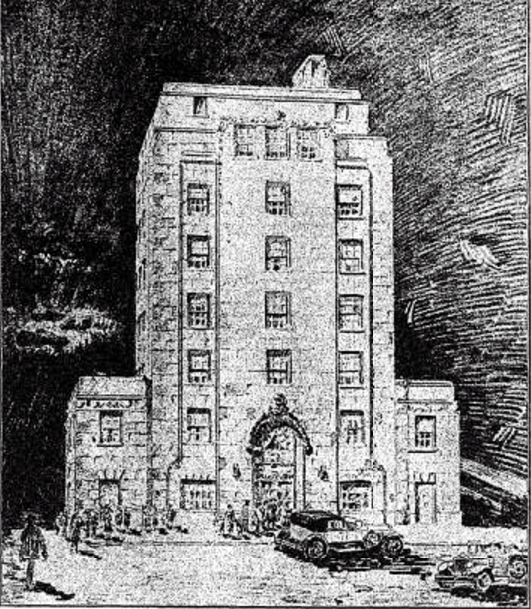 The above is the architect’s conception of the $250,000 hotel which the Harry R. Jones Co., Inc., propose to erect on the site of the present Hotel Carmen. According to present plans bids for the construction will be opened between the first and middle of November and it is expected that work will commence shortly after the first of December, and will be completed by the first of July, next year. Charles Reynolds, former Sturgeon Bay boy, is the architect. The city’s Board of Appeals met Oct. 29 and voted unanimously, at the request of Harry R. Jones, to remove the city’s 60-foot height limit for the proposed hotel.

FISH CREEK – Bert Barringer, local milk man, didn’t realize what a surprise he had in store for him when he unlocked his cow barn one day last week. He was about to go to his regular morning duties but found that the population of the barn females had changed during the night.

One of the bovine ladies had had triplet heifer calves during the night, and being of the shy and retiring nature attributed to her breed, had not informed Bert. One of the calves has since died, but officials in charge of the county bovine lying-in wards still think it’s some kind of record.