Although soccer may not be the most popular sport in Wisconsin, it has become the most noteworthy at Sturgeon Bay High School, particularly the boys’ team. Growing interest among the youth has made it not only popular, but very successful, as the team has dominated conference play and has made a number of runs deep into the postseason. The program has also spawned some individual success stories. 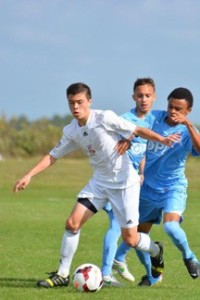 As Lenius works through preseason training, he knows that his first year will bring new challenges. Foremost may be the physicality of this level of soccer.

“One of the harder things to overcome will be my size,” said Lenius, who is listed as one of the lightest players on the current St. Louis roster. “All of the upperclassmen have been on a steady weightlifting program where I have been on my own for the most part to strengthen myself… everyone will be bigger, faster, stronger.”

Lenius also mentioned that some other initial challenges will be the speed of play at the next level, as might be expected, and the hot temperatures in St. Louis.

“It’s been in the 90s for the majority of the time… I have to make sure I’m getting the proper fluids into my body to make sure I am ready for every training.”

Stevenson identified a similar learning curve looking back on his freshman season.

“I would say the most challenging part of my freshman season was matching the physicality and speed of the D1 college game. I’m on the younger end of people in my class, so many times I would be playing guys three to four years older than me. That is usually the biggest difference whenever I have reached a new level in soccer,” said Stevenson.

He also mentioned that he has paid special attention to fitness, health and technical ability handling the ball, and he feels that he enters this season with greater mental toughness after a year at the college level, a year in which he led the Panthers in goals and was named to the Horizon League All-Freshman Team.

Both players have high hopes for their individual and team futures. Lenius says that he fits perfectly into the St. Louis system, and he believes the team can win a national championship within the next four years. Stevenson looks forward to scoring more goals and winning more games, with a league championship and an NCAA Tournament berth on his team’s to-do list. 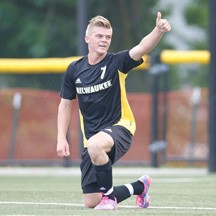 Lenius and Stevenson both had very successful careers in high school, so much so that both decided to forego some of their time playing for Sturgeon Bay to play at an elite level for F.C. Wisconsin of the U.S. Soccer Development Academy.

Lenius, who played two seasons at Sturgeon Bay, was an All-Conference selection both years. Stevenson played three years at Sturgeon Bay, and led the team in goals all three years, setting the school record for goals his junior year and garnering a number of awards along the way.

Despite ending their high school careers early, their time with Sturgeon Bay soccer created a platform to take both players to the next level.

“High school really showed me how much I love the game. I bring up those memories all the time with my friends,” said Lenius. “High school was a huge part of my life where I strived to get better. I got better, and I was seen by a dream organization at SLU.”

Only time will tell, but Division 1 college soccer might not be the ceiling for either of these players, and they will certainly not be the last athletes from Sturgeon Bay soccer to find success at higher levels.

Lenius’ Billikens begin play with an exhibition game against Jefferson College on August 15. Stevenson and the Panthers play their first game on the same day in an exhibition at Loyola.