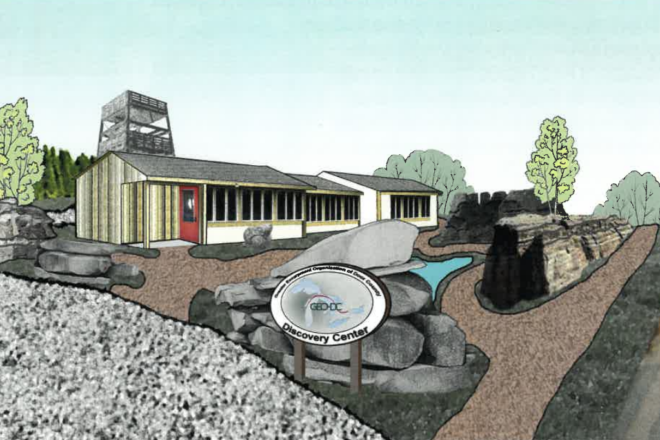 The Greater Escarpment Organization of Door County (GEO-DC) has big goals for the long-neglected building on Highway 42 overlooking the bluff that dives into Ellison Bay. The group hopes the Escarpment Discovery Center will become a beacon for geotourism and a tool to educate the public about the sensitive nature of the peninsula’s 1,000-mile backbone.

“The whole idea of something like this fits in with the ethos of what Liberty Grove seeks to accomplish, which is to keep it as pristine of a ecological area as possible and have people appreciate it that way,” said Lou Covotsos, member of the GEO-DC board, from inside the unfinished building. Blue painter’s tape and paper signs cover the floor and walls, with labels such as “Geology,” “Native Americans” and “Future,” marking out the exhibits and what the center will look like in coming years.

“We like the idea of branding, if you will, Liberty Grove as a greener, educational destination for nature,” said Nancy Goss, another GEO-DC board member.

Unlike other nature organizations in the county, that branding will be geared to every level of escarpment-lovers, featuring a designated research room where interns and archaeologists can clean fossils and visitors can engage with the gamut of research papers and scholarship on all aspects of the escarpment.

“As an international interpretive center, we want this to be a repository, electronically and in print and in human beings, of everything that we can pull together on the escarpment and what it means in a cultural point of view, an economic point of view, a social point of view,” Covotsos said.

The center will feature a walk-in bat cave, motion-activated migratory bird videos soaring overhead, and interactive flora and fauna. Outside, there will be recreations of the escarpment on the Highway 42 frontage and, in the final phase of the project, an observation tower with panoramic views over Ellison Bay and the waters beyond.

GEO-DC formed in 2012 and has done some programming on the escarpment in the years since, but the leap into a brick and mortar interpretive center is partly in response to Door County’s Canadian sister, the Bruce Peninsula. Tobermory, Ontario is home to what is now the only Niagara Escarpment interpretive center in the world, welcoming more than 400,000 people through its doors each year.

“We’ve come to the conclusion that if we don’t do this somebody else will,” said Covotsos. “It cries out for what we’re doing. Something has to be done to not compete with but be the counterpart in the U.S. to what they’re doing in Canada.”

Covotsos and Goss also sit on the Liberty Grove town board, which was originally going to kick in for purchase of the property, with plans to house a visitor center there as well. Some town residents pushed back on the idea of the town partnering with a private nonprofit and putting up taxpayer dollars for the property and the town walked back on that plan. But purchasing the property privately has its own benefits.

“Once we divorced politics from the mix, everything was able to move at relative lightning speed,” Covotsos said.

But the group is still sensitive to the paradox of bringing thousands of people to explore the pristine ecological ethos of the region.

“People who would be attracted to what we call Geotourism don’t really leave a large carbon footprint to begin with,” Covotsos said. “The last thing we’ve talked about is ‘heads in beds,’ that is not what we’re about.”

The group is primarily enlisting volunteers to renovate the building, with total costs estimated at $1.4 million. Although the space boasts a few resources and exhibits now, they don’t plan on opening it to the public until they can create a strong first impression, hopefully in 2019.

Until then, GEO-DC hosts workshops and programming with other organizations in the county. To learn more about GEO-DC, see their upcoming events, or donate, visit geo-dc.org.