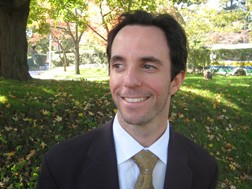 On Nov. 15 and 16, Marc Tyler Nobleman will facilitate a writing workshop and give a presentation for Gibraltar Middle School students as a part of the Friends of Gibraltar theme, Write On, Gibraltar! The student writing workshops will focus on the skill of drawing readers in by writing compelling opening lines for both nonfiction and fiction. Focusing on single lines of writing is particularly motivating for reluctant writers.

A community presentation with Nobleman is also scheduled for Nov. 15 at 7 pm at the Door Community Auditorium.

Nobleman is the Maryland author of more than 70 books including the critically acclaimed Boys of Steel: The Creators of Superman and Bill the Boy Wonder: The Secret Co-Creator of Batman. Both books reveal previously unpublished bombshells (the result of years of detective work) and are Junior Library Guild Selections.

Boys of Steel was one of 75 (out of an eligible 6,000) honored as an American Library Association Notable Book; was named to multiple “best of the year” lists; and was featured in a USA Today cover story.