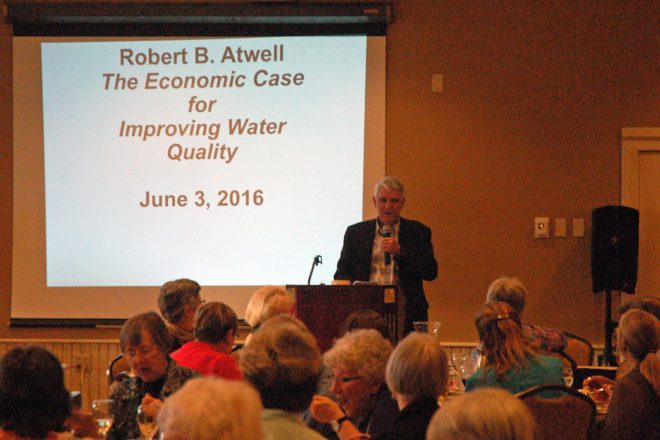 Bob Atwell, chairman and CEO of Nicolet National Bank, speaks about the economics of water quality during the opening night of the annual meeting of the League of Women Voters of Wisconsin at the Landmark Resort on June 3. Photo by Jim Lundstrom.

Describing himself as “an economist by training and a banker by trade,” Bob Atwell, CEO of Nicolet National Bank, opened the annual statewide gathering of League of Women Voters, held at the Landmark Inn in Egg Harbor June 3-4, with a challenging talk on the economics of water quality.

“It’s part of my job to really think about issues that really matter to the futures of the people here,” Atwell began in a talk that asked everyone to set aside their rhetoric and politics in order to correct the massive regulatory failure that has led to being surrounded by impaired waters.

“This isn’t a room that needs to be told that Wisconsin has very serious problems with groundwater and surface water. But there are still many people who don’t know or don’t care about this problem,” he said. “Sometimes I get people asking me as a banker, why is this your issue? First of all, I’m a citizen. And I’m pretty sure most of the people and businesses in urban northeastern Wisconsin have little idea they will bear the cost of about $1 billion in capital expenditures in an attempt to reduce phosphorus in the Fox River basin and Green Bay. We live in the world’s richest center of fresh water on Earth. Of all the places on Earth, it is truly mind boggling we should have problems with the quantity and quality of fresh water here.”

As an example of the often monumental dysfunction between science, legislation and policy, Atwell brought up the 80-year margarine war that was waged by the U.S. dairy/butter industry beginning in the late 19th century and continuing until 1967 when Wisconsin became the last state to repeal its quaint anti-margarine laws.

“We like to think we are smarter and more sophisticated today than in the past,” Atwell said. “I wonder, and I’m sure you wonder, if this civic optimism lacks empirical foundation. Anyone studying the current political climate should wonder if we really are more sophisticated.”

Atwell maintains that federal subsidies and political mandates have hastened changes in rural and small town life, all of which has helped to create an inexorable drive to “get big or get out.”

“It’s hard to understand why federal policy has had such a bias toward scale,” Atwell said, before mentioning some of the explanations he has heard for industrial farming:

More troubling, Atwell said, is that those benefiting from these economies of scale then use their money and political muscle to drive policy slanted to their continued benefit.

Referring to the phosphorus impairment of Green Bay, Atwell said, “We have arrived at the point where the federal government is telling us how to clean up the bay, which is not a compliment to the way we govern ourselves, right?”

Utilities from Appleton to Green Bay will pass on the cost of up to $1 billion in upgrades to deal with point source pollution to their customers in what Atwell said amounts to “a very regressive form of taxation” that will come to “about $2,000 for every man and woman and child in the lower Fox basin, regardless of their ability to pay.”

Atwell said there is a reason why talking about agricultural runoff – the recognized main source of non-point pollution – in northeastern Wisconsin is a particularly touchy subject.

“When you look at the size of herds by county, there are five counties in the state up in the last 30 years. Four of them are in northeastern Wisconsin.”

Brown, Calumet, Kewaunee and Calumet are the four with increased herd sizes.

“No one I know says agriculture is the sole source of water pollution,” Atwell said. “But there are too many in agriculture denying that cow density and crop density have anything to do with these problems, so that’s really why it’s such a big deal in northeastern Wisconsin.”

Beyond the creative, hard-working people who live here, Atwell said the abundance of fresh water is our most important economic resource, and that the presumed conflict between environmentalism and economic development is false.

One solution, he suggested, might be water utilities charging not just for the delivery of water, but for the cost of replacement of that water as well.

Atwell laid the blame for the continuing problem with both political parties and partisan politics, municipal leaders and the Wisconsin Department of Natural Resources.

“The DNR should show clear leadership,” he said.

Atwell said he was mystified as to why mayors and county executives in the Fox River basin have not made this their priority.

And politicians, he said, have been “an incredible disappointment.”

“Both parties have contributed to the mess in agriculture,” he said, adding, “Republicans have had complete control of the levers of government for over five years. This is their hour. It’s their moment, it’s their responsibility. Buck up and do your job. If Republicans in Wisconsin think they have a mandate to remake Wisconsin as the land of Libertarian-run government, they are not listening to the public.”