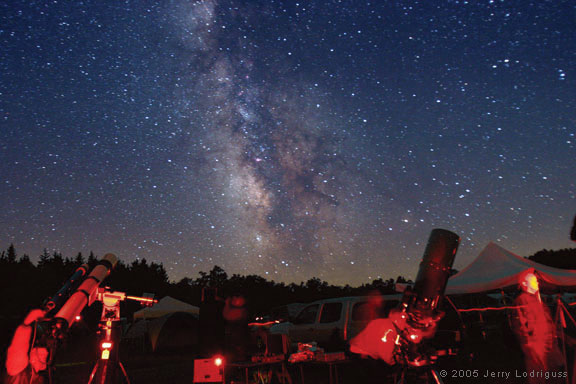 Consider this – perhaps two-thirds of the world’s population is blind to the night sky because of light pollution according to a recent study at the University of Padua, Italy. Light pollution created by street lights, yard lights, and up-pointing sign lights contribute to a light dome effect which literally blinds us from witnessing the spectacular view above. Light domes are large regions of atmospheric luminescence where dark sky should be and which can be seen in a distance over a city at night. Those whose interests lie in the technical will know this as escaping artificial light reflecting off air molecules, tiny airborne particles and water vapor droplets. For the rest of us it means not really having a night time at all. Urban areas have long had this “condition”; the suburbs have moved along to create their own light domes now, too.

Now consider that this tiny emerald isle, situated in one of the Great Lakes, has above it a night sky absent of the flood of man-made light that creates that?light dome effect. While there are over 100 miles of roads on this 35 square-mile island, there are no highway lights, billboards, or shopping malls and yard and house lighting is minimal. Transient vehicular traffic is, of course, minimal too; when you’re here, you’re where you want to be and there’s no need to be driving elsewhere. The restaurants, motels, shops and even the museums and entertainment areas lack the presence of over-lighting. The Washington Island community is conscious of its environment and the need to preserve this treasure and conserve energy resources. It’s a value that keeps life simple and meaningful here.

These magnificent skies were used by the Potawatomi Indians and explorers?like Robert LaSalle and Jean Nicolet for navigation. And, these sky “maps” are still used by contemporary mariners, along with modern technology to guide them through these waters. Unobstructed by the light dome effect, high buildings and other interferences, one can see another phenomena: the?rush of people to the streets and fields to witness extraordinary light shows when they arrive. Imagine an evening where diners leave their meals to join others in the middle of the road to gasp at the silent but powerful light show above their heads. These events are so spectacular that some have talked about hosting a Northern Light festival just for the occasion – a festival dedicated to the dark of night.

Washington Island has a fairly good frequency of clear nights. It’s not unusual for even a cloudy day to turn into a clear night, perfect for what appears at first glance to be a pool of molten lava at the horizon to become the breathtaking glow of a full moon.

Meteor showers pepper the dark velvety  sky with flashes of light for hours of entertainment. While visitors and islanders join at various places to witness these events, one can almost hear a pin drop as those gathered stand in awe of what they witness on those nights. While meteor showers are “events,” it is most common to see shooting stars nightly on the island. All of this entertainment and the experience of being a part of the universe without the need for any device other than the human eye.

For the professional and amateur astronomers, Washington Island has been a landing spot for some time. Stargazing equipment has become more sophisticated and accessible so they have enhanced their views of the heavens with telescopes and software that takes them even a step higher than the average viewer. Their journey entails more luggage, but the?eye-popping, breath-taking result is pretty much in kind with that of the novice comfortably resting across the hood of a car on any given night.

What time of year would you see these great sky shows? Any time of year presents a new and different heavenly performance, even those when there’s a nip or a definite frost in the air. A crisp winter evening presents the?added element of sparkling snow illuminated by moonlit nights. Warm summer night with the cool breezes off the lake and the sound of water gently lapping have lulled many viewers into snoozers. What?a prescription?for better health!

And what of the human impact of such celestial events and experiences? Would we act more civil if humbled by the ability to experience the majesty of our sky? Perhaps life in general could be improved just a little bit if less of us suffered from what one astronomer classified as “Stellar Affective Disorder,” more aptly described as the inability to experience the night sky. Well, if you are “afflicted” perhaps?you need only to journey to one of the final frontiers where the nights still get dark and the sky is the limit – come join us on Washington Island for a night that will move you forever.