Niles Weborg refers to how he came to spend 56 years and counting on the Ephraim Fire Department as “a nice little story.”

“I was going with the fire chief’s daughter, and consequently, I wound up marrying her,” Weborg said. “I didn’t only get a wife, I got a fire department with it.” 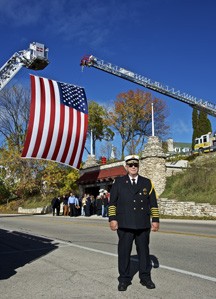 In July, Weborg retired after 34 years as chief of the department, but the 75-year-old isn’t ready to quit fighting fires just yet.

“As long as I’m feeling well and am able to get around, hey, I’ll help where I can,” he said. “I turn 76 in February, but I feel good. The guys are now, ‘Niles, don’t you pull those hoses.’ They watch out for me a little bit. But it’s good to be with the boys and help them.”

Besides, Weborg firmly believes no one is too old or too young for fire service.

“There’s a job for everybody,” he said. “If I didn’t like what I was doing I wouldn’t be around this long. I’m an advocate for being a public servant to help people where I can. That’s why I’ve been here this long.”

Between himself, his father-in-law, his late son Bill (who served as assistant fire chief when he died in the line of duty on Sept. 26, 2004), son Scotty and grandson Nick, there are 160 years of firefighting service from this dedicated and community-minded family.

Weborg spent the first 19 years of his life in Gills Rock, where he learned the commercial fishing business from his family.

Teenage Niles Weborg met Joan Sohns of Ephraim in school (Joan died on Aug. 1, 2008). Her father, William Sohns, had joined the Ephraim Fire Department, which was formed in 1930, when he was 18 years old. By 1957, when Niles was dating Joan, William Sohns was named chief of the department. He also owned one of the four grocery stores that were in Ephraim at the time.

“I was helping him cut meat on the side because a fisherman can always handle a knife,” Weborg said. “He was supplying all the hamburger for Wilson’s. We cut 80 to 90 pounds of hamburger a day for Wilson’s. Needless to say, what he’d do all week, he’d hang up all the boning to be done for the weekend when I got there.”

Joining his father-in-law’s fire department seemed a natural thing to do, so that is what 19-year-old Niles Weborg did in 1959. 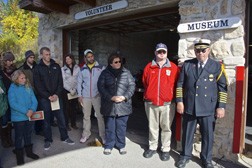 Then-Ephraim Fire Chief Niles Weborg at the Oct. 18, 2014, dedication of a plaque in honor of his son, William Weborg, who was serving as assistant fire chief when he lost his life in the line of duty on Sept. 26, 2004.

“I could see they could use some young blood in the department,” he said. “They did have a pretty good nucleus of guys at the time. What they had for a fire truck was the ’34 pumper that we have in the museum today.”

The institutional history of the department naturally flowed to the new guy on the department. He knows that the 1934 Ford pumper truck – the first piece of licensed firefighting equipment in the county – and the old fire station on Hwy. 42 that now serves as a museum and a home for the pumper were purchased and built for a little more than $7,000.

“On my watch we have purchased seven pieces of apparatus – for a little more than $7,000,” Weborg said. “The last piece of equipment was a truck I bought in ’12, and that was $556,000. It will last a long time. We always say 20 years but I’m sure this truck will last longer than 20 years. It’s stainless steel. Beautiful truck. We had the Cadillac.”

Besides the rising cost of firefighting equipment, Weborg said he has lived to see a greater sense of professionalism among volunteer firefighters.

“The fire world has done a 180 on my watch. When I first started, there wasn’t training. You trained with the people who were on the department,” he said. “Now you have to have 240 hours of training to be a full-fledged volunteer firefighter, this is taking you from entry-level classes to state certification. You can be a volunteer firefighter with entry-level qualifications, which allows you to don an air pack and be on the line in entering a burning building. You do not have to be state certified. That’s an option. If they want to go on and be an officer, there’s officer training above and beyond. Oodles of classes.”

Weborg said he felt prepared for work with the department from his years in the commercial fishing business, and later as a carpenter in the shipbuilding industry. 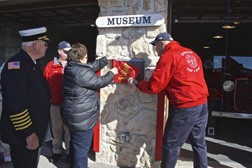 “I was pretty much mechanical minded and was able to pick up on that stuff pretty fast,” he said of his early days on the fire department. “Growing up in the commercial fishing world in Gills Rock, you had to make decisions and you had to make them right now. You didn’t wait a day or two later. Whether I was in the shipyard or fishing, what made me a better fire chief was making snap decisions in a fire situation. I always tell the boys, hey, as long as there isn’t a person’s life in danger, don’t endanger your life. It’s fine to go into a burning building and put yourself between the burned and the unburned, but don’t endanger your life. I said, buildings can always be built, but your life, no. That’s what I’ve trained the guys and told the guys.”

Of all the jobs on the department, recruiting new members is one of the toughest.

“That’s the story of the world we live in,” Weborg said. “I thought it was only here in Door County, but it’s nationwide. We were in bad shape in Ephraim for a while, but now we’re up to 18 people.”

Weborg said he had groomed his son, Bill, to take over as chief.

“I would have stepped down as chief years ago,” he said. “Bill was my assistant chief before he passed away and would have been chief long before now. When he passed away, my other assistant chief was John Cox. It really hit him because he and Bill were pretty close. He resigned after that. But if anything good happened with my son going down, it is that the fire departments in northern Door County have become closer knit, which definitely makes a better operation by far.”

He mentions that when Bill was alive, he operated a business in Egg Harbor, and also served on the Egg Harbor Fire Department as well as Ephraim’s department.

“So when Bill passed away, the guys in Egg Harbor – Justin MacDonald, Bobby Mueller Jr., Mike Meyer and Terry Havel – said we’re coming to help you out in Ephraim. So that’s where I got these guys. Bill will be gone 11 years in September, and they’ve been with me since. They’re good on their own. I can see they can handle situations and crises and whatever comes around.”

Justin MacDonald stepped in as fire chief when Weborg stepped down on July 1.

“Justin can handle it. He’s alright,” Weborg said. “I’m still with the department, but I said I’m not going to micromanage, but if they’re going too far awry, I might be there.”

The Village of Ephraim will celebrate Niles Weborg’s 34 years as fire chief at an open house at the village hall from 3 to 6 pm on Saturday, Aug. 29. All are welcome to celebrate Weborg’s firefighting career. Cake and beverages will be served.