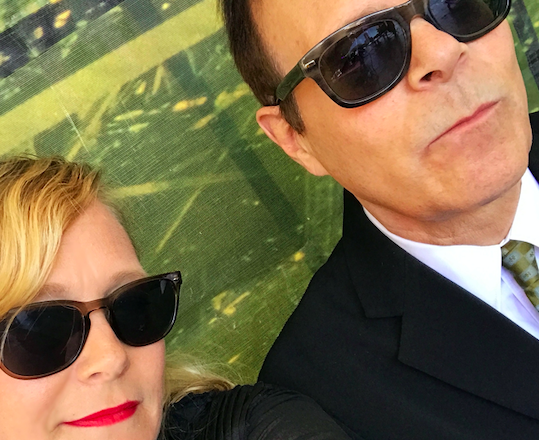 Tickets for the March 13 show are $15 and are available for advance purchase at holidaymusicmotel.com or by phone at 920.743.5571. The doors at the Tambourine Lounge in Sturgeon Bay will open at 7 pm; the show will start at 7:30 pm. Visit NineteenThirteen.com to learn more. Submitted.

When cellist Janet Schiff was learning to play, she became mesmerized by her teacher’s 1913 Romanian cello. She knew she had to have it one day.

Eventually she had hounded him long enough that he sold it to her.

In 2010, she started NINETEEN THIRTEEN, a cello-and-drum duo named after the year the cello was made. The group has included several drummers over time, but it really came together when Schiff met Victor DeLorenzo, the founding drummer of the Violent Femmes, while she was working as a server in a restaurant.

Though DeLorenzo is well known for his time with the folk-punk Femmes, he was trained in the jazz tradition, and he fit so well with Schiff that he’s been locked into NINETEEN THIRTEEN for the past five years.

“Jazz drumming is the only form of music where the drums can have an interactive, improvisational dialogue with other instruments,” DeLorenzo said. “A lot of times – whether it be rock music, punk rock, country music or different kinds of folk music – the drums are primarily there as a rhythm instrument to provide time. Whereas in jazz, the drumset player is allowed to expand and improvise with other musicians.”

After beginning his jazz and classical instruction at 16 years old, DeLorenzo became skilled in beat brush percussion, a style of playing using brushes. It’s what he became known for while playing with the Violent Femmes and what he’s carried over into NINETEEN THIRTEEN.

Schiff plays the cello amplified with a looping system through which melodies can be layered. She never arrives with pre-recorded loops, though – she always creates them live for the audience.

DeLorenzo said the duo likes to augment the music with other players and instruments – bass, guitar, flute or whatever suits each song – and guest artists often enhance recordings.

“We like to be malleable in that way,” DeLorenzo said, “and it carries on the jazz tradition, which is dear to our hearts in that you have people sit in from time to time.”

NINETEEN THIRTEEN was built on a foundation of music that Schiff had written prior to DeLorenzo joining her. He’s helped to flesh out Schiff’s music, and they’ve begun to add vocals and lyrics. DeLorenzo said the mix is about 75 percent instrumental and 25 percent vocals.

The songs have structure, but they also leave room for improvisation. In those instances, players must really be listening to the other musicians on stage – something that DeLorenzo said he looks forward to.

NINETEEN THIRTEEN’s sound had been described in a number of ways. Schiff has called it chamber rock, but DeLorenzo said he’d probably take the side of the listeners who say it’s more eccentric, like time-travel or sci-fi rock.

Both players are from Milwaukee and have kept their duo close to home, waiting to travel out of state until they could find a booking agent who was the right fit for them. DeLorenzo is happy to report they’ve found an agent, and NINETEEN THIRTEEN is looking to start booking out of state as early as this summer.

In the meantime, the duo is playing at the Tambourine Lounge in Sturgeon Bay on March 13. DeLorenzo is known to narrate the shows, so he said the audience can expect some tongue-in-cheek humor.

“I try to embarrass Janet as much as I can,” DeLorenzo said. “But I think what the audience can look forward to is some bona fide good music – good, creative, modern music that is original in style, form and presentation.”

Tickets for the March 13 show are $15 and are available for advance purchase at holidaymusicmotel.com or by phone at 920.743.5571. The doors will open at 7 pm; the show will start at 7:30 pm. Visit NineteenThirteen.com to learn more.