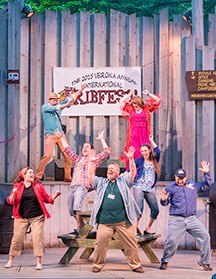 The cast of Northern Sky Theater’s, ‘No Bones About It,’ during a recent performance.

No Bones About It, this year’s new show premiering at Northern Sky Theater, is well worth seeing. Those who remember reading Romeo and Juliet in high school will especially enjoy the comic parody of Shakespeare’s classic, particularly the famous balcony scene which is staged on the Peninsula Park amphitheater in a far less romantic setting.

Just as Dave Hudson successfully collaborated with Colin Welford on last year’s new show Strings Attached (a parody of Comedy of Errors), working with Paul Libman and again Welford, he has created this year’s Shakespearean spoof, No Bones About It.

Rather than laying our scene in fair Verona, Italy, the story takes place at the International Rib Fest in Verona, Wisconsin, with two famous feuding barbeque joints competing for a cook-off prize: Adam Capp, the owner of Cappy’s Happy Pig, just happens to have a daughter Julie, and Karen Montaque, the owner of Monty’s Jurassic Pork, is the mother of Ronny. Both young people have recently been disappointed in love – you already know the story.

No Bones About It, after a slow beginning, rapidly picks up speed and romps toward a resolution at a breakneck pace. Perennial Northern Sky favorite Doug Mancheski plays Adam Capp, amusing the audience with his signature antics. And Eva Nimmer portrays the innocent winsome Julie, who falls in love with Chase Stoeger’s guileless Ronny (coincidentally the pair portray yet another set of lovers in this year’s return of Strings Attached).

Larry Friar, the owner of Friar’s Spices (get it?), serves as the sponsor of the event. The judges, who are blogging foodies, offer comic caricatures of social media obsessives.

Two delightful scenes become showstoppers. The first is the balcony scene, with Julie looking pensively out the window of a small house trailer as eager Ronny conceals himself behind a barbeque grill (accidentally burning himself), and sings “A Light Through Yonder Window.”

But clearly the audience favorite was a flashback to the ‘80s scene with Mancheski’s Capp in a mullet wig romancing and classic retro-move dancing with Karen Montaque as disco queen.

One measure of success of a musical is the presentation of songs that audience members sing to themselves leaving the theater. Such is the case with “Move On,” a light-hearted exhortation to forget lost loves, and especially, “Better Keep Away,” a tongue-in-cheek warning to steer clear of forbidden love.

The opening night audience enjoyed this family friendly fare performed in a clearing surrounded by towering trees that reach toward a star-filled sky.

No Bones About It, offered in repertory this summer with When Butter Churns to Gold and Strings Attached, is performed Mondays and Fridays at 8 pm, and Wednesdays at 8:30 pm. For tickets call 920.854.6117 or visit northernskytheater.com.