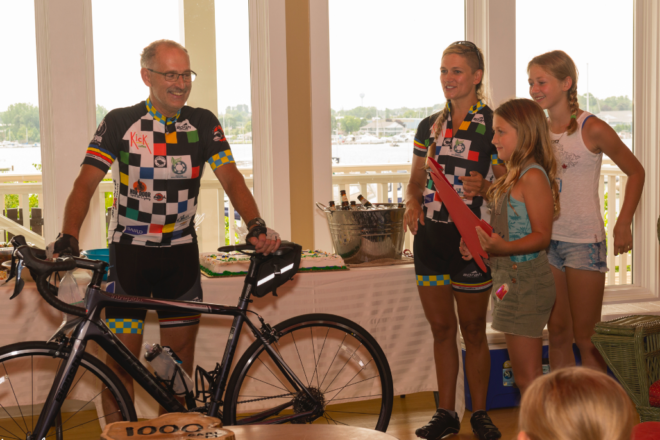 Carl Morrison was all smiles when he was surprised with two new bikes from his daughter and granddaughters after riding for 1,000 consecutive days. Photo by Alisa Landman.

He once rode 225 miles in a single day. He rode 100 miles every day for 12 days, just to see how long he could do it. When he broke his collarbone in a bike crash he rode another 10 miles, and continued to ride in the days that followed using one hand as his collarbone healed.

And for 1,000 consecutive days and counting, the 59-year-old has ridden his bike from his home in Sevastopol to commute to work, to challenge himself, and simply to have fun.

“I planned to ride every day for a year, but I just kept going,” he said.

It helped that he rarely gets sick, and his wife Sherry encourages his riding. His daily commute to work at ExacTech in Sturgeon Bay is 17 miles round trip, and he makes it through rain, wind and snow every day.

“My co-workers complain I make them look bad when they can’t make it into work in winter,” he said.

On day 1,000 on Aug. 20, dozens of friends and family surprised him on his Sunday morning ride, joining up with him along the route  to support the man cyclists call “The Legend,” with a special surprise at the finish line. Econo Foods donated a cake, and his daughter Lisa Turner, with help from donations and a steep discount from Broken Spoke Bike Studio in Green Bay, presented him with not one, but two new bikes.

“I haven’t had a new bike since high school, and she got me two of them,” Morrison said. “It was incredible.”

Turner said he deserved it not just for his streak, but for the helping hand he lends to other cyclists. Morrison volunteers with the Door County Silent Sports Alliance, at bike safety events for kids, and encourages new cyclists every chance he gets.

“I am so proud of him,” Turner said. “It shows you that you can do anything you put your mind to.”

Morrison was touched by the new Bianchi road bike and Salsa fat tire bike, but also by the signs and support from friends who turned out with signs along the ride.

“You know, you try to be a good person, and you don’t realize what you’re doing until something like this,” he said. “ I’ve got a lot of really great friends and family.”

Morrison, who has ridden since the 1970s but more seriously since he had to give up running 15 years ago, now aims to make it three straight years of riding before he stops to take care of two bad knees and a bad hip.

“It’s like his therapy,” Turner said. “He definitely enjoys riding alone in addition to our group rides. He really encouraged me to use riding it as an outlet to relieve stress and stay fit.”

Riding through wind, sleet, snow and ice may not sound therapeutic, but it’s all just part of the ride for Morrison.

“Every day is a good day to ride, except some days are better,” he said.