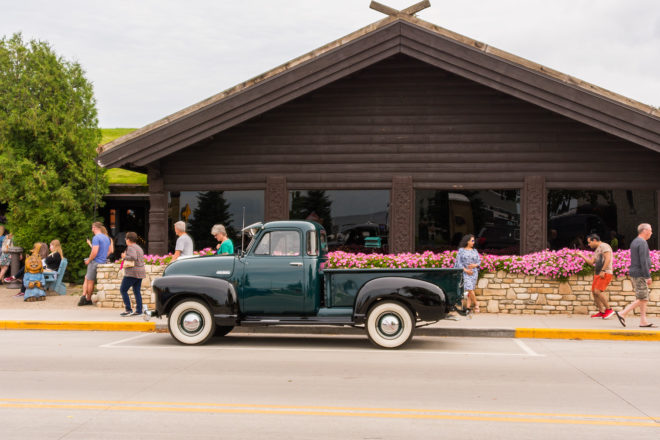 Axel Albert Otto Johnson was born in Chicago in 1925, and grew up in what his friend Norb Blei described as “one of the toughest neighborhoods: 12th and Blue Island.”

Al learned responsibility young. Years ago, Rolf came across a very old passport belonging to Al with the notation, “Conductor, make sure these two children are delivered to the captain of the ship, MS Gripsholm.” Al recalled that when he was six and his sister, Mildred, was four, they traveled alone from Chicago to Vännäs, Sweden, to spend two years with their mother’s parents.

Al’s work ethic was established early, too. By the time he was 12, he spent his summers at a family friend’s cabin in Appleport, picking strawberries and cherries. His lifelong love for animals was also evident early. When his dog was not allowed in the cabin after an encounter with a skunk, Al slept with him in the doghouse.

Later, like most Door County kids, his summer job was working in a restaurant. He washed dishes and cooked at Johnny’s Cottage, owned by Johnny Vieth. (Al advised young people to learn to cook because they could always get a job – and a free meal – anywhere in the country.)

At 19, after a year at Marquette University, Al enlisted as a paratrooper with the 101st Airborne, worked in Army intelligence and, as a member of the Army’s track team, ran 880 meters just 4/100s of a second shy of the world’s record.

He returned to Marquette after the war, but a year before finishing his degree in criminology and philosophy, he heard that Orin Hanson’s IGA store in Sister Bay was for sale. Johnny Vieth’s advice about buying the extended A-frame and turning it into a restaurant was, “Location, location, location.” In 1949, 24-year-old Al established Al’s Home Cooking.

Business was so slow at first, though, that Al’s daughter, Annika, recalled her dad’s stories of cooking breakfast, cleaning the kitchen and hanging out a sign that read, “Gone Fishing. Help Yourself.” And people did, leaving money in a can. After a year, Al was ready to quit the restaurant business, but his parents sold their Pepsi stock to buy out his business partner. Al Johnson’s Swedish Restaurant was born.

Norb Blei once wrote that Swedish pancakes made Al Johnson, and Al claimed that, as the best pancake maker ever, he made them so thin they only had one side. His mother’s Swedish meatballs also had a lot to do with the restaurant’s popularity. She rolled them by hand for years until she gratefully handed the job to a machine.

When Al returned to Marquette on the GI Bill, he supported himself as a cook at Woolworth’s Five and Dime and learned a process for yelling orders to the cook that carried over to Al’s: The waiters call out orders to the cooks in a particular pattern.

In 1950, 17-year-old Ingert Forsberg came by herself to Chicago from the village of Osterbymoin, Sweden. Her roommate, Malin “Tudy” Ekman introduced her to Door County, and Ingert answered a help-wanted ad from Gordon Lodge. She met Al at the Sister Bay Bowl, and they were married in 1960 and honeymooned in Spain.

It’s well documented that Ingert was responsible for bringing “class” to the restaurant. Norb Blei noted that she “had an instinct for fine taste and Old World harmonies of nature, design and people.” Al told a reporter that “Ingert changed my life. She was absolutely instrumental in where we got with the restaurant.”

Al heard that a Swedish restaurant should be made of logs and have a sod roof. Ingert had a butik across the street, and when they went to Norway in 1972 to hire a designer for a new restaurant building, they incorporated a butik in it. They and local architect George Mangan met with two brothers miles up in the mountains, sketched a building plan on a napkin and sealed the deal with a handshake.

The building was erected in Norway, and the logs were numbered as they were taken down for shipping to America. A Teamsters’ strike was going on in New York when the logs arrived, and there they sat while Al became increasingly upset. One day, as he was venting his frustration on the kitchen phone, a well-dressed customer asked what the problem was and offered to help. The next morning, Al got a call that the logs were on their way, and the mystery man was back. When Al asked how he’d accomplished the feat, he said, “I have no idea what you’re talking about.” The logs went up around the original A-frame while business went on as usual, never closing for a day.

During his decades with the restaurant, Al believed he employed more than 2,000 people, and the waitresses – in imported clogs and traditional Scandinavian outfits – are a big part of the ambience. For years, Al and Ingrid made annual trips to Sweden to hire them, and sometimes they married local boys and stayed on in the county. June Kwaterski, who started waitressing at Al’s Home Cooking in 1949, stayed until her death in 2002, and Gunilla Wilson ran the butik for more than 40 years.

One of the reasons for the longevity – along with the unusually big tips – was Al’s legendary soft heart when employees became ill or needed car needed repairs. Many young people paid for college by working at Al’s. (He finished his degree at Marquette in 1951 and was a tremendous proponent of higher education.) And Al also encouraged capable employees to move on to other opportunities when that was their passion.

Al died in 2010 at age 84, but Al’s goes on, and the still-lovely Ingert spends time at the restaurant run by their children: Lars, Annika and Rolf. In November, Al Johnson’s Swedish Restaurant and Butik was voted the best small business in the U.S.

And there are the stories people never tire of. Winky Larson, Al’s friend since childhood, gifted him with an animal – a duck, monkey, goose, pig – on his birthday every year. They were all returned until the year Oscar the goat appeared and was installed on the restaurant roof – the first of the pampered herd that appears there now.

Al always claimed that he had challenged the prince of Sweden to a chess match and beat him two games out of three. He claimed to be the king of jitterbugging. He claimed to have been the biggest baby ever born in Cook County, Illinois. And Al loved to gamble.

He handled any job that needed doing – and claimed to be the fastest and best – including hosing down the sidewalk, which is what he was doing one day when Winky hollered at him as he drove by in his Cadillac. Al aimed the hose at the car, through the open window and directly onto Woody Herman, who was being shown around before his concert that night at Birch Creek.

Once Al said that his goal was to give people something to talk about besides Ephraim. And he certainly did.