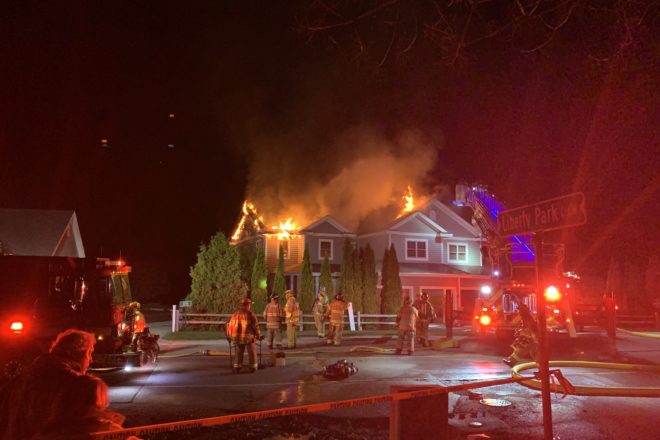 Firefighters from all northern Door County fire departments responded to a fire at the Liberty Park Waterfront Condominiums Saturday, May 23. Photo by Solomon Lindenberg.

The cause is still unknown, but no foul play is suspected

No one was hurt during a fire that broke out at a condominium building May 23, nor was foul play suspected as the cause.

“There is nothing suspicious,” said Fire Chief Chris Hecht of the Sister Bay/Liberty Grove Fire Department.

Damage was done to both of the building’s side-by-side units. The left (south) side was a complete loss. The right side sustained significant damage to the roof structure.

“We had to pull the ceilings down,” Hecht said.

Only one of the units was occupied at the time of the fire; the occupants of the other unit were at dinner.

Neighbors spotted the fire around 9 pm, when flames could be seen from downtown Sister Bay, about one mile away. They notified the fire department.

Landscaping around the units presented an accessibility challenge for the firefighters, Hecht said, but within 45 minutes, he said they had it contained. Firefighters didn’t leave the scene until around 2 am.

Sister Bay Utilities estimated that 50,000 gallons of water were used to douse the flames.