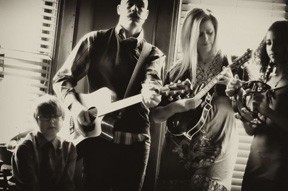 When a band tours, we imagine them going from giant luxury bus to airplane and back to giant luxury bus, playing as many gigs as they possibly can, which means spending the least amount of time possible in any given location.

That’s not what touring means for The Hollands!, a family band that performs original music categorized as a “gypsy folk rock blend.” After living in Sturgeon Bay for five years they moved to Green Bay, and another five years later Craig and Jana Holland sold their house and traded their belongings for a bus/home, named Celu’haven. For the last year, they have been on tour in their new rig, which Craig, who originally hails from Australia, slowly renovates with recycled material and secondhand furnishings.

Jana and Craig always had the desire to play music together, but it didn’t begin to really fuse until four years ago. Their second album, Ashes to Beauty, which incorporates Craig’s songwriting as well as Jana’s, results in a more developed sound.

For The Hollands!, touring isn’t about playing more gigs – it’s about playing music and then getting the chance to integrate with the community. Their kids, 15-year-old Graciana, and 11-year-old Banjo have become a really integral part of the band. Graciana lends her beautiful harmonies to many songs, and plays guitar and piano while Banjo plays percussion.

“We can play a concert and invest in folks from a relationship point of view,” Craig said. “We’ve found it really fulfilling. Our kids get more of an opportunity to connect with other children [in a] deeper [way] than a quick visit for the night. We can look forward to revisiting relationships, such as the venues from the West Coast we toured.”

The Hollands spent their first winter in Celu’haven touring the West Coast, including a month in Oregon. Afterwards, they looped back through Arizona and New Mexico toward Denver, where they left their rig and flew to Australia. Though touring has been amazing, Craig admitted that living in their rig took some adjustment.

“For all of us, when we took off in the bus it was a different dynamic. We were giving up more than just our home and our possessions, but those day to day relationships you get used to. Technology is great, but it’s definitely not the same when you can’t just call up your best friend and see them,” Craig said.

As for the band’s mission to encourage reconciliation – that comes from personal experience.

“We reconciled in our marriage – that was prior to going on the road full-time, and definitely a big part of us deciding to do this,” Craig said. “Our lives are much healthier because of [what we went through] and it’s something we want to share and encourage…encourage people to reconcile differences with one another, whether it’s in a family or a community of folks. Just to see the good in that.”

Craig said, “For right now, it’s definitely what we feel like we should be doing as a family and we’re really enjoying it.”

To learn more about The Hollands! visit http://www.thehollands.org. You can see them play at several venues in Door County before they drive their rig away for another adventure. On July 21 at 5 pm they play at Parallel Winery in Kewanee, and July 22 at 4 pm they’ll be at Gordon Lodge.