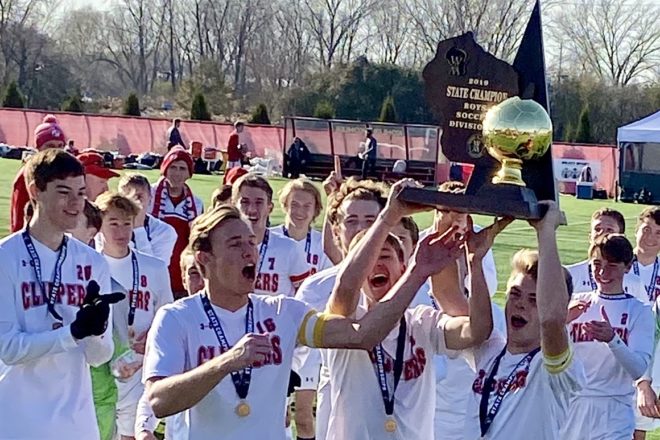 Nearly 86 minutes into the WIAA Division 4 boys soccer state-championship match, Sturgeon Bay’s Carson Dvorak was prone on the pitch holding his head. A little more than 21 minutes later, he used it to win the title.

Dvorak’s header off a corner kick from CJ Fairchild in the second overtime lifted the Sturgeon Bay Clippers to a thrilling, 2-1 win over The Prairie School Hawks on Saturday at Uihlein Soccer Park in Milwaukee. It was the second state title for the Clippers.

Fairchild’s floating service descended at the top of the six-yard box, and Dvorak emerged from the scrum and nodded the ball past the outstretched arm of The Prairie School’s goalkeeper, Devin Stoltenberg.

“I ran to the middle, and my mark left me,” Dvorak said. “I got my head down to about waist level and just hit it, and it went right in the side netting. I can’t even describe [how it feels].”

It seemed Dvorak’s return to the match was tenuous during the 85th minute, when the Hawks’ Nicholas Hawkins arrived late on a loose ball, and an elbow to the head sent Dvorak tumbling to the turf. While Hawkins was sent off with his second yellow card, Dvorak received treatment from the medical staff.

Clippers Coach Todd Maas said that a Clippers fan who is a dentist checked Dvorak’s teeth to make sure they were in place. Dvorak also passed a concussion test administered by the WIAA trainer and re-entered the match at the beginning of the first overtime.

“I knew I was coming back in,” Dvorak said. “It hurt a lot, but I wasn’t going to let this opportunity pass me by.”

Missed opportunities plagued Sturgeon Bay early in the match when the Clippers controlled the run of play and had the Hawks’ defense scrambling. Owen Stevenson hit the crossbar with a shot, and 30 seconds later, Dvorak grazed the post with a shot off a creative set piece.

The Hawks gathered their composure and went up 1-0 in the 26th minute. Hawkins received a pass from center back Francesco Quattrone, dribbled down the right side and delivered a ball that Max Yde headed off the turf and over the head of Sturgeon Bay goalkeeper Joe Wind.

“It’s a lot of preaching to them that it doesn’t matter how many goals we are down,” Maas said, when asked about his team’s deficit and missed opportunities. “We tell them to keep fighting to a find a way to find some more goals.”

The Clippers found their equalizer in the 40th minute on a corner kick, when Fairchild’s service tracked along the goal line. Stoltenberg leaped to deflect the ball with his right hand, but Eli Dietzel redirected the deflection at the far post.

“I started off pretty rough [on corner kicks], and then I got used to it, and we scored off the corner kicks,” Fairchild said. “I always look for that open guy in the back side. I’m usually hitting it to [Carson] or somebody big back there.”

The second half was filled with more physical play than scoring chances. The Hawks seemed content moving the ball up the field via midfield standout Luis Garduno, who carried the ball forward and looked for forwards to connect with, but the Clippers countered with a back line that allowed few scoring opportunities.

“Their biggest threat was their midfield,” Sturgeon Bay defender Adison Benzinger said. “The ability to defend their midfield and pass out of it was the biggest key. There were a couple of times [when] it was kind of scary, but we dealt with it. Our back four [were] amazing, and I give all of them props.”

Sturgeon Bay countered by sending long balls wide to their swift wings, only to have the Hawks’ back line – led by Quattrone and Carsten Ovesen – head crosses out of danger or clear balls down the sideline. The Clippers attempted eight corner kicks during the second half and overtime until Dvorak and Fairchild connected on the game winner.

“It was two teams that were both evenly matched and have a lot of respect for each other,” Hawks coach Corey Oakland said. “It’s kind of like two brothers. You just go out there and slug it out and completely battle each other. Then you shake hands, tip your hats and congratulate them.”

Maas heaped praise on his senior class, which carried his team to a 22-4-1 record and an appearance in the last three state tournaments, including a 1-0 loss to the Hawks in the 2017 final. The Clippers and the Hawks also met early in the regular season and tied 3-3.

“These guys have been playing together since they were little pip squeakers running around on the field,” Maas said. “The pressure was on this year because we always knew this group of seniors was special. If we could do everything right, we knew we had a chance.”

Fairchild, a senior who had two assists in Sturgeon Bay’s 5-1 win over Northland Pines in the semifinal, credited his fellow senior teammates with his outstanding experience.

“I feel amazing,” Fairchild said, unable to hide the emotion in his voice. “I can’t think of a better way to go out with my class because they taught me everything, and I really love them a lot.”