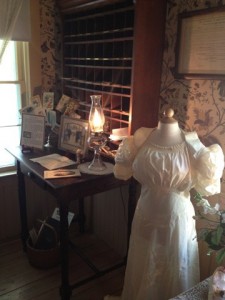 The dresses on exhibit throughout the Noble House reveal more than pretty garb women a century past donned on the day they said, “I do.” They speak of the time and place from which they came, whether Germany in 1860 or the United States in 1960; the women of influence at the time, from Queen Victoria to Jackie Kennedy; as well as the nation’s trends, from the flair of the Jazz Age to the simplicity of World War II. Entitled “Silken Memories,” the exhibit showcases not only a plethora of dresses but artifacts and displays that tell us something about the past.

“I learned so much putting this together,” says Gibraltar Historical Association (GHA) President Barbara McKesson, who sought out dresses and artifacts for the displays with the help of local residents, the Ephraim Foundation, and past president Eunice Rutherford. “I started researching and pulled out all kinds of interesting things about life in the late 18th century.”

For example, wedding dresses didn’t all come in white. “That started with Queen Victoria,” explains Doug Blahnik, GHA and Noble House Museum activity director. “She wore white,” adds McKesson, “all her children and nieces were married in white. Before that women wore their best dress and it could be a lot of different colors.” Therefore the exhibit features a black dress, a blue dress, and a brown dress.

To compliment the dresses and provide historical context, McKesson has many of the owners’ authentic wedding photographs and wedding certificates on display beside the gown.

McKesson has also set up many displays featuring courting and wedding traditions. “The whole idea of courting is just very, very different than it is today,” she explains. “A flower sent a message, a fan sent a message. Depending on how you held or fluttered [a fan] you’re telling the men in the room whatever you wanted to tell them, such as ‘I’m married,’ ‘I’m available,’ ‘You’re cruel.’ And if a gentleman picks up a woman’s glove that is almost a betrothal. That’s real close to saying ‘Marry me!’” 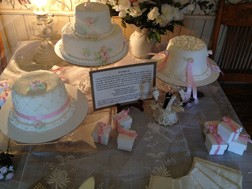 Once engaged, a table displaying gifts was set up in the bride’s home. “They would show off what they received,” explains McKesson. “Often times they were given gifts they probably would not use [such as fancy dishware, tea sets, or cutlery], but they would be cherished.”

McKesson also set up a display of the wedding cakes that might have been a part of the occasion. “There were three cakes usually at a wedding. One was the regular guest cake. One was a bride’s cake and you would eat that after twenty-five years or at the christening of your first child,” she explains. “Their cakes were like fruit cakes, they would store them in liquor. The other cake is the groom’s cake; it had ribbons baked into the cake with charms tied to the ribbons. So the bridesmaids would choose a ribbon and they would pull and if it was a horseshoe it was good luck, if it was a ring you were the next to marry, if you got a thimble you were going to be a spinster.”

The exhibit takes up the entire Noble House – the parlor, kitchen, dinning room, bedrooms, and sewing room. “We let people go right in the room, walk around, and open drawers,” says Blahnik. “You feel more a part of the tour than if you stand at the door and peek over a rope.”

The GHA will also offer a chance for the public to view the dresses on live models during their Tea & Wedding Dress Style Show on June 28 and 29 at 2:30 pm.

For more information or tickets to the Tea & Wedding Dress Style Show visit the History Center or call 920.868.9335.