Two people were transported to Ministry Door County Hospital July 3 for observation after the four-passenger plane they were flying in crashed while landing at the Washington Island airport. 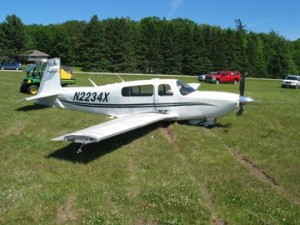 The Mooney Eagle came to a stop about 680 feet from its original landing runway.

The pilot, Daniel Folk, 58, of Urbana, Il., and his passenger, Katharine Riley of Natchitoches, La., were not seriously injured when the 1999 Mooney Eagle single engine plane they were flying came in for a hard landing heading Southeast at 2:14 pm.

The pilot told Washington Island Chief of Police Tyler McGrane that he was landing hard and bouncing off the runway when he tried to correct his path. The plane turned 90 degrees and crossed an adjacent runway before coming to a rest 680 feet off the original runway.

Though the crash ripped off the plane’s landing gear, there was no gas leak and no fire. McGrane said Folk is an experienced pilot who has flown into Washington Island Airport several times.

McGrane and a Federal Aviation Administration investigator met with the passengers Tuesday morning. McGrane said it was the first plane crash he’s seen in his 13 years as an officer on Washington Island.