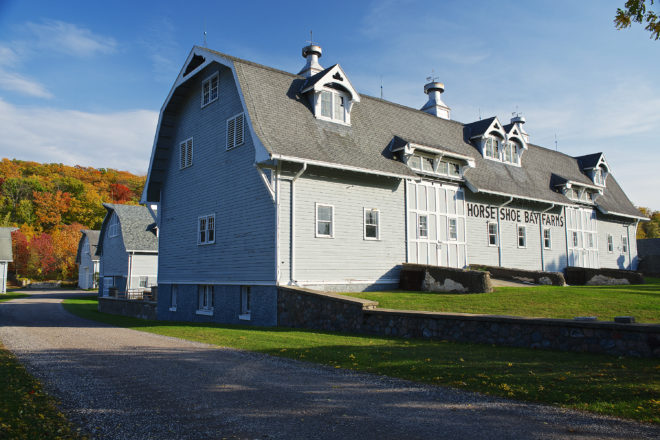 For more than a century the barns of Horseshoe Bay Farms have been an imposing presence on Bayshore Drive near Murphy Park. Thanks to the work of two generous families those barns will stand for decades to come.

Lori and David Nicholas have entered into an agreement to purchase the farm from Glenn and Barbara Timmerman and create a new nonprofit organization, Horseshoe Bay Farms, Inc., charged with preserving the farm and breathing new life into it as a community space and educational center.

“We always had an appreciation for the farm and what had gone on there,” Lori Nicholas said. “Two years ago we walked through the barns and property with Glenn Timmerman and learned so much more about the history and importance of the farm. We were enamored by the connectivity that the community has to it.”

In 1916 Frank Murphy built a state-of-the-art dairy farm that became one of the most innovative dairy farms in the world, famed for pioneering breeding concepts and industrializing farm practices. Later an expansive orchard was built, and the farm was for years the largest seasonal employer in Door County. For many young boys a stint at the farm’s Cherry Camp was a first summer job.

Nicholas said she was awed by the stories of the farm, and concerned about its future. The family purchased the farm for $500,000, with Timmerman providing a substantial discount off its appraised value. The Nicholas family is also committing $250,000 toward refurbishing the barns, which will cover the most urgent repairs needed on the century-old structures.

In 2007 Timmerman bought the property the night before it was to go to auction. Developers had floated plans to turn it into a retail and condominium complex, an image that made Timmerman shudder. He dove into researching the property and got it listed on the National Register of Historic Places, then spent years trying to figure out an economically feasible way to preserve the barn, and produced a master plan for the property in 2014.

“I would have hoped to have been a lot farther along with the project right now,” Timmerman said. “But this has worked out. We are ending up with a great family passionate about preservation, with a young son-in-law with the energy to work on this for years.”

He called the effort of the Nicholas family “extraordinary. They’re putting in $750,000 in cash, that’s a heck of a commitment.”

The first phase of the new era for the farm takes place Oct. 3, when two of the old workers’ cottages on the lake side of Bayshore Drive will be moved to the farm property.

One of those homes was once the farm manager’s quarters, a position held by Al Erickson for decades before it passed to his son Howard, whose daughter Liz Dickson grew up in the home. Dickson said she’s sad the buildings have to move, but is grateful they won’t be demolished.

“We are so appreciative for everything Glenn has done to preserve Horseshoe Bay,” Dickson said. “If it wasn’t for Glenn Timmerman we would see a whole bunch of condos down there.”

While waiting for the IRS to approve the 501c3 status of the new Horseshoe Bay Farms, Inc., the Egg Harbor Historical Society has stepped in to temporarily take ownership of the cottages so funds could be secured from the Raibrook Foundation to move the cottages.

Horseshoe Bay Farms was once the largest seasonal employer in Door County. Submitted.

“This is the way things like this should happen, bringing groups like this family, the community foundation, and the historical society together to get a solution like this,” Timmerman said.

Once nonprofit status is confirmed by the IRS, planning will begin in earnest. That work will be led by the Nicholas family, including son-in-law Andrew Gill. He and his wife Katie opened Heirloom Cafe in Baileys Harbor this summer after relocating from Austin, Texas, where Gill was the executive director of the Pease Park Conservancy, an 84-acre park near the University of Texas. Their focus is on making it a community project.

“Forming a 501c3 makes it possible to make this a community space and community asset,” Gill said.

Work will begin this winter on a new interpretive master plan created with community input. Though unsure what the final plan will look like, Gill said they’ve identified some aspects that will certainly be included.

“We’ve probably only just scratched the surface of the stories of this farm,” Gill said. “There will be a significant educational aspect about the farm, hopefully a community garden, and in my ideal world I would love to see that main barn restored and accessible to the public.”

He said they will want to find a way to generate revenue on the property to support staff and programming, and to maintain the building and grounds. It’s estimated another $350,000 is needed to completely refurbish the buildings and grounds for public access. Timmerman, Troutman, and James Vander Heiden are leading that effort with hopes of raising the funds by next summer.