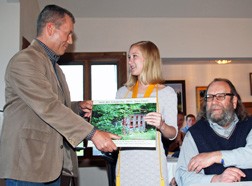 After writer Norbert Blei died on April 23, 2013, Blei’s friend and local musician Pete Thelen was determined to find a way to honor the writer’s impact on his friends, on other writers, and on Door County itself. Thelen gathered nine of Blei’s friends and proposed they each donate $100 to set-up the Norbert Blei Scholarship Fund, with the goal of presenting a $1,000 check to a graduating Gibraltar student who had an interest in pursuing the development of his or her writing skills.

“I was blown away by Nora’s essay. Put simply, it brought tears to my eyes,” said Thelen.

In a unique twist, Harris is the granddaughter of Sydney J. Harris (1917-1986), an American journalist for the Chicago Daily News and later the Chicago Sun-Times. “Syd” Harris’s weekday column, “Strictly Personal,” was syndicated in hundreds of newspapers throughout the United States and Canada. In 1982, Harris also wrote a dust jacket blurb for the first edition of Norbert Blei’s book Door Way: The People in the Landscape, his most well-known book about Door County.

In addition to his early career as a high school English teacher and then journalist in Chicago, Blei wrote 17 books of non-fiction, fiction, poetry and essays. He moved to Door County permanently in 1969 and for the next 44 years, wrote in a converted chicken coop near Europe Lake in Ellison Bay. In 1994, Blei established Cross+Roads Press, dedicated to the publication of first chapbooks by poets, short story writers, novelists and artists.

Throughout his career, Blei was a committed, empathetic teacher, working with hundreds of developing writers. In 1972, he developed The Clearing Folk School’s writing program, which is still operating today under the auspices of Blei’s former Clearing students.