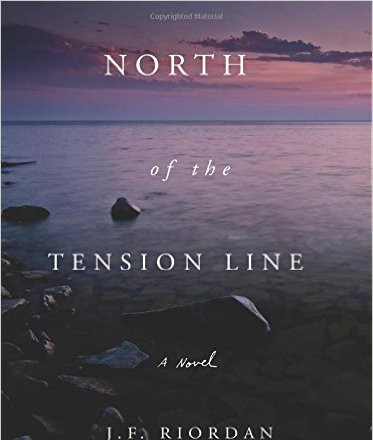 Nearly everyone who has taken the ferry to Washington Island has wondered what life might be like there, a fantasy filled with ambivalence because of the remoteness of that spread of land surrounded by water. While the location in some respects evokes a cozy romantic folksiness, a sense of protection far from the madding crowd, at the same time it calls up a vision of winter desolation and inconvenience regarding travel and necessities.

J.F. Riordan’s romance novel North of the Tension Line offers readers a vicarious year on the island. Big city girl Fiona Campbell, a former journalist and now freelance writer, had moved to Ephraim after living in Chicago and Milwaukee. On a dare, she not only took up residency on Washington Island, vowing to remain there for at least a year, but she impulsively bought an old house and accepted the dubious gift of a billy goat.

In keeping with the genre, Fiona has a best friend, Elisabeth Wright, who owns a gallery on the mainland and is also single. But as both women are attractive, well-dressed, and relatively young, romance is inevitable as eligible men appear in their lives, generating suspense for the reader as to who gets the girl and makes the ending happy.

This romance does what romances do, and does those things very well. Riordan is a good storyteller with a light touch. For example, her central character-writer decries the use of deus ex machina, but the author of the novel tongue-in-cheek implies her own guilt in this realm. The novelist uses language well in her very readable text, and even highbrows who reject the genre may well enjoy the gentle local color in her tale.

The author successfully evokes the ambiance both of the island and Northern Door villages, along with the adventure of ferry crossings. Those readers who know this end of the county will appreciate the atmosphere she summons up. And she creates a colorful cast of characters ranging from wildly eccentric Stella DesRoisiers on the island to neurotic Roger Mason who operates a coffee shop on the mainland. Again, those familiar with Northern Door will recognize types. And she captures cultural phenomena, town meetings, gallery openings, evenings at neighborhood bars and restaurants, events that ring true.

Quirky aspects of the novel are amusing, the zaniest of them all, the billy goat Robert that falls under Fiona’s care on the island. Robert’s goat behavior is a continual source of trouble for his mistress, his affection for her, doubtful, and his apparent ability to “talk” with a limited vocabulary, disconcerting. Any reader who thinks having a pet goat might be cute will have second thoughts after spending fictional time with Robert.

Although born in New Jersey, J.F. Riordan lived in Wisconsin as a child, and after years of travel returned to the Midwest, where she “lives in exile from Washington Island with her husband and two dogs.” Her affinity for the area is apparent in her entertaining tale.