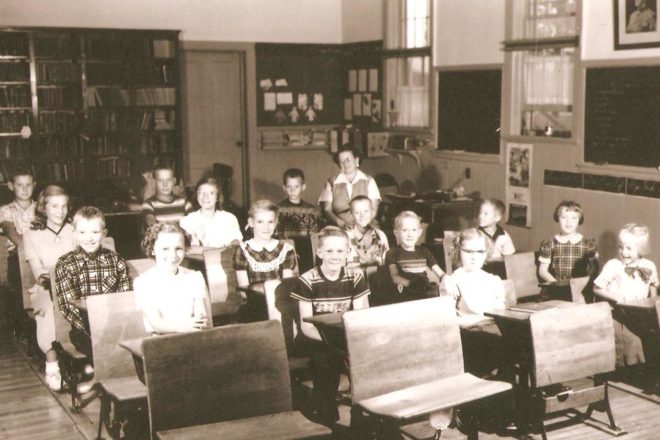 The earliest schools, for which no information remains, were on Washington Island in 1848, Ephraim and Chambers Island in 1854, Sturgeon Bay in 1856 and the Town of Gibraltar in 1857. In 1862, Milton Lyman became the first superintendent of schools in the county, with an annual salary of $350.

By 1862, there were 29 schools in the county. By 1913, the number had grown to 66. Twenty-six of these were in Northern Door, including four on Washington Island. A typical 1860s school was a log building, with rough boards for students to sit on and few windows, because glass was expensive and not always available. Semesters varied in length – usually a total of three months a year, the legal minimum, determined by planting and harvest seasons and weather conditions. Poor attendance was common. In 1901, it was determined that graded schools would replace the one-room schools. 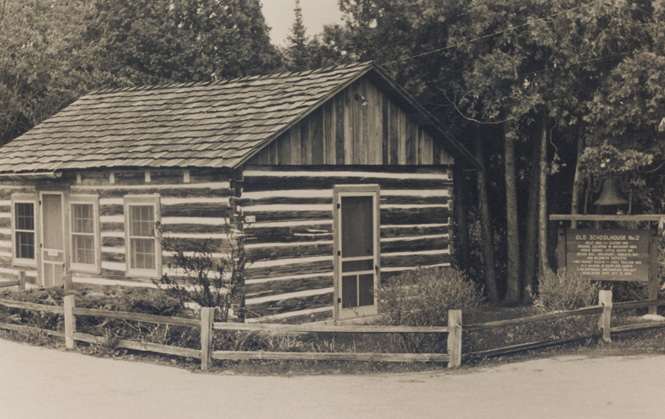 As immigrants began arriving, a school was needed. In 1865, Hans Gunnerson, a schoolmaster from Norway, became involved in the formation of the first school for the Town of Liberty Grove. He designed and built an 18’ x 24’ log building called District #2 that served students in Little Sister, Sister Bay, Appleport, Rowleys Bay and Wildwood. The exact location is unknown, although one source says it was located on “the only regulation road between Baileys Harbor and Sister Bay near the present Old Stage Road and County Z.” It closed in 1881 because it could not handle the increasing number of students. Appleport School later moved to Sister Bay on the water north of Sister Bay Motors.

Liberty School was also called German Settlement School and Liberty Grove School. The building from the first location became a cheese factory, then a gift shop, then a private home. The second is also now a private home.

Appleport School is referred to in a book by Charlene Appel Rice. The first log school was built in 1882, later replaced by a frame building. As classes grew, a second story was added. It closed in 1962-63, but continued to house kindergartners for two years.

Wildwood School was also known as Beyer School and Locust Grove, then back to Wildwood. It first faced Waters End Road at Old Stage Road. The second school was located north of there on Old Stage Road. It was torn down and now is the site of the Liberty Grove Town Building.

Rowleys Bay School, 1877-1925, began as a log structure, later framed. A former student reported that there was no fence around the school and that cows roamed around it and often peeked in the windows.

Ellison Bay School, now the Bergman home on the south side of Ruckert’s Store (now the Pioneer Store). The 1878 building on Hwy. 42 is now the Savory Spoon. The new school built in 1924 housed grades 1 through 10 until 1941. It was one of five new schools (including Newport) built in Door County in 1924. Jens Jenson planned the grounds. Lyla Small attended eight years here when there were four classes in each room.

Newport School first faced Timberline Road. There were separate doors for boys and girls. In 1904-05, the 75 students were taught by 19-year-old teacher John Brann, who already had two years’ experience. Classes were held at the Baptist Church while a new school facing Europe Bay Road was built in 1923-24. It’s now Uncle Tom’s Candy Store. Due to low enrollment, Newport and Ellison Bay schools were consolidated in 1957. 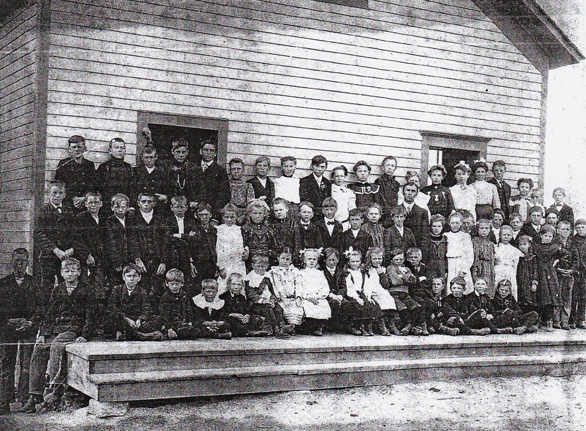 Sister Bay School, built in 1909, was a part of Liberty Grove until Sister Bay became a village in 1912. In 1963-64, the first kindergarten class in Gibraltar Area Schools began in Sister Bay. The last classes were held here in 1983. 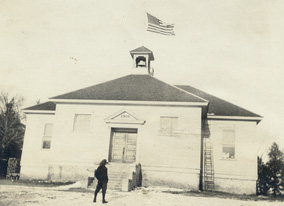 Marshall’s Point: A record was found indicating where land was sold or given for a school, but not where it was located.

Fish Creek School: There were two early schools in Fish Creek, one built in 1859 on land purchased from Asa and Eliza Thorp, and the second built in 1868 and used until 1925. The third building served from 1921 to 2006 and is now the post office.

Ephraim School had three locations, one called Cedar Grove near the Moravian Church. Pioneer School operated from 1878 to 1944, and the third school on Highway Q, is now the Municipal Building. In 1962, Liberty Grove and Ephraim merged. Ephraim had the last one-room school in Door County.

Blossomburg School, also known as Park School, was built on the Green Bay shore in what is now Peninsula State Park. It’s possible it was later moved near the Fish Creek entrance to the park. 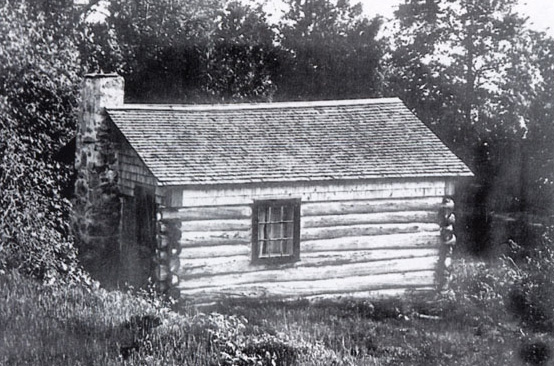 Maple Grove School, located on County Trunk F and Maple Grove, later became the VFW building and is now a private home. What was then Zion Fellowship (now Zion United Methodist) often met there for 30 years before their church was built on County F in 1905.

Juddville School was originally a log building. About 1910 it was moved to the Henry Olson farm and a new schoolhouse was built. It is now Juddville Clay Studio Gallery, with a picture of the old school created in tile on the north side of the building. 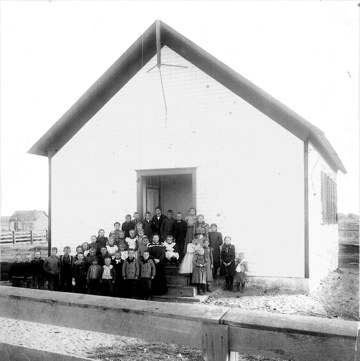 Chambers Island School is referred to in an old record. It became District #7 in 1862.

Pershing School, also known as Poland Junction School, was located on County Trunk EE near Little Marsh Road. Classes were held there until 1956.

Egg Harbor School was located near the water on the road to Alpine Resort. A new school was built farther inland, using the same stone as the Catholic Church. It was said to have the best architecture of any school in Door County. It was razed in 1977. 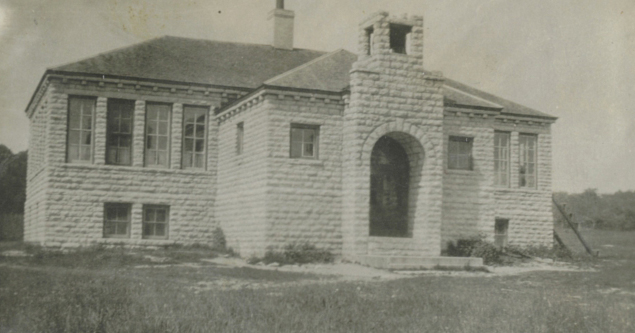 The Egg Harbor School, considered to have the finest architecture of old rural schools in Door County, in 1927. It was demolished in 1977. Courtesy of the Egg Harbor Historical Society.

Horseshoe Bay School was built in a small village called Cooperstown. It was sold in 1891.

Carlsville School: The first building was a log structure. Others were built in 1894 and 1919. The Egg Harbor District dissolved in 1961. The school closed in 1965, and students attended Sevastopol. 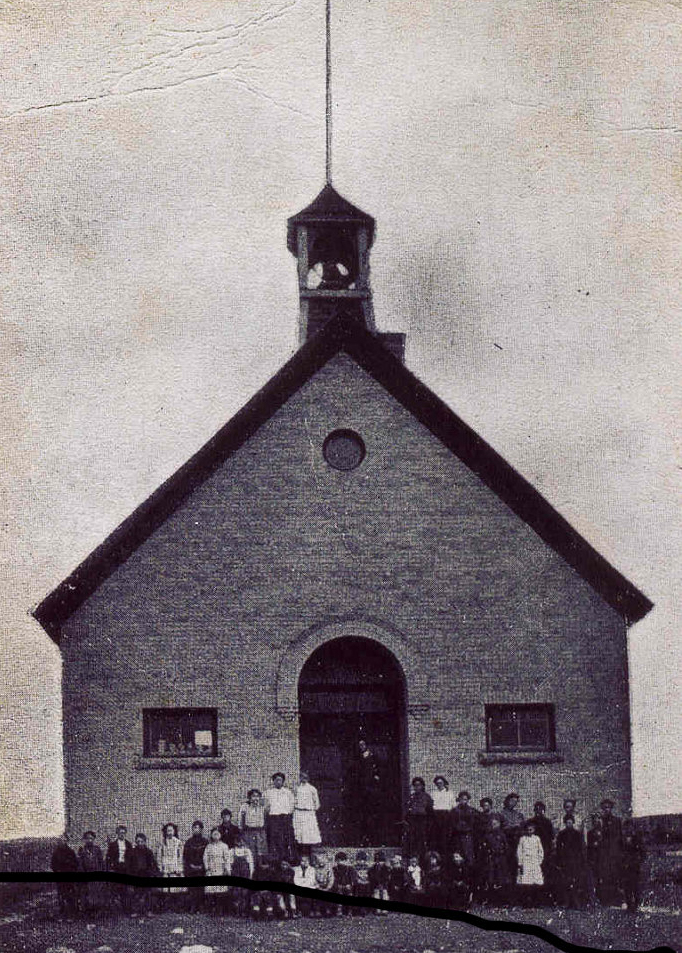 The original Carlsville School in the late 1800s. Courtesy of the Egg Harbor Historical Society.

Pleasant Grove School was located 2.5 miles east of Egg Harbor on School Road. After students transferred to Egg Harbor, the building was moved to a farm on Country Trunk E. Only the pump and part of the foundation remain at the original site. 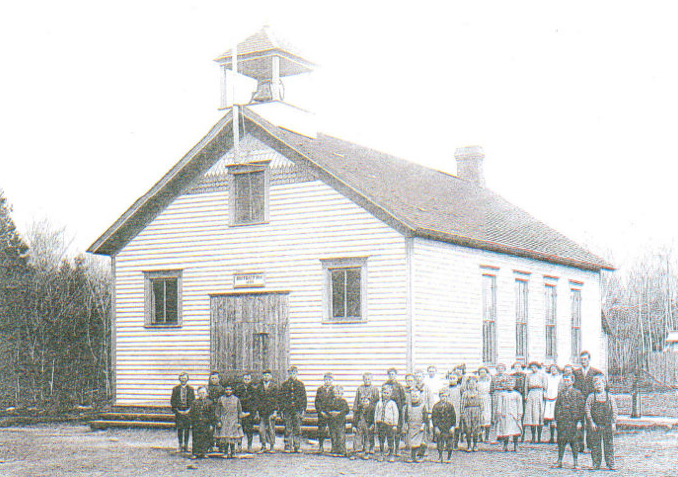 Baileys Harbor School was first a log building, located where the post office is today. The second school was located north of where the Catholic Church is now. It was destroyed by fire on Dec. 18, 1916. The new school built on Guy Street is now Orphan Annie’s Schoolhouse Inn.

Kangaroo Lake School: On Sept. 14, 1880, Ann T. Griffin sold one-half acre of her land on the northeast corner of County Road E and Logerquist Road to the board of School District #2 in Baileys Harbor for the purpose of building a school. The price was $15. The school was in operation until some time prior to Oct. 5, 1907, when the district sold the building to Hugh Collins for $35. In the early 1920s, the little building was moved to the Collins farm, later owned by the O’Brien family and later still by St. Joseph’s Retreat Center. That land was sold in the 2000s to Waseda Farms, and the schoolhouse is still there. The outside has been improved and the inside restored to the appearance of a 1800s rural school.

Peninsula Center School was located on County E near County A.

Woodland School, also known as the Swamp School, was located north of Baileys Harbor near the swamp. It is now a private home.

North Bay School, that served Baileys Harbor and North Bay, is mentioned in My Kind of County by John Fraser Hart. In 1952, Dick Davis, Hart’s brother-in-law, attended the auction to buy the old school and bid $382, all he had in his wallet. He lost to a higher bidder, but got the structure when the winning bidder proved to be insolvent. It was moved nine miles to Ephraim.

Eighth-Grade Exams: At the end of eighth grade, all the students in the rural schools had to go to Sturgeon Bay to take a final exam.

High Schools: Sturgeon Bay had the first high school, established in 1917. The first graduating class in 1920 had three members. The school began with 4.5 acres and purchased additional land three times for a total of 21-plus acres. Washington Island opened a private high school in 1919, and the Sevastopol Consolidated School offered grades 1-12, starting in 1924.

It was not until 1950 that Baileys Harbor, Liberty Grove and Egg Harbor students attended Gibraltar High School. By 1965, all the schools in the Gibraltar School District were consolidated, but several of the rural schools – Ellison Bay, Ephraim, Fish Creek, Appleport and Liberty Grove – were used for classes.