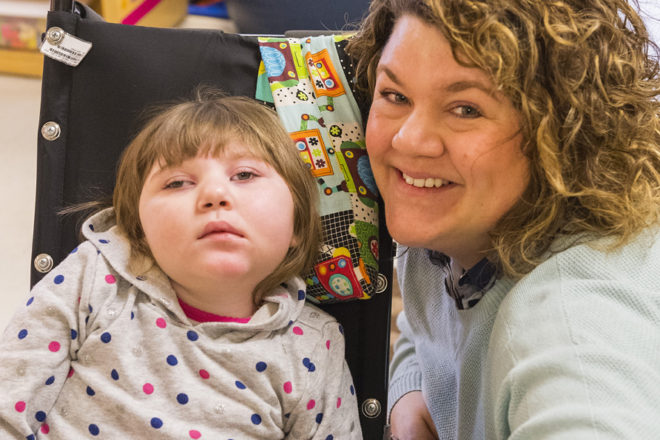 The Northern Door Children’s Center in Sister made it possible for Lauren Aurelius to return to full-time work after having her daughter Marjorie. Photo by Len Villano.

Returning to work after having a child is a daunting task for a parent. Lining up child care, fitting it into your financial constraints, and building in the time to get your kid to and from daycare or school can upend your life and your budget. Then you have to let go and trust the people you’re leaving your child with.

For Lauren Aurelius and Fred Wahlen, the task was particularly difficult. Their daughter Marjorie was born with infant hypoxic-ischemic encephalopathy, a type of brain damage caused when an infant’s brain doesn’t receive enough oxygen or blood in the womb. Marjorie’s condition was particularly severe, and doctors told the couple their daughter would live only days. Aurelius was devastated.

After giving birth by an emergency cesarean section, Aurelius would sit holding her child in what she called “a total state of disarray.” After nine days in the neonatal intensive care unit, she took Marjorie home to hospice care.

For days she expected the worst. But Marjorie fought. A week went by, then two. Then Marjorie was sucking on a pacifier and took to bottle feeding. “She really persevered, and then we’re like, I think she’s going to be around for a little while,” Aurelius said.

As relieved as she was, Aurelius now faced the challenge of caring for a child with incredibly complex medical needs.

After nine months at home caring for Marjorie she was ready to return to work, but wasn’t sure if she could find care for Marjorie, who can’t talk or walk. Friends suggested she visit the Northern Door Children’s Center in Sister Bay.

“I didn’t know what to expect, but I just remember them welcoming us with open arms and being really accepting of whatever medical conditions she had,” she said. “They took on the challenge. They never made me feel like Marjorie was too challenging. Once they said she could come, they took it all on.”

For Aurelius, it changed her life.

“It gave me a sense of freedom that I hadn’t felt since she was born,” she said. “Going back to work made me feel like I had a life outside taking care of her. That may sound bad, but it really helped me, I guess, heal from the trauma of having a child with special needs.”

“In order to do anything we would have to have a nurse or caregiver open to dealing with special needs kids,” Wahlen said. And if they found one, there’s no guarantee they could pay for it.

“My life would be much different, and so would Marjorie’s,” Aurelius said. “It has definitely had a tremendous impact on all of our lives.” 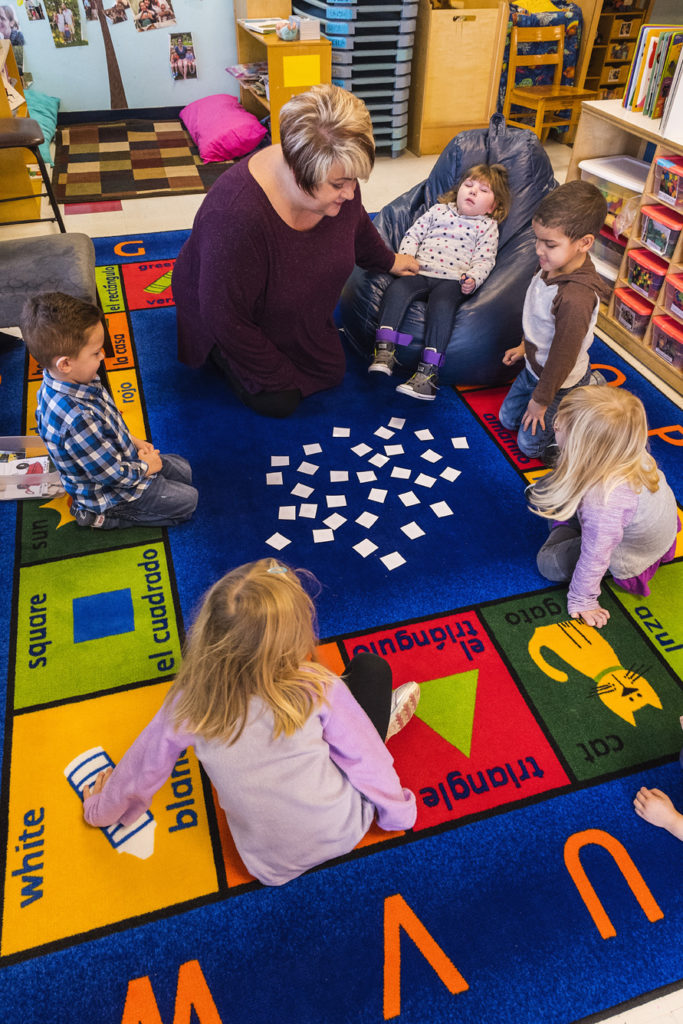 Marjorie Aurelius (in chair) takes part in lessons at the Northern Door Children’s Center. “I think it’s beneficial for them, and it’s certainly beneficial for Marjorie. You can tell she gets excited to go,” said her father Fred Wahlen. Photo by Len Villano.

Aurelius’s story is an extreme example of what Steve Grutzmacher had in mind when he spent seven years planning and fundraising for the children’s center facility. In 1991 Grutzmacher was invited to sit in on a conversation with a group that was working on plans to build a new home for the Northern Door Children’s Center. At the time it was operating out of the old Sister Bay School, an aging, deteriorating facility that would eventually be torn down. Grutzmacher got much more than a listen.

“It’s a great example of what you can get yourself into by being a nice guy,” he said. “I left that meeting, and by the next day I was chairman of the long-range planning committee.”

It proved fortuitous. Grutzmacher happened to know a woman named Judith Blazer, who was notoriously private, but also fantastically generous. Blazer was an heiress to the Miller Electric fortune, and had moved to Door County in the 1990s.

Door County is home to a remarkably generous donor base of philanthropists who give to all manner of causes, but raising funds for social services whose greatest benefit is seen across decades has traditionally been difficult.

“This was a project that was a self-evident need for our community,” Grutzmacher said. “Volunteers had kept this thing running on a shoestring for years.”

Though it was clear to Grutzmacher that quality early childhood education was crucial to the Northern Door community’s ability to attract and keep young families, it was a harder sell than he expected.

“A lot of people didn’t see it as a key need for the community,” he said.

When Grutzmacher broached the subject of the facility with Blazer, she told him to come to her when they had a plan. He did, and Blazer initially committed $1 million for the building, and later added $350,000 more. The center opened its doors in November of 1998, and in the years following Blazer’s total contributions would approach $2 million, according to Executive Director Cindy Trinker-Peot.

“She was our angel,” Trinker-Peot said. 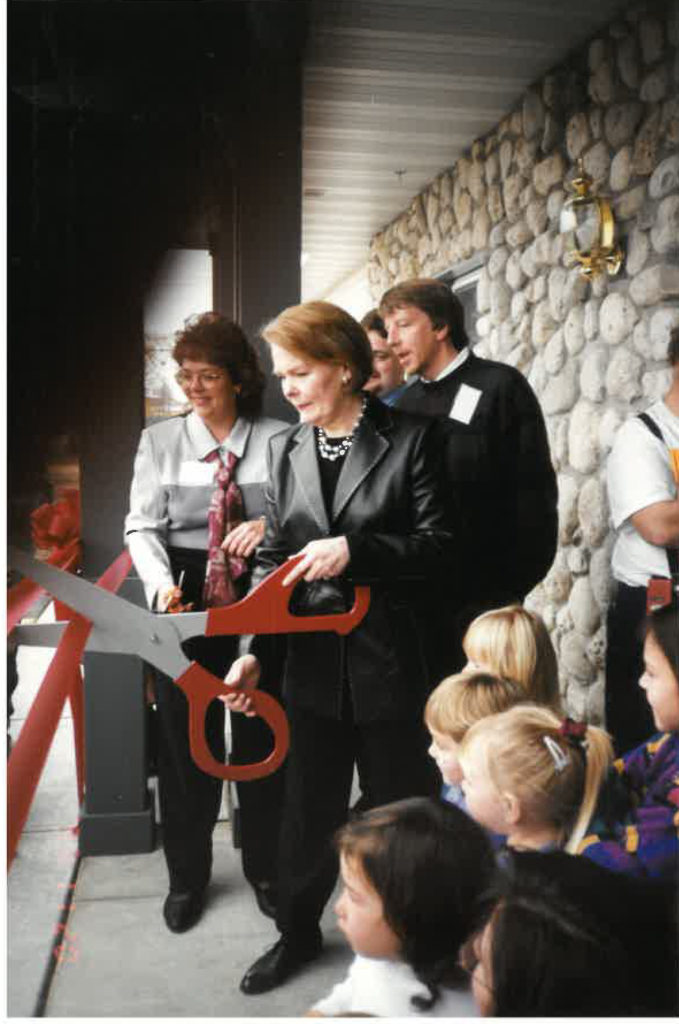 Steve Grutzmacher (back right) looks on as Judith Blazer cuts the ribbon at the grand opening of the Northern Door Children’s Center in 1998. Submitted.

In the course of a year the center serves roughly 130 children from infants to 4K, touching about 100 families. Parents take advantage of a contract schedule tailored to the seasonal nature of the community. Instead of a single year contract, the center offers five different contract periods to accommodate the fluctuating work schedules of the tourism industry.

Families pay $215 a week for an infant, or $195 for four-year-old kindergarten, rates kept low because the school raises funds for nearly a quarter of its budget every year.

“If we didn’t, there’s no way a lot of our families could afford it,” Trinker-Peot said.

Kathy Toerpe and her husband Tom decided to move from the suburbs of Chicago to Door County in 2000. Tom kept his job in Chicago, and Kathy opened a store in the Country Walk Shops in Sister Bay. With five kids between ages 2 and 11, one with special needs, child care was crucial to their decision.

“The center, in a sense, was what made the move possible,” Toerpe said. “There’s no way I could have done it without any child care.”

The Toerpes are a diverse family. Joel, their oldest child, is white. Their other four children are adopted — Claire is African-American and Palestinian, Evan is Chinese, and biological sisters Olivia and Grace are African-American and Cuban. Kathy said their early childhood years at the children’s center helped them adapt to life in a community lacking diversity.

“It really helped them, especially the younger ones, because the kids that they met, that they were literally in diapers with, when they moved over to Gibraltar it was really a very easy transition,” she said. “We probably doubled the population of people of color up here. Having those relationships with other families early on smoothed the transition for them.”

Aurelius has witnessed a similar impact on Marjorie.

“They really adapted to her needs and connected it with the developmental changes of her peers,” she said. “They make sure they include her, call on her to pick jobs even though she’s unable to do those things. They help her manipulate different toys and sensory objects while she’s watching other kids play.”

Marjorie has been going to the children’s center for nearly three years. Lauren chokes up as she talks about the changes she’s witnessed in her daughter and the way her peers interact with her.

“They would tell the kids, ‘Why don’t you show Marjorie this book that you’re reading or this toy you’re playing with,’” she said. “Now those kids are used to Marjorie, and will include her without prompting. I feel like this has just been so helpful for her peers as well. They’re used to her hearing aids, the sound of her machine. It’s great exposure for them, and great exposure for us. Just to be around kids and action and noise, she definitely responds to her environment.”

Raising Marjorie isn’t easy, even with the help, but Aurelius is able to work more than full-time between waitressing at the Wickman House and running a business with Wahlen, who stays with Marjorie at night when Aurelius works. She and Wahlen are able to have lives of their own, and they said they owe much of that to the children’s center. 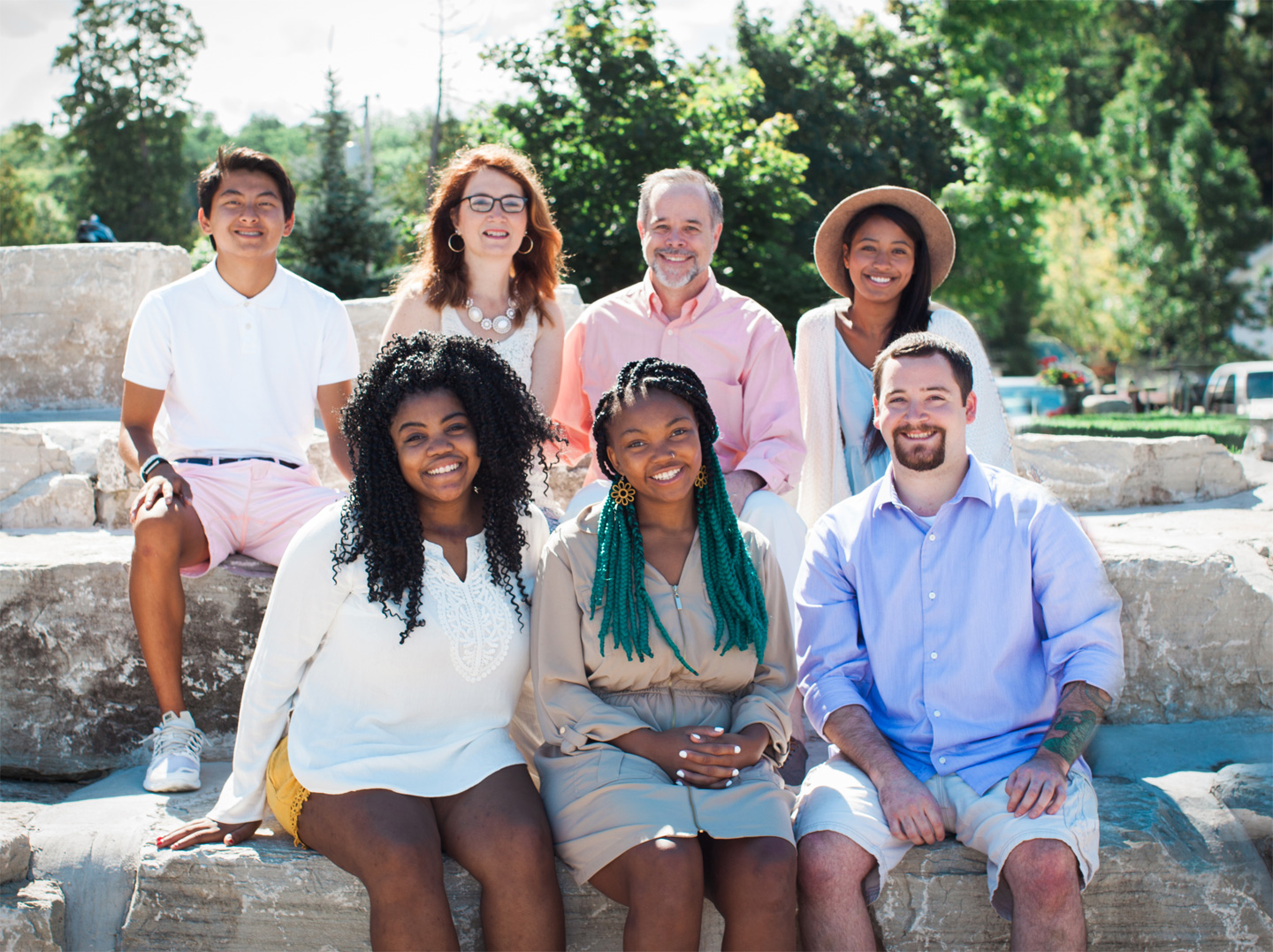 It has now been 19 years since the Northern Door Children’s Center opened the doors to its new facility, with countless fundraisers, programs, sessions, and summer camps now on its resume. Hundreds of kids have entered school better prepared through its early childhood education, but it has also impacted hundreds of parents who were able to carve out a career and a life in Door County with the center’s help.