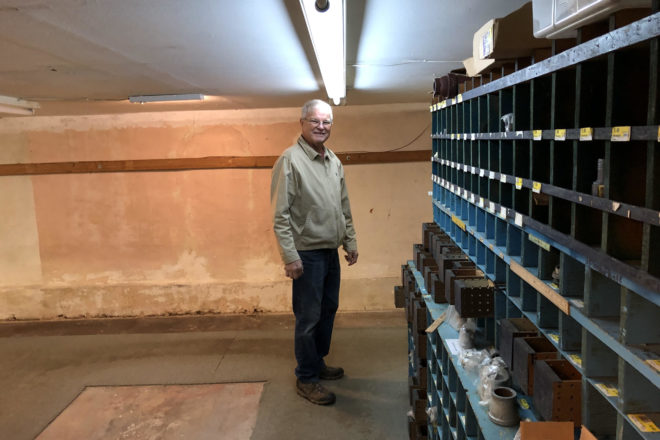 Gary Nelson’s head nearly touches the ceiling of the basement that his father, Gordon, dug by hand beneath the now-closed Nelson’s hardware store in Baileys Harbor. Voters in April approved of the town’s purchase of Nelson’s lakefront properties in October, with contingencies for asbestos and environmental-survey findings. Photo by Craig Sterrett.

Hardware stores have contributed to the American do-it-yourself spirit since the pioneer days. A tour with Gary Nelson inside the Nelson Shopping Center buildings that he’s selling to the Town of Baileys Harbor offered a glimpse into just how much his dad, Gordy, celebrated that DIY enthusiasm.

Additions and alterations made for business and family purposes completely envelop the the former Brann Brothers store building that Gordon Nelson acquired around 1950. He dug out the partial basement’s floor until he hit “solid rock,” creating a slope that former customers may recall. That the rear of the original building was taller than the front didn’t sway Gordon, who backed up a truck and went to work.

“He dug it out by hand, pickup truck and a shovel,” Gary said.

At one point, Gordon Nelson allowed the town to park its two old fire trucks, end to end, within the basement. Gary said the town tended to move the trucks from place to place, such as Gene’s gas station and liquor store, where the marina building sits now. But during the 1950s, two town board members noticed that the rear garage doors seemed high enough to squeeze in the fire trucks, including the 1936 vehicle that’s now at the Blue Ox.

Gary said that because his father agreed to allow the trucks in the building, he was named fire chief. Years later, when an inspector expressed shock to find fire trucks in the basement and no fire wall separating the store from the vehicles and their fuel, the town gave Chief Nelson a pay raise for two years to compensate for the costs of adding a fire wall to the ceiling and an interior basement wall.

The fire trucks were there until around 1965, when Gordon needed the space for the hardware store’s brisk business and told town leaders they needed to build a fire station, Gary recalled.

“Moving from here to a two-bay station was a big improvement,” Gary said. “The firefighters had keys. They weren’t coming into a private residence to get fire trucks.”

Shoppers probably did not think of the store as a residence, but Gary and his family members entered the business every day through a door connecting their kitchen to the store’s front room – which, during the 1990s and early 2000s, stocked T-shirts, beachwear, hats, boots, socks and camping and picnic gear.

“I worked in the building since the time I was able to walk, filling the pop machine, emptying the garbage cans, sweeping floors,” Gary said.

He was a sophomore studying economics at Bethel College in Minnesota when his dad let him know the county was getting strict about construction and the family should hurry to build additions to double the store’s size to remain competitive. Gary was in the middle of his junior year, but he willingly dropped out to help with the addition.

Gary recalled, “In talking with my dad, he said, ‘Are you sure you want to take over the business, because if you do, we have to build an addition on.’ He said if we’re going to do it, we’re going to do it now, so we built back all the way to the lake, leaving just enough room to drive around to the rear of the building. County zoning was coming. With zoning, you had to be 75 feet or something away from the lake. If we would have waited until spring, we could never have built the back on.”

“When the family grew up, we chopped off one of the bedrooms and made that a motel room, and then my folks lived in here,” Gary said, pointing east through the wall of the store’s narrow, makeshift break room. “We chopped it again and made my folks’ house smaller, and we rented another unit, and then when my folks died, their kitchen and living room became another unit.”

When the need arose in town, Gordon Nelson created the We Wash ’Em Laundromat under the house in what had been the children’s playroom.

In the basement room where customers picked out shovels and rakes during the 1990s, the Nelsons’ children and employees operated washing machines, a water extractor and three dryers during the 1950s.

Alongside the laundry business, Gordon created a vault by thickening closet walls and a ceiling with rocks and concrete, and then attaching the door from an old safe. The Town of Baileys Harbor may encounter that vault and other stony obstructions if leaders decide to demolish the hardware store building. The three-foot-thick footings of the original Brann Brothers store building surely stand above ground level in some spots.

Precious little memorabilia remains in the store building and the Nelson’s garage, equipment rental and shop building that housed the Boettcher Ford garage and Pat Husby’s snowmobile shop during the mid- to late 20th century. But Gary does have a few treasures. There’s a piece of a memorial bench that was broken at the marina; a large, not-for-sale Ford sign; a portrait of his father; and a sketch of a local businessman who did not like having his photo taken.

“My dad went to the bank to borrow money,” Gary recalled, “and the bank told him no. So he went to, I guess his nickname was ‘10 Percent John.’ [John] would loan money to businesspeople if he liked them, but he charged 10% interest. He became wealthy because people thought they could swindle him and not pay him back, but he played his cards right and he put liens on their houses, and when that property would come up for sale, he was right there. My dad paid him back, every nickel, and [John] gave him money when nobody else would.”

Nelson is holding on to just a few keepsakes at the garage building, such as a few beastly old chainsaws, some political signs, one antique power mower and a telephone booth for which a defunct Texas company still owed him money. The building still houses a massive, old boiler that heated the garage, although it’s missing a few parts that workmen bought or borrowed.

After closing the store and garage, Gary got rid of 76 mowers that he had taken in on trade and used for parts. He said every one of the mowers removed from the attic had a wheel, carburetor or other part missing.

It seems Gary Nelson inherited his father’s ingenuity and creative business sense along with the store.

The portable art would be preserved if the buildings are demolished

Art lovers, fear not. If the Town of Baileys Harbor decides to demolish the former Nelson’s hardware building, Ram Rojas’ massive mural on the structure’s north side will be preserved.

That’s because the mural is portable: It was painted on aluminum panels that were screwed into the building.

Although the mural is not Nelson’s property, he has reason to care about it. In addition to lake scenes, the light at The Ridges Sanctuary and Door County wildflowers, Rojas’ mural includes depictions of Nelson’s family: Adam (top right), Nelson’s son and assistant at the family’s Fish Creek store; and Gary’s parents, Gordon and Phyllis, at Gordy’s first business, a hamburger, fruit-and-vegetable and boat-rental stand at the Northport dock. The stand now resides on Liberty Grove Historical Society land north of Sister Bay.