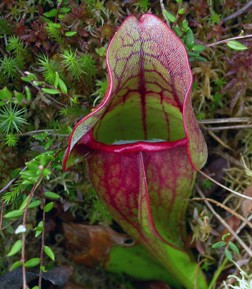 This autumn picture of a Pitcher Plant leaf, growing in Sphagnum moss, clearly shows zones 1, 2 and 3. Photo by Roy Lukes.

After decades of helping people learn about and appreciate birds, butterflies, wildflowers, trees and all aspects of the natural world through writing, classes and guided tours, perhaps the most fascinating and complex plant I’ve encountered among the wildflowers has been the Northern Pitcher Plant.

This species, found throughout most of Wisconsin, lives in low-nutrient sphagnum moss bogs and poor fen wetlands, greatly limiting the number of sites where they can be seen. The Ridges Sanctuary is by far the easiest place to enjoy them in Door County. One can see thousands of Northern Pitcher Plants in the great bogs of Newfoundland where it is their national flower.

It was Dr. Michel Sarrasin, early 18th Century physician at the Court of Quebec, who sent some northern species of this plant to Europe. The plant was named in his honor, Sarracenia purpurea (sar-a SEEN-e-a pur-PUR-e-a). Its species name of purpurea reflects the bright reddish-purple color of parts of its flowers and leaves. Northern Florida claims 10 different species of Pitcher Plants while the entire northern part of North America has only one. However, as all are carnivorous plants, they depend upon trapped insects for about 80 percent of their protein in order to obtain the required nitrogen and phosphorous to survive.

At our latitude, and being close to cold Lake Michigan, they reach the peak of bloom from late June into early July. What’s neat about the plant is that, even after the petals of the large nodding flower have fallen, its five rigid and colorful sepals remain on the top of the tall stalks until the snow flies. Most people seeing this amazing plant for the first time in later summer have no idea that it once sported five beautiful short-lived petals.

This is what a pitcher Plant looks like from early July until the start of winter. Photo by Roy Lukes.

Naturally it is the strangely shaped leaves that give this plant its common name. Their color can range from light green to rich deep red. My observations through the years have led me to believe that plants that grow in shade tend to produce greener leaves while those in full sun have the reddish leaves. One source I read claimed that the red coloring may serve as a “sun block” protecting the foliage from the ultra-violet rays of the sun.

Due to the very nutrient-poor and acidic nature of the rain-fed bogs in which Pitcher Plants grow well, they have evolved through eons an intricate strategy for catching insects, which in turn provide the plants with nitrogen. Interestingly these plants have about five times more leaf biomass than root biomass. It was recently discovered that bacteria serve as the primary agents for changing the nitrogen from the drowned insects’ and spiders’ bodies into a form which the Pitcher Plants can absorb. What’s truly amazing is that the few living fly and mosquito larvae, capable of surviving in the rain-deposited water within the small “pitchers” – virtual death pools – regulate the abundance and diversity of the bacteria. This small “water world” is truly a very complex ecosystem.

Of the approximately 17 species of tiny arthropods capable of living in the deadly, smelly, “nitrogenous soup,” perhaps the most well-known is the Bog Mosquito, Wyeomyia smithii. The larvae of this mosquito are the top predators of other small living creatures within the water, such as rotifers, protozoa and midges. The presence of these mosquito larvae determines the bacterial species diversity within the pitcher, helping to keep everything in balance.

Late each fall the Bog Mosquito females attach eggs on the inside of the young leaves before rain fills them with water. Now the species overwinters, frozen solid in a block of ice inside the pitcher-shaped leaf. The larvae pupate in May and are on the wing by June. Few people would believe that a tiny mosquito could play such an important role in the life cycle of the Northern Pitcher Plant.

Look closely at a Pitcher Plant leaf, or at the photo of a leaf with this story, and you will see the following:

1. A glistening, shiny, deep red lip containing insect-attracting substances is at the very top of the leaf. This has been described as the “Attractive Zone.” 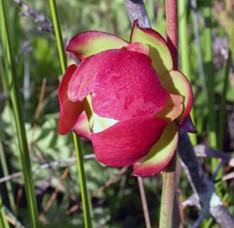 This is an early July picture of a pitcher plant flower with petals.

2. As you go downward on the leaf’s inner surface you see hundreds of very tiny spines all angled downward. A series of red, glandular-containing vein-like areas also line that surface. This is the “Conducting Zone.”

4. Finally, near the bottom of the leaf where it narrows considerably are long, glassy, smooth hairs and the digestive zone of the leaf. All four zones serve together in causing most of the insect-visitors to eventually fall into the water and drown.

I recommend that you try to obtain a copy of the excellent book, Reading the American Landscape – An Adventure in Ecology, by May Theilgaard Watts, who was the chief naturalist for many years at the famous Morton Arboretum in Lisle, Ill. Chapter 4 in her wonderful book, an all-time favorite of mine, is titled, “History Book With Flexible Cover – the Records in a Quaking Bog.” Mrs. Watts writes: “Were this a witches’ cauldron tale, instead of the story of an unpremeditating plant, how differently those four zones might be called: Zone 1 – Come into my pretty parlor, my dear. Zone 2 – Right this way, keep moving now, you! Zone 3 – Ha, my proud beauty, in you go! Zone 4 – Bubble, bubble, toil and trouble.”

Even though the intriguing Northern Pitcher Plant’s delicate balance of life and unusual plant-animal association continues unseen and unnoticed before our very eyes, it is only one of millions of Mother Nature’s fascinating stories surrounding us from day to day, if only we would slow down and stop, look, listen and learn.