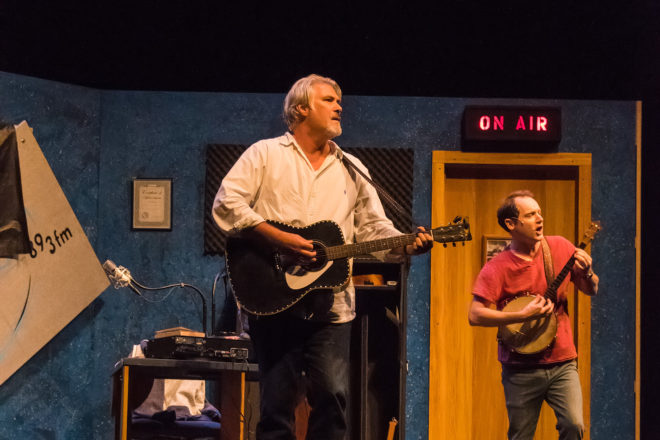 Before Doug Forrest takes his final bow as a cast member of Northern Sky Theater’s fall musical comedy, Naked Radio, and makes his way back home to Houston, Texas, he will take to a different Door County stage in favor of another musical project.

In early September, the same week he began his 45-show run with the theater, the Wisconsin native released his 13-track album, Be Optimistic. It’s a blend of Americana, alt-country, folk and blues that Forrest recorded at Robert Mokry’s YMD Recording in Austin, Texas.

Originally intended as a songwriter’s album – one that Forrest could send out to be recorded by other artists – Be Optimistic has turned out to be a semi-autobiography of the well traveled musician, actor and artist.

During the past three decades, Forrest has lived and performed throughout the United States, from New York to Los Angeles and everywhere in between. He began writing music 25 years ago, when he left his hometown of Wauwatosa in Milwaukee to explore greater metropolitan areas, like Chicago, New York and Nashville. Since then, he has written more than a hundred original songs, each of which serves as a touchstone for Forrest’s life memories. In Be Optimistic, he draws in songs that were written in nearly every place he’s called home. 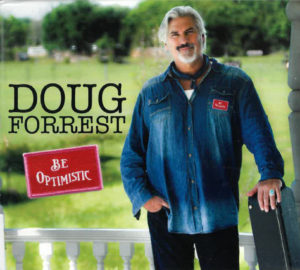 “I specifically wanted to take the listener on a little bit of a road trip with this,” Forrest said.

That road trip, spanning the past 30 years of Forrest’s life, begins with a twangy, string-filled tribute to the characters in his home state of Wisconsin – the diner owner, the farmer, the gas station worker – where “Heroes of the Heartland” is a designation for anyone who lends a helping hand and understands that “together, we’ll get through.”

His Nashville party days resurface in the accordion-fueled “Tequila Waltz” – “Margarita has left me and Old Pepe died. And though I shot José in days long gone by…that’s a lesson I’ve learned for the very last time!” – and he sings in questioning anticipation of seeing a former love from Austin who wants to grab a “Quick Cup-o-Coffee” before moving across the country. In the album’s closer, the most recently penned “Beautiful Year,” Forrest unplugs for an optimistic narrative on the people and places of his past, an appreciation of his present, and hope for his year to come.

While Forrest crafted an album with lyrics heavy on imagery and storytelling, each song stands out as its own musical journey. His lyrics play out to a background filled with the standards – guitar, percussion and piano – and not-so-standards – steel guitar, congas, dobro and glockenspiel.

With the help of producer Robert Mokry, Be Optimistic features a collection of musicians who have recorded with the likes of John Mellencamp, the BoDeans, Robert Earl Keen and Asleep at the Wheel, along with vocals by Kerrville Folk Festival New Folk Winner Rachel Laven.

Forrest will play selections of songs from Be Optimistic on Sunday evening, Oct. 15, at 7 pm at Lost Moth Gallery in Egg Harbor. Tickets are $20 cash and reservations are encouraged by calling 920.495.2928. For more information, visit dougforreststudio.com.