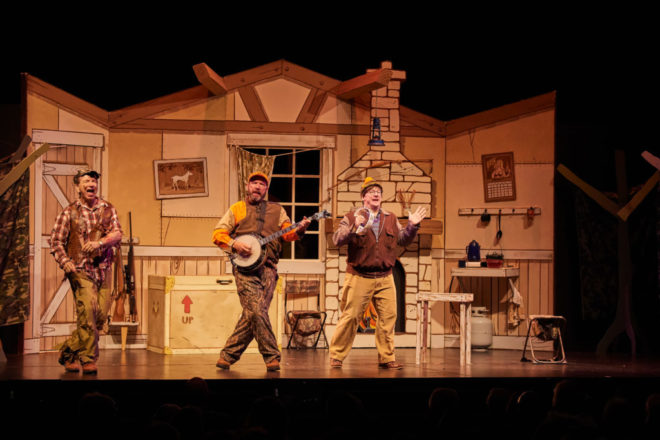 Guys & Does. Photo by Len Villano.

While things are gearing up for winter, Northern Sky Theater is already working on its 2023 season: three shows on its Peninsula State Park stage and three in its Gould Theater.

The first of the park shows is the world premiere of The Fish Whisperer by Scott Guy, Robin Share, Dan Wessels and Ron Barnett, developed in association with New Musicals. When the fish aren’t biting in small-town Shewauga, a stranger shows up promising a fix. Is it a hoax or a miracle?

This show is part of World Premiere Wisconsin, a statewide new-works festival taking place March 1 – June 30, 2023, and Northern Sky will be hosting the festival’s finale party in June.

Next up will be Paul Libman and Dave Hudson’s Cheeseheads! The Musical: a modern-day dairy tale with a lotto heart, and a touching and joyful Wisconsin musical Gouda luck fable.

Shows in the park wrap up in the fall with Lipstick Optional, a celebration of the women of Northern Sky in concert.

Performances at the Gould Theater in Fish Creek will begin with a 25th-anniversary celebration of Guys on Ice by Fred Alley and James Kaplan. Buddies Marvin and Lloyd spend a winter’s day in a shanty out on the ice, talking about life, love and Leinies.

Gould shows continue with Guys & Does: a whimsical, musical excursion into the world of Wisconsin deer hunting by Fred Heide, Lee Becker and Paul Libman.

The fall show at the Gould is Fred Heide and Lee Becker’s When Pigs Fly: a hilarious and heartwarming story about Bob and Dottie Dumkee, jam packed with humor and harmony.

Learn more about the 2023 season at northernskytheater.com.