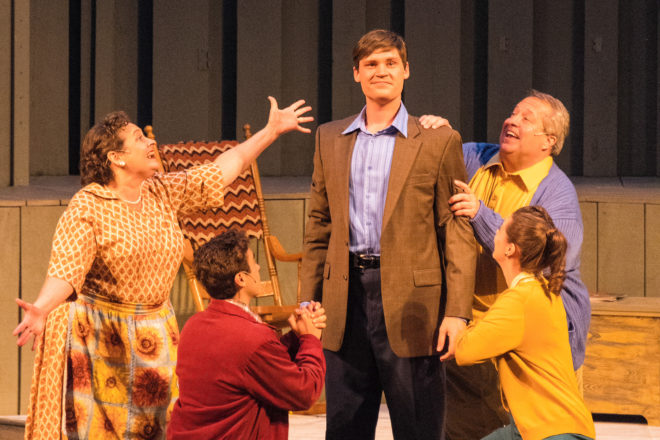 A touring company of Oklahoma!, Rodgers and Hammerstein’s first musical, may or may not have made it to a stage in Wisconsin seven decades ago. The movie by that name, released in 1955, did play here. Audiences definitely saw Oklahoma! in Wisconsin. And now there’s a third incarnation. Northern Sky is filling the theater in Peninsula Park three nights a week with people eager to see Oklahoma in Wisconsin.

No, it’s not the Broadway show from the 1940s, but a “what if,” “might have been” story about the shooting of the movie. Turns out there were too many oil derricks cluttering the landscape in 1950s Oklahoma to film a rustic tale set in 1906. So a nationwide search was on to find an appropriately bucolic setting. Eventually, the movie was made in Arizona.

But, what if the perfect location had been found in Door County? What if Hugh Fiedler, an ambitious, young man eager to promote his career at a major Hollywood studio, remembered idyllic childhood vacations at the Rocking Chair Inn in Fish Creek? And what if the inn, once the most popular in the area, had fallen on hard times, causing its owners, the Bradley family, to consider selling it to an obnoxious real estate man?

Because it’s set in Door County, the story involves good people – even if their best intentions stray from the path now and then. And, because it’s a Northern Sky musical, it will end well. So…

Even though Fiedler, the slick movie location scout played by Alex Campea, has fond memories of Door County, a lot of Hollywood’s ethics have rubbed off on him. Fiedler, tall and handsome, arrives at the Rocking Chair Inn with high hopes of putting his career in fast forward and, incidentally, saving the Bradleys’ business. Mom, Ginny Bradley, played by the ever-lovable Rhonda Rae Busch, is ga-ga for Howard Keel. Movie stars booking her inn for the summer? Time to spiff it up!

Bill Theisen is dad Archie Bradley, who is just fine with things the way they are. No new-fangled ideas for him, thank you. Just let him fish in peace. Charlotte Bradley, the smart, practical daughter, is played by the effervescent Eva Nimmer. John Brotherhood, is perfectly cast as Billy, Charlotte’s younger, wisecracking, rock-and-roll loving brother. (John is just out of high school, so the youthful enthusiasm is no act.)

Doug Mancheski plays two roles – Mr. Green, the pushy, cocky Door County realtor, and Mr. Goldnick, the cocky, demanding movie producer. A first glance at the playbill suggested that the characters sing a duet early in the show. No, not the case, but would that really have been beyond Mancheski’s ability? 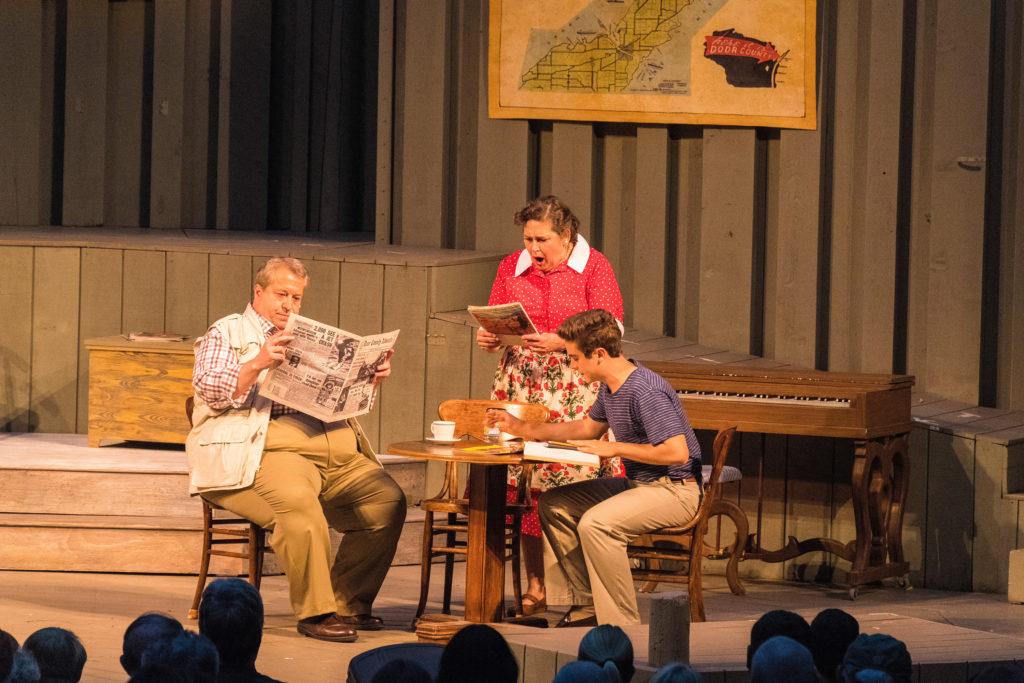 Bill Theisen, Rhonda Rae Busch and John Brotherhood star as Archie, Ginny and Billy Bradley in Oklahoma in Wisconsin. The charming musical imagines what could have happened if the Hollywood movie had been filmed in Door County. Photo by Len Villano.

The play could serve as a morality tale for the old adage, “Oh, what a tangled tale we weave when first we practice to deceive.” Fiedler’s first little lie leads to a lot of false assumptions. Finally, every cast member is hiding something. There’s a budding romance that is on and off and on, but you know – this being a humorous summer musical – there will be a happy, if unexpected twist at the end.

The 92-minute show includes 16 musical numbers. They’re all good, and you won’t soon forget Theisen’s gyrations in the clever “Doin’ a Doo-Wop.” Pit musicians Tim Lenihan, Jay Kummer and Colin O’Day provide a lively backup for the actors. You’ll be taken by surprise by a sudden cessation in the music – a delightful (no) sound gag.

There are dozens of throwaway lines that bring chuckles from audience members old enough to remember the mid-1900s, the glory days of big musicals. It’s easy to identify where those folks are sitting by where the laughter comes from. For example, not everyone got Ginny’s reference to “the new Liz Taylor-themed powder room with his, his, his and hers towels.” (Actually, the towel count was still four short – five if you allow two for Richard Burton, whom Liz married twice.) Another one-liner: Ginny’s purchase of ice cube trays that produce likenesses of Ike; but when they melt, look more like Senator McCarthy. Children enjoy the show, too. One on-stage quip brought a loud “That was funny!” from a tot in the front row.

Perhaps one of the biggest laughs came as the cast derided Archie’s dream of holding a fish boil and show in the backyard of the inn: “Who’s going to want to sit outside on a bench in the dark and watch people sing and dance?” And soon the entire audience was not only watching, but participating in a doo-woppin’ sing-along.

Oklahoma in Wisconsin was written by the California-based team of Richard Castle (book and lyrics) and Matthew Levine (music). Northern Sky’s artistic director Jeff Herbst found them through New Musicals Inc., an organization he’s worked with for a decade. The writing team visited Door County, stayed at and loved the White Gull Inn, and the rest is history. (The White Gull was not their inspiration for a failing inn!)

One last note: Even if the all-star cast of the movie had come to the Rocking Chair Inn, Ginny’s beloved Howard Keel would not have been among them. Although he had played the lead role of Curly in a London production of Oklahoma!, Gordon MacRae got the part in the movie version.

Oklahoma in Wisconsin is on the Northern Sky stage in Peninsula State Park at 6 pm Mondays, and 8 pm Wednesdays and Fridays through Aug. 25. For more information, call 920.854.6117.