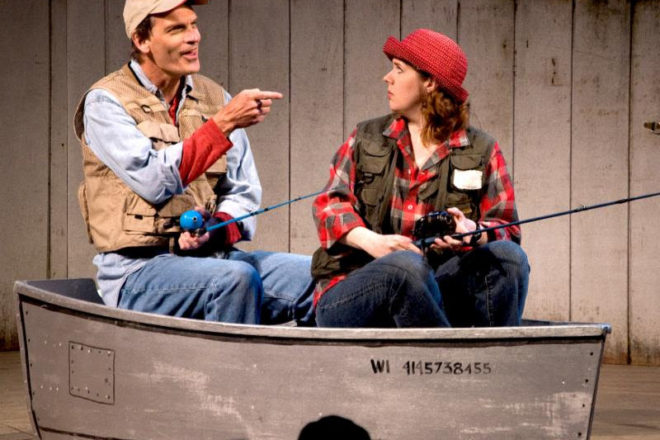 Jeff Herbst and Molly Rhode in the 2013 production of Muskie Love. Submitted.

Premiering in 2004, Muskie Love was the first collaboration by the now-veteran writing team of Dave Hudson and Paul Libman. Muskie Love is set on the shores of Green Bay and follows the exploits of Ben and Bea, rival fishing guides in Door County.

When Hudson started writing this show for Northern Sky, he read about Door County’s female fishing guide, Lynn Frederick. As he pondered the obstacles she might have faced, entering a mostly male-dominated profession, Hudson envisioned a strong, independent woman who might have a nemesis in the form of a male fishing guide. Hudson soon realized that Shakespeare had already written the plot with his comedy, Much Ado About Nothing in which characters Beatrice and Benedick are tricked into confessing their love for each other by means of secret messages, gossip and rumor. Hudson took that age-old plot and began adapting it into Muskie Love.

Muskie Love was last seen on the Northern Sky stage in 2013.

“Muskie Love is back and that means DNR Doug will be on the prowl,” said Artistic Director Jeff Herbst, regarding the show’s most memorable character. “With good-humored digs at our ‘Illinipution’ neighbors to the south, Muskie Love remains a Northern Sky fan favorite.”

Tickets for the fall season go on sale May 1 in the Northern Sky box office at the Green Gables shops in north Ephraim, by calling 920.854.6117 or visiting NorthernSkyTheater.com.