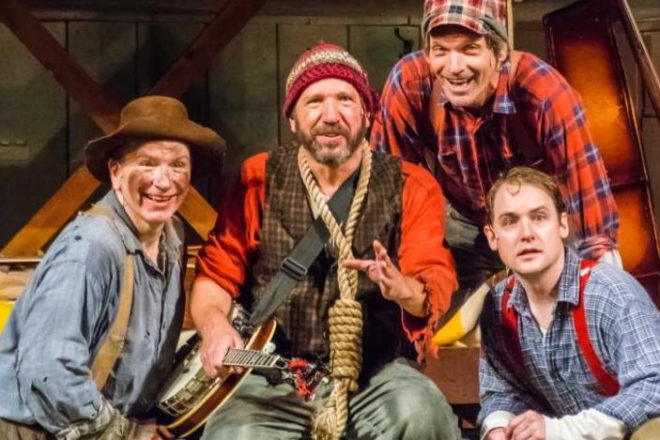 Northern Sky Theater has a new sponsorship opportunity for their 2018 summer season in Peninsula State Park. The sponsorship offers fans a chance to get up close and personal with the cast of Lumberjacks in Love.

“Lumberjacks in Love has been an audience favorite going back to the premiere in 1996,” said Artistic Director Jeff Herbst. “Four of my nephews, who are now all in their 20s, have seen it every year it’s been presented. The first thing they do when they see me each summer at our family reunion is sing ‘We Wish We All Were Shanty Boys’ and then they launch into the entire scene completely memorized. With that as inspiration, we’ve decided to make this year’s version a sing-a-long.”

The show, by Fred Alley and James Kaplan, will make a one-show-a-week appearance this summer, but this time around Northern Sky plans to hand out lyrics, encourage fans to dress as their favorite lumberjack or Jill, and feature a pre-show costume contest.

To celebrate this new take on an old favorite, the company is also offering sponsorships on a first come, per-performance basis.

Sponsorship of a Lumberjacks performance is $750. Sponsor perks include six reserved seats, a photo on stage with the cast and a backstage tour prior to the show. Sponsors will also hear their business or family name featured somewhere in the show. Individuals or businesses interested in sponsorship can call Northern Sky at 920.854.6117.