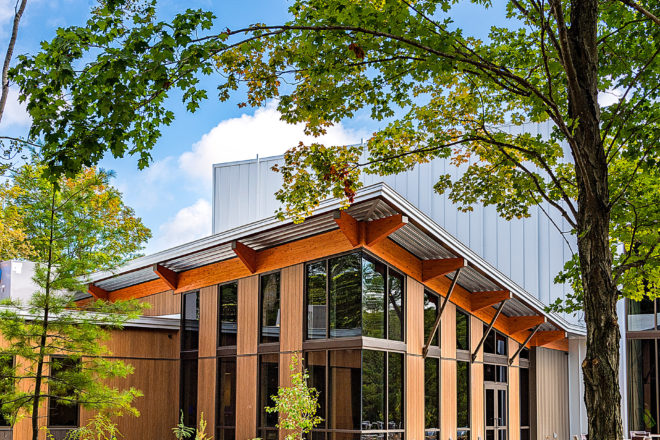 The Northern Sky Creative Campus was built to bring the natural world inside, with towering windows and wood accents that nod to its home in Peninsula State Park. Photo by Len Villano.

Northern Sky’s new creative campus at the corner of county roads A and F may have taken theater operations under one roof, but it’s not leaving the natural world behind.

The organization opened the doors to its new, $7.8 million home and the Barbara and Spencer Gould Theater Aug. 30 to a crowd of dedicated supporters and donors who helped turn the vision into reality.

The theater troupe got its start as the Heritage Ensemble in 1970, performing on the magical outdoor stage among the trees of Peninsula State Park. It earned a national reputation under the name of American Folklore Theatre in the 1990s, expanding on its summer encampment to perform on temporary fall stages – and will continue its grand tradition of producing summer shows in the park.

Entering its new home, one can’t help but feel the organization’s roots are still intact. Nestled into the evergreens across from the Greenwood Supper Club, the natural elements of Door County frame the new off-season home as they do the summer stage. Architect Peter Tan went to great lengths to shift that feeling inside by incorporating towering windows in the theater and lobby that frame the trees and stars. Carlson-Erickson Builders of Sister Bay served as general contractors for the project.

Board Chair Mary Seeberg held back tears as she thanked the supporters who had made it all happen. She recognized Fred Alley, the co-founder of American Folklore Theatre and the face of the organization who died of a heart attack at age 38 in 2001.

“I wish he could see this,” she said.

Artistic Director Jeff Herbst called it a special day and recalled his early years as a struggling creative searching for a place to play.

To learn more about the making of the new theater and what it means for Northern Sky Theater, read Celeste Benzschawel’s feature on the project, “Under Two Skies,” in the autumn issue of Door County Living magazine.