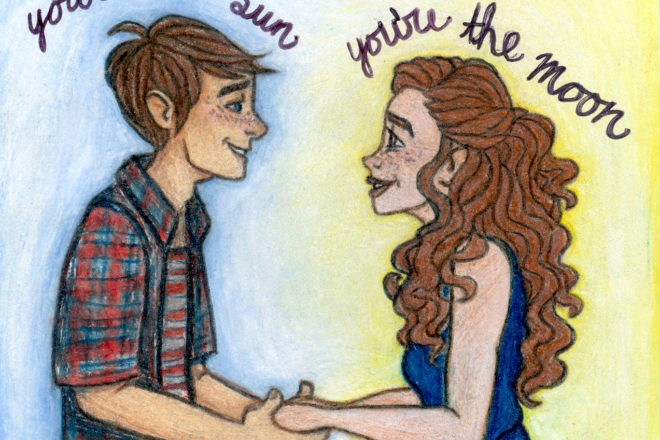 Maggie Godfrey’s sketch of Ronnie and Julie in No Bones About It. Submitted.

In the fall of 2007, an actress in Main-Travelled Roads, an American Folklore Theatre (AFT) show at the Ephraim Village Hall, received a “fan drawing” of herself from an eight-year-old girl who attended the play with her grandparents. The drawing was remarkable in its detail, even showing the ripped pocket on an apron.

Eight years later, another actor from Main-Travelled Roads, now married to the recipient of the 2007 drawing, received from a young teenager a drawing of himself in scenes from No Bones About It, a show presented in Peninsula State Park by Northern Sky Theater, the newly-renamed AFT.

A year or so ago, these actors, Molly Rhode and Chase Stoeger, began thinking about following the current craze for adult coloring books by creating a coloring book dedicated to the nearly 30-year history of AFT/Northern Sky shows. Of course, just as the shows have always been family friendly, the coloring book they envisioned would also be equally appealing to children and adults and a keepsake, once all the pages are colored.

And who better to collaborate on the book than the little girl/teenager who sent those long-ago fan drawings – Maggie Godfrey, now a high school graduate preparing for her freshman year as a visual arts major at University of Wisconsin-Madison. Stoeger contacted Godfrey as she was packing to leave for college last fall, and she began drawing the first pages during Christmas break in December.

Working with a digital tablet, Adobe Illustrator and Photoshop, Godfrey finished the last of the 11 drawings about the time her freshman year ended. The most detailed page, showing a scene from When Butter Churns to Gold, took about a week to complete.

Although that first sketch from 2007 has been lost, Godfrey remembers it well. “I drew it the morning after the show on a placemat at the White Gull, as I was waiting for my pancakes,” she said. “The picture from No Bones About It was drawn in the car on the five-hour drive home to Highland, Wis.”

Those drawings were done from memory, but the pictures in the coloring book of 11 of the theater company’s best-loved shows were created from photos of scenes chosen as most likely to stir memories for audiences through the years. They range from Belgians in Heaven (1994) to When Butter Churns to Gold (2015), a representation of the more than 50 original shows AFT/Northern Sky has presented since 1990.

The 50-page book also includes a synopsis of each of the shows pictured, the original cast lists, a two-page spread of the path theatergoers travel through the woods to reach the theater under the stars and an introductory poem by Rhode. Some of the pages are laid out so two people can color at the same time.

The full-color cover depicts a sunset over the stage and the title, Color the Northern Sky. The back pages include the logos of 18 other shows that can also be colored. Stoeger shepherded the book through the production process, while Rhode, now associate artistic director of Northern Sky, as well as an actor and director, has provided “an outside eye” and assisted with the book’s production. It will be available at the theater and the Northern Sky office in the Green Gables Shops in Ephraim.

“I’m very excited. It’s a book I’d like to have had when I was little,” said Godfrey, who is proud to have attended AFT shows “before I was born” and every year since. (Her grandparents are Tim, a longtime Northern Sky board member, and Sue Stone.) Godfrey is a first-year production intern with Northern Sky this summer.