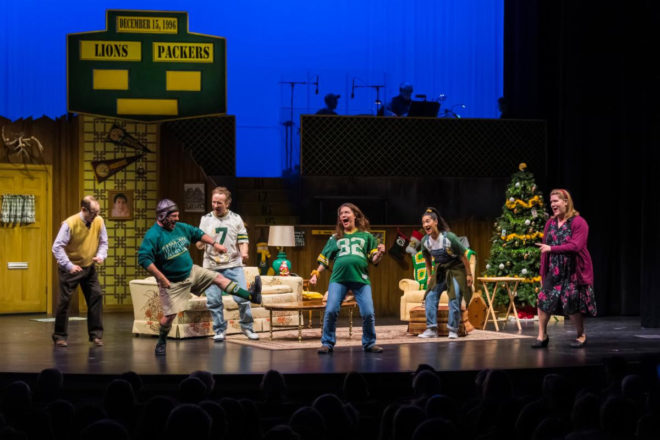 “Dad’s Season Tickets” was a big hit for Northern Sky Theater in 2019. Submitted.

Northern Sky Theater will expand its season this year to include 10 shows: seven in the summer, two in the fall and one during the winter holidays. During the summer, June 10 – Aug. 29, three shows will be performed at its outdoor venue in Peninsula State Park:

Love Stings is a world-premiere musical comedy by Richard Castle and Matthew Levine whose plot is adapted from a P.G. Wodehouse story about idealistic Bill Zapper. While planning a lavish wedding on a 1960s Door County bee farm, Zapper begins to wonder whether he and his reluctant fiancée are truly right for each other.

Fishing for the Moon, which premiered in 1992, was the first collaboration between Fred Alley and James Kaplan, who went on to write some of Northern Sky’s most beloved shows. The slightly madcap show takes place right after the Civil War and includes delightfully drawn characters and some absurd misunderstandings.

Belgians in Heaven – with book and lyrics by Doc Heide and Lee Becker, and music by Heide and Kaplan – is a metaphysical polka musical that follows the antics of a hilarious cast of characters: battling farming brothers Leo and Roger; Mildred, a talking chicken; a bumbling angel named Angelique; Henry, a savant; booyah-making neighbor Josephine; and plenty of alter personalities.

Also during the summer, June 16 to Sept. 5, four shows will be performed at Northern Sky’s new indoor Gould Theater:

Dad’s Season Tickets, by Matt Zembrowski, premiered as the troupe’s first production in the Gould Theater last fall. This homage to all things Packers and what that means for a Green Bay family was Northern Sky’s biggest hit in its 28-year history of doing fall shows.

Song of the Inland Seas, created by Dave Peterson, was the first show presented in Peninsula State Park in 1970. This 50th-anniversary presentation, celebrating the songs and stories of the Great Lakes, will have a limited run of six performances.

The Mountains Call My Name, by Doc Heide, also dates back to the theater company’s Heritage Ensemble days and was first presented in 1989. It features the engaging tales of John Muir, the Wisconsin-raised conservationist who was responsible for our national-park system.

SkyWriting! – assembled by Ray Jivoff, with music by Brett Ryback – is a new collaboration between Northern Sky and Write On, Door County that will feature the writing of local students presented by professional actors.

Northern Sky will also present two shows in repertory during its fall season, Sept. 11 – Oct. 31, in the Gould Theater:

Naked Radio, by Paul Libman and Dave Hudson, is back by popular demand after making its debut in 2017 featuring three actors playing 15 characters.

And If Elected – created by Dave Peterson, Jeff Herbst and Fred Alley – is Northern Sky’s quadrennial romp through past presidential campaigns. The show uses authentic songs and humor to poke fun at and reflect on the very real blood sport of American politicking.

In addition, look forward to the annual Home for the Holidays performances between Christmas and New Year’s. First offered in 2007, the show will continue to feature performers with ties to Northern Sky who will return for a week of signature concerts.

Tickets will go on sale March 2 at the Northern Sky box office at the Gould Theater, by phone at 920.854.6117 and online at NorthernSkyTheater.com.