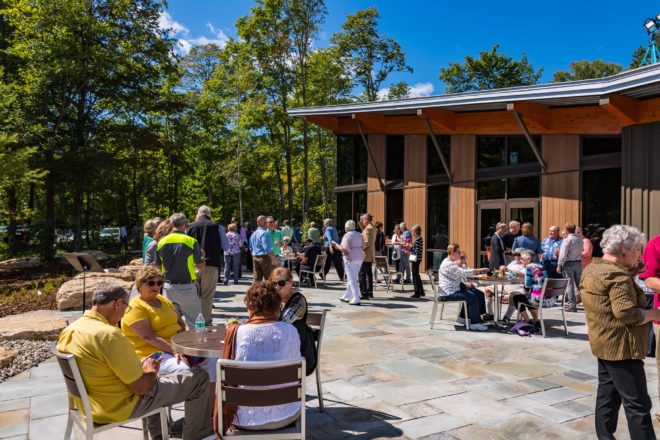 Part of the inspiration behind moving the fundraiser to Northern Sky’s Gould Theater was the grand-opening patio event for the theater company’s new indoor venue in 2019.

There’s a palpable excitement around the peninsula at this time of year as storefronts put the finishing touches on their displays, restaurants fire up the kitchen and theaters welcome company members back to the stage. Northern Sky Theater in Fish Creek is no exception.

As in year’s past, Northern Sky will launch the new season with its annual fundraiser, Raise the Curtain. But – plot twist – this year’s event, set for Saturday, May 28, has moved to the theater company’s Gould Theater in the form of a Bonfire Bash, complete with good music, good food and plenty of fun.

“We were already looking at the possibility of making the move to the Gould Theater for 2020 before the pandemic put everything on hold,” said Holly Feldman, Northern Sky’s associate managing director.
She said the theater company had already started looking for an alternate location when the Alpine – where the event was previously held – went up for sale in 2018 and had tentatively kept its new home on the list of possibilities.

“[We] thought we might be able to use our building and grounds here to host an indoor/outdoor event,” she said.

This year, instead of a sit-down dinner, Alexander’s will be catering on the theater building’s patio, allowing attendees to move among the lobby, patio and outdoor gathering space around the fire ring, and blues band Water Street Hotshots will provide the evening’s entertainment.
A virtual ticket option will also be available.

“This was one of those pandemic silver linings for us,” Feldman said, referring to the virtual format the event switched to during the coronavirus pandemic. “In the past, you had to be in Door County over Memorial Day Weekend in order to take part in the event. The pandemic allowed us to reach folks all across the country. In deciding whether or not to keep a virtual aspect of the event, it was a no-brainer.”

Though the venue is changing, the 2022 kickoff event will continue to include perennial favorites from past events, including Northern Sky Fashion Spy with Doug Clemons and Lachrisa Grandberry, and the online and in-person Marketplace.

“A major piece of our fundraising efforts for Raise the Curtain has always centered around an in-person silent auction,” Feldman said.

“In 2020, when we had to pivot to an all-online event, we put our artists front and center and split the proceeds with them, as many of them had yet to find work. Because patrons from all across the country could access our Marketplace, it was our most successful event to date.”

The Northern Sky Marketplace features show-themed baskets for auction, as well as distinctive items and experiences from Northern Sky artists, who share in the proceeds from what they create. In 2020, the year when the Marketplace went virtual, the theater raised nearly $35,000 from the Marketplace, which was split with the artists, and the event raised more than $80,000 for Northern Sky. This year, bidding and purchasing for the Marketplace will be completely online again, but the items will be on display in the lobby as well.
Also back – and available with one of the virtual-participation options – is the Northern Sky Box, created by Door County Delivered, run by Nic and Christiana Trapani. The box includes Door County consumables and Northern Sky keepsakes, including an etched charcuterie board, Fat Louie’s olive oil, Seaquist chopped-cherry jam, Country Ovens dried cherries and a cast-recording CD of The Fisherman’s Daughters.

Only a few in-person tickets remain, but virtual tickets are available until the day of the event. Virtual tickets with a Door County Delivered box are also still available, but the box will arrive after May 28. Learn more about Raise the Curtain and how to participate at northernskytheater.com/bonfirebash.