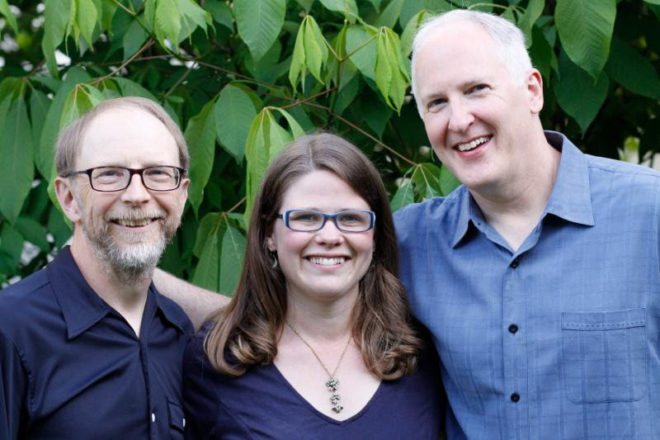 Door County’s award-winning Northern Sky Theater has announced the line-up for its annual holiday concert at the Old Gibraltar Town Hall. Now in its 11th year, “Home for the Holidays” will feature three talented performers Eric Lewis, Katie Dahl and Rich Higdon. The all-new concert for 2017 will play for six performances between Dec. 27 & 31.

“Home for the Holidays” will be an uplifting evening of intimate seasonal songs, dazzling instrumental fireworks, and delightful holiday humor. These three musicians, each well known in Door County in their own right, also appear frequently together as a trio, most recently releasing Solid Ground, an album of songs written by Northern Sky co-founder Fred Alley.

One of Door County’s favorite musicians, Lewis is thrilled to be back on the stage with his Northern Sky family for the holiday season. He has opened for Travis Tritt and Chuck Berry, and performed coast to coast with Jason Petty, Robin and Linda Williams and many others. Last fall he released his newest CD, Before the Last Time.

Singer-songwriter Dahl has performed her original songs everywhere from the dusty cliffs of Mali, to the winding canals of southern France, to the cedar forests of Door County. Since first appearing on Northern Sky’s stage wearing a spider hat in Sunsets and S’mores, Dahl has earned accolades nationwide for the depth and power of her alto voice, the literate candor of her songs, and the easy humor of her live performances. She is also a playwright who co-wrote the Northern Sky show Victory Farm. She is currently working on another show.

Higdon is a multi-instrumentalist who has shared the stage with his wife, Katie Dahl, all across the country, playing string bass, washboard, spoons, jug, and ukulele. As an actor, Rich worked extensively with Paul Sills, pioneer of story theatre. Rich is also a founding member of The Water Street Hot Shots, who were finalists in the 2010 International Blues Challenge in Memphis.

Performances are scheduled for 4 pm, Dec. 27 through Dec. 31, and also at 7 pm on Dec. 30. Tickets are $24 for adults and $14 for students age 17 and younger. Each show will also feature a drawing for gift certificates from local businesses.

Tickets can be purchased online at NorthernSkyTheater.com, at the Northern Sky box office at the Green Gables shops in north Ephraim or by calling 920.854.6117.