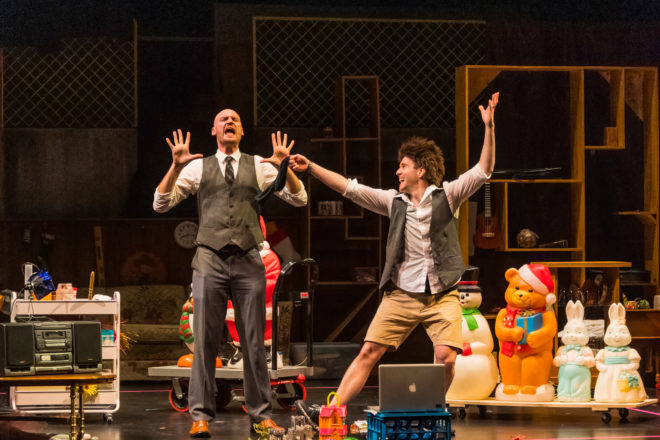 (From left) Alex Campea and Doug Clemons are surrounded by props you might find in any Wisconsin basement. Photo by Len Villano.

When I first saw Not Even Remotely back in June, I was seated on my couch in front of my computer. The show, which was performed live via YouTube, was a distinctly remote production.

The play is about a lavish musical production of Frankenstein that’s cut short, presumably (though never stated) by COVID-19, so it must be performed over the internet from the living room of a Milwaukee condo. Many of the jokes hinge on the audience viewing this production online because the director constantly cuts in to describe what the production would look like if it were being performed on an actual stage.

Now, Not Even Remotely is being performed indoors at Northern Sky’s Gould Theater in Fish Creek, and the question at the top of my mind was how the show’s premise would translate to an in-person performance.

The answer? It transitioned incredibly well.

Minor script updates were made at the top of the show to more clearly explain the premise to the audience, but those were not the only updates. Prop-focused sequences that were once confined to the small screen are now blown up by several orders of magnitude, and they are all the more entertaining for it.

My favorite moment involves several “characters” in a pub deciding what to do about Frankenstein’s monster. Doug Clemons plays the director, and the director plays every other character besides Alex Campea’s Victor Frankenstein. In the YouTube production, Clemons does this with finger puppets, but in the live show, he uses large, light-up Christmas decorations to play each character. This show is very good at introducing a simple idea, then exploring it to its fullest comedic potential.

Any questions I had regarding the show’s ability to transition from a small screen to a full stage melted away a short while into the production as the actors used their new, larger play space to full effect, with performances that my laptop screen would no longer be able to contain.

Learn more and purchase tickets at northernsky.com. But hurry! The show’s final live production will be Saturday, Aug. 7.