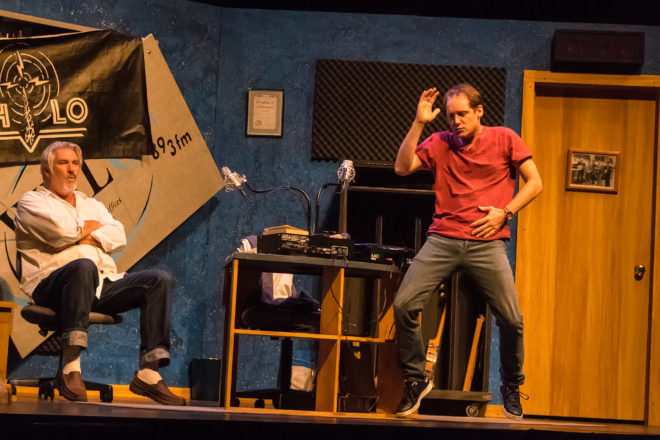 Trapped inside the radio station, the disc jockeys played by Doug Forrest (left) and Chase Stoeger in ‘Naked Radio’ contract a mild case of cabin fever. Photo by Len Villano.

Imagine you were one of two employees at a radio station in a little town somewhere when a snowstorm kicks off the corporate radio feed. There aren’t any records or tapes; the bosses canned those a long time ago in favor of a pre-programmed national broadcast. There is, however, a box of instruments, and you can feel your ad clients practically breathing down your neck about lost airtime. As you could imagine, things might get a little unhinged in such a situation. The show must go on.

If you did imagine this, then you imagined the pitch for Northern Sky Theater’s newest production, Naked Radio, premiering Sept. 1 indoors at the Door Community Auditorium. In a wacky ode to local flavor written by Dave Hudson, the three-person cast, featuring Chase Stoeger and Doug Forrest as two seat-of-the-pants radio disc jockeys and Molly Rhode as every caller, goes on a tour-de-force of theatrical skill while the storm wages war against unmanned radio broadcasting.

You might have guessed the kicker, too: the cast will perform all of the music live. That takes a so-called “triple threat” actor – an actor who can sing, act and dance – and adds another skill to the package. That’s the entire score.

“That’s the fun part, is that you’ve got the wow factor of seeing them play and perform, but you’ve also have a lot of laughs coming your way too,” Hudson said. “These are literally the hardest working actors in town.” 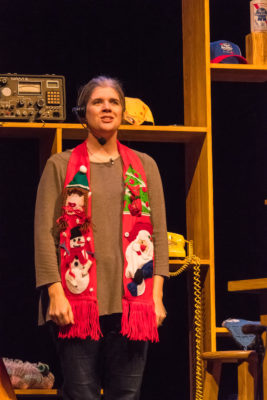 Molly Rhode plays more than a dozen characters of townspeople calling in to the radio station. Photo by Len Villano.

Hudson and Libman are Northern Sky veterans. This is the seventh show they’ve collaborated on for the company, with past titles including No Bones About It, Muskie Love, and A Cabin With A View.

Hudson got the idea for the show from an actual event in Minot, North Dakota, in which communication between the local police and the corporate-owned radio stations broke down in the wake of a hazardous material spill.

Both playwright and composer emphasized that Naked Radio is a show with heart.

“There was a sense of community and of optimism that really spoke to both of us,” Libman said. “The sense that radio was the thing that gathered communities together locally and kept them informed and shared their victories and defeats and the good and the bad [is] really something I spark to and I really feel has been lost, so it’s really nice to get this back, even for an hour-and-a-half in a theater somewhere.”

Libman’s prolific career composing for advertisers has left him with an exceptional skill for writing jingles, which take up a large part of the score.

The name, according to Hudson, has a double meaning. The first is the radio station itself is laid bare in the storm without the insulation of the corporate broadcasts. The other meaning suggests things get a bit unhinged in the station, though Hudson reassures us the play will be fit for Northern Sky’s usual audience.

As Naked Radio premieres, Northern Sky is continuing fundraising efforts for its planned creative campus. The goal of the public phase of the Constellation Campaign is to raise the remaining $2.3 million of the $6.7 million overall goal to construct the new buildings. The creative campus will include rehearsal space for Northern Sky productions, which currently have to rent out space around Door County in the months leading up to a show.

Naked Radio will be the final show of Northern Sky’s 2017 season. As the offseason approaches and the audience prepares to say goodnight to this outdoor theater filled with strange yet inviting laughs and world-class talent, nothing says “we’ll miss you” more than coming out to see what they’ve got in store this fall.

Naked Radio premieres Sept. 1 and runs through Oct. 21, and will be performed at the Door Community Auditorium. Tickets are $29/adult, $18/student, and $14/child. For information on show times and to purchase tickets online, visit northernskytheater.com.