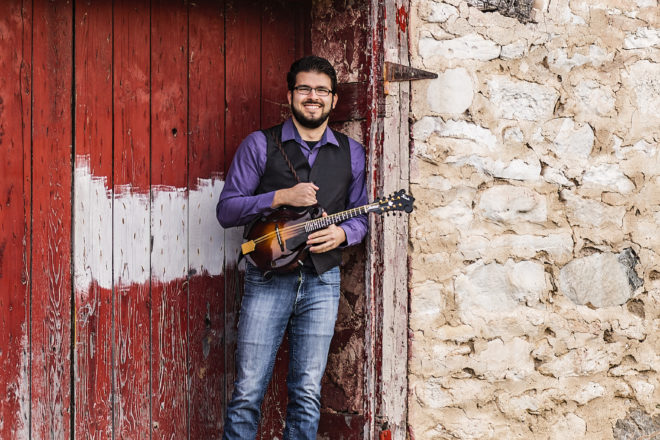 Nick Dumas played with Special Consensus at the White Gull Inn in 2019. This month, he’ll return with his new band. Pulse file photo by Len Villano.

Door County winters are quiet – too quiet, thought Andy Coulson. That’s why, in 1983, he started an annual winter concert series at his Fish Creek hotel, the White Gull Inn.

“The only experience I had was that I was a musician myself,” he said, and that he was a fan of folk music, having grown up during the 1960s.

His daughter, Meredith Coulson-Kanter, inherited her father’s musical taste. She grew up going to folk and blues concerts at her family’s inn, and even when she left for college, she returned home for shows in the winter.

So when she and her husband, Chris, took over for her father as the owners of the White Gull Inn in 2018, there was no question that they’d continue the series.

Putting the Shows Together

The cozy inn wasn’t designed for musical performances, but Coulson was familiar with the concept of house concerts, during which traveling musicians would perform at people’s houses in exchange for a place to stay. That way, people could enjoy free concerts, and artists could tour nationally and gain publicity on tight budgets.

This was the inspiration behind the White Gull Inn’s winter concert series. After a fixed-price dinner, staff remove the tables in the dining room and arrange chairs in rows in front of a small stage area where the band sets up.

The first few concerts attracted an audience of just 12-20, but those numbers grew quickly.

“We started to build up a kind of a clientele of local people, who, even if they hadn’t heard of the artists, enjoyed the opportunity to get out and see some live music,” Coulson said.

In recent years (before the pandemic, at least), the White Gull Inn’s dining room has regularly reached its capacity of around 70-80.

Though Coulson is now retired, he’s still heavily involved in the planning process for the winter concert series, especially with finding and booking performers.

“We try to shoot for bands that are nationally known, but not in the spotlight yet,” Coulson-Kanter said. “You kind of have to be out and going to music events to find these people, and that’s something Chris and I don’t have time to do right now.”

And although Coulson-Kanter has always enjoyed the concerts themselves, she and her father share many fond memories that have been made before the shows. That’s because they always invite the artists to hang out and eat dinner with them before the show starts. Some decline, she said, “but in most cases, they’re delighted for us to have dinner with them and get to know them, and those are some of our most favorite memories.”

Coulson-Kanter recalls feeling starstruck while meeting her favorite performers over dinner, while her father remembers lending a guitar to one of his favorite musicians, Tom Paxton, after the airline misplaced his own instrument.

After the audience had left following that show, Paxton treated Coulson to an acoustic performance of a brand-new song.

“We were just sitting there in the lobby, listening to one of my folk heroes playing a song that he had just written,” Coulson said. “That was tremendous.”

At the dawn of the concert series, Coulson booked artists in folk and blues because those were his favorite genres, but there are important practical reasons for sticking to those styles: the inn’s space and performance constraints.

Given the size of its stage area, the inn can accommodate bands of only about four people, Coulson-Kanter said, and although the building has a PA system, it doesn’t have the setup for electric instruments.

They also acknowledge that not everyone loves folk and bluegrass as much as they do.

“With any kind of music, pretty much everyone in the building is going to hear it, but we have to be a little bit conscious of the fact that not all of our house guests are attending the concert,” Coulson-Kanter said.

The pandemic forced the White Gull Inn to cancel several concerts, so Coulson-Kanter can’t wait for this year’s series, even though it’s shorter than usual. Typically, they schedule five or six concerts, but this year, they’re cutting back to three.

“We’re just sort of easing back into it,” she said.

The first show of the season, on Nov. 30, will feature Nick Dumas & Branchline, a six-piece bluegrass group fronted by a Door County local.

Third Coast Bluegrass, a band with deep roots in the Great Lakes blues scene, will play the second show, on Jan. 11, and Johnsmith & Dan Sebranek – two artists who have spent decades perfecting their acoustic blues sound – will come together for the final show of the series Feb. 22.

All concerts are held at the White Gull Inn, 4225 Main St. in Fish Creek. Shows begin at 8 pm, with an optional, fixed-price dinner at 6 pm. Purchase concert tickets ($30 per person) at the inn’s front desk, by phone or at the door (if the show is not sold out). Most shows sell out, however, so advance registration is recommended.