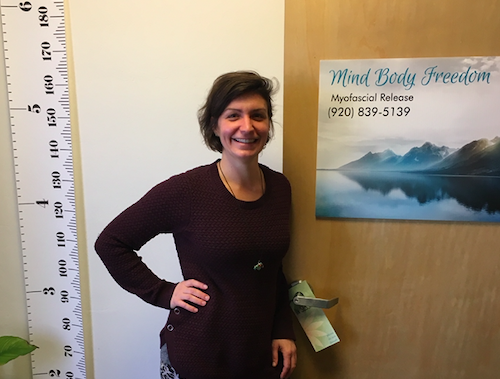 If you’ve never heard of myofascial release therapy, you’re not alone. I hadn’t either. But soon after I’d heard of it, I found myself on a massage table in Sturgeon Bay with occupational therapist Erin Tauscher, who’s launching her own practice.

Tauscher explains that myofascial release therapy (“myo” meaning “muscle,” and “fascia” meaning “connective tissue”) is a “hands-on technique of gentle, sustained pressure to release tightness, tension or pain,” she said. “It’s for anyone who may have pain that limits their movement or participation in life.”

To Tauscher, mind and body are intertwined, meaning that mind patterns can affect the way a body holds and carries itself. In other words, “We store issues in our tissues.” As an example, she shared that during her own treatment, she realized she had a fear of upsetting people. Her body would go into protection mode during those times by tensing up and turning her shoulders in to protect her stomach.

“I could recognize right away when I was shutting down in a situation,” she said. “It was like, ‘Oh, that’s your fear response,’ so then I could choose differently in those areas of my life. It was like my body was my compass.”

Tauscher has always been interested in alternative health and wellness practices, though she’s just as familiar with hospital settings: She works part time as an on-call occupational therapist for Door County Medical Center. She’s also a mixed-media artist. You can find her work on her Facebook page, Erin M. Tauscher Photography Art.

During the summer of 2019, she met a massage therapist who connected her with someone who was practicing myofascial therapy. She decided to have a session with him and loved it.

Tauscher then became an apprentice of sorts, consuming the work of John Barnes, internationally recognized as the leader in myofascial release; going to Chicago for coursework; and traveling to Sedona for month-long sessions while undergoing her own treatment and shadowing other therapists.

Tauscher practiced on family and friends, and when the weather was nice, she worked under a white fair tent in the backyard of her former home in Baileys Harbor.

In a matter of months, Tauscher decided to start her own practice, packed up her things and found a new apartment and space to work in Sturgeon Bay.

“I jumped in once I realized the value,” Tauscher said. “It’s a really good avenue to get in tune with your body and to let go of these tension/tightness patterns and open up in ways that you never even knew you could.”

I’ll admit it: I’m not in tune with my body. I’m a pretty pain-free person (besides the lower-back pain from sitting at a desk most of the day), so I was interested to see how this would help someone like me who hasn’t experienced any sort of physical trauma.

I was surprised to find that through a visual examination of my body, Tauscher could tell immediately that the way I hold my arms at my sides forces my shoulders inward, and that my hip bones are anchored toward the front of my body, causing my lower back to curve in.

That was before I even got on the table.

For the session, she suggested wearing a swimsuit for more direct access to my muscle tissue, though she encourages people to wear clothes if that makes them feel more comfortable.

Tauscher had me arrange myself in various positions to better target the areas that may be causing me pain – pain, I’ll add, that I wasn’t even aware of. She applied pressure to those areas and held it for three to five minutes at a time. Sessions typically run an hour and a half to two hours. During my time, we accessed about six areas. That isn’t a lot, she said, considering how much body there is to explore.

Still, Tauscher said, “You don’t get this kind of time in a clinic or in the hospital.”

Myofascial release therapy is meant to open up space. When you think about medicine, it’s about taking away a symptom, she said, but the symptom isn’t the cause of the pain. Opening things up can get at the root – the cause – of the problem. Sometimes releasing that tension can be painful, and even I was sore for the rest of the day.

Myofascial release is an active therapeutic process. During a regular massage, the client is generally just receiving throughout the session. By contrast, myofascial release encourages the client to constantly be responding and paying attention to what’s happening within the body.

In this sense, clients must be willing to actively participate and face what’s going on in their bodies. It’s up to them how many sessions they need: weekly, monthly or just a few times.

Moving forward, it’s Tauscher’s goal to partner with each of her clients, using a template she used with her own treatment and making it specific to them.

“Your body language is going to be a little bit different, but I open spaces, make observations and help you really learn the subtle language of your body,” Tauscher said. “Then you have that tool always. [Treatment] won’t be a forever thing.”

Just as the therapy is active for the client, it’s active for Tauscher, too. While applying pressure to the muscles, the client’s body can respond by twitching, shaking or shifting, so she must take a grounded stance and react to movements accordingly. Sometimes she can even feel tingling or pain move up her own arms.

“You can feel so much just right here in the moment,” Tauscher said. “You follow what the tissue does. That’s where I feel like it almost feels like you’re on a raft or a water ride.”

Tauscher’s plans include taking more courses, continuing to build her regular client base and growing into a bigger office space. She also hopes to link up with other myofascial release practitioners to create a study group.

“For me, [myofascial release therapy] helped me tune in to my internal voice that was a little more accurate,” Tauscher said. “It’s helping people on their journey to find themselves more. That’s amazing.”